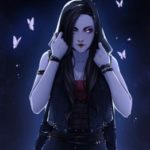 Powers
Telekinesis: the ability to move objects at a distance by mental power or other nonphysical means

Telepathy: the communication of thoughts or ideas by means other than the known senses

Shadow shaping: the ability to bend the forms of shadows to a desired shape

Shapeshifting: The ability to change shape or being into that of another person, creature, gender, species or other entity

Mind reading: the ability to discern what another person is thinking

Levitation: the action of rising or causing something to rise and hover in the air, typically by means of supposed magical powers

Empathy: the ability to understand and share the feelings of another

In order for Aaliyah to use this ability, she must maintain eye contact for extended amounts of time, and if a person is strong will may not be able to do so

Weaknesses
Sunlight: it isnt deadly in small amounts, but can cause dizziness, nausea, and slight skin irritation. If exposed to a large amount, she must stay out of sunlight for a long time, and is usually bedridden

Suffocation: dying from being deprived of air or unable to breathe.

Vampires have a venom in their fangs and humans with this venom in their system can then be turned by first feeding on vampire blood from the one who bit them and then on human blood. This endorphin also is pleasurable to humans and other creatures, and when feeding, it often numbs the pain. But for some, it can give a pleasurable result as well.

Aaliyahs personality is a complicated one. She has two sides. When she is happily fed, and content, shes a very flirtatious, sarcastic, and lewd woman. Using her sexual prowess, she lures men in with her voluptuous curves, and just when they are trusting, she pounces, and drains them. When not fed, she is irritable, weak, angry, and likes to hit things. It doesnt take much to cause her to snap.

When feeding Aaliyah is not very mindful of her prey. Often she drains them completely without a care for their lives. Rarely has she ever attempted to sire anyone, stating that family is over rated and deadly.

Despite her harsh exterior Aaliyah would love to be hugged and doted on.

Aaliyah hates being ‘protected’ however. She feels that if a man protects her, she is not independent, and will immediately close in on herself, pushing away others, becoming aloof, closed off, and rude.

If put in a situation she is not comfortable in (which is not often) Aaliyah usually is silent, withdrawn. Calculating everything, she doesnt normally miss a detail.

If the woman can feed from them, she is interested

For now the woman is single, due to fear of killing her partner. She is a loving, understanding significant other, but she often loses control. Fear that she will hurt, or kill her lover again has her putting off love, and sticking to oje night stands.

The night she got turned into a vampire, she had just turned sixteen. It was may sixteenth, 1843, and she remembers the night perfectly. She  had been walking along a cobblestone street, on her way to an apothecary for a certain tea for her father. She remembered being dressed in a simple white dress, nothing exotic or royal, just a mere peasants gown when suddenly she had been grabbed from behind, fingers wrapping into her raven colored locks harshly. Next thing she knew she was yanked down a side street, struggling, screaming and crying, but noone came to her rescue. Briefly during her struggle, she had looked up, glimpsing her attacker as he threw her to the ground, and leaped to straddle her chest.
What had once been a handsome man was now sitting atop of her, skin pure white, lips faded, and eyes an ugly yellow color. She remembered that he had  lifted his clawed hands, and landed a harsh stinging smack to one of her cheeks, claws digging in to leave deep scratches.
She had cried out, shoving at him and kicking her legs hysterically, while fat fearful tears streamsd down her face. She continued screaming, shrill, high-pitched horrified shrieks until he eventually shoved his fist in her mouth and began to drink from her. His fangs pierced her soft flesh, and hurt momentarily, causing her to cry out, until the pain faded. She felt nothing except slight, gentle pinches as he then let out a guttural moan.  Before long, she had passed out from bloodloss.
When she awoke she was in a hospital room, but it was dilapidated, and rundown. Her gaze slowly moved around the room, and she had gasped. He was there! But… He was different. Now, his yellow eyes were a soft blue color, and his skin wasnt as pale. His lips were pink now, and he smiled, revealing straight, perfect white teeth. He had called himself Luther.

For years she had hated Luther. Despising him for making her the monster she was as he taught her everything she must know. But she grew to love him, and he her. By January 4, 1849, they shared their first kiss beneath a pine tree. Years later, while living happily together, she had been dreaming. She was straddling her lover, claws digging into his throat as she strangled him. He was smacking at her arms, choking as she laughed sadistically. In the dream, she ripped his head off.

She awoke to a sickening sound, and realized that she was enacting her dream. It was too late… Her Luther lay beneath her, beheaded and motionless. She fled that night, horrified by her actions, and swore off love. Unable to live with herself, she had taken a sleeping draught. She slept for centuries peacefully underground, and now she has awoken. What will happened next for her, she does not know. But she does know that if she ever has another Luther, she will be sure to never hurt him. God knows the pain that she would endure, and she isn’t sure she could handle it again.

Aaliyah stands at five foot two and is lithe, with voluptuous curves, and  well endowed assets. Her torso is petite, her hips wide, and she had a full ass, with long, legs, thick thighs, and busty breasts she is usually the envy of woman. Her skin is a soft pale peach color, with hardly any blemishes, her hair long, the color of a ravens wings, and ends just above the backs of her knees. She usually covers her long locks in a beanie, for they are hard to tame. She has high cheek bones, and her silver eyes are dark, and alluring, and her lips are a pure ruby red, full, luscious, and tempting.

When she has not fed, her skin has an unnatural pallor to it, and her eyes usually become bloodshot.

While feeding, her eyes turn pure red (as pictured) and glow slightly.

Usually she carries an array of weapons, hidden in random places among her body. If ever undressing, she discards anywhere from twenty to thirty knives, hidden among her figure.

Well if they are ‘my secrets’ then they are quite obviously not yours to know.

That if you love once, you will always carry that love with you. Even if you love again, a piece of you will still love your first.