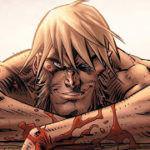 Adam was born in Canada during the nineteen twenty’s when his family found out that he was a mutant they disowned him. Now having to survive on his own in the wild he became cruel. At the age of eighteen he decided to pay his family a visit killing all of them and burning the place down. It was then that Adam found out that he enjoyed killing so he spent a his life brutally killing anyone that he crossed paths with he would name himself Lionfang. He loved killing well that was until he found the love of his life and woman named Julie. She alone was able to break through his cold shell and found the kind and scared person that he hides. They enjoyed six years together these six years were the best years of his life but that would all change when he came home to see Julie dead. Her death once again brought out the animal named Lionfang he would hunt down her killers savagely killing them he would only leave mutilated bodies. Now knowing that he would never be able love someone he returned to his life of killing that is the only life Adam Cree will ever know.

I won’t tell you so don’t even try

That I am a animal