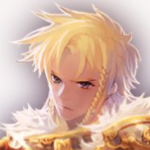 Glenn is from the planet Windermere, a planet that is colder than most and is populated by a race fittingly called the Windermereans. They’re a humanoid race that looks almost entirely human save for something called a “rune” which appears to be a gem like nerve attached to their hair that grants them some increased physical capabilities. Because of this, Windermereans often only live to the age of 30.

He serves the kingdom of Darwent in their air force division known as the Aerial Knights. Glenn aims to earn the highest rank of White Knight, so he trains incredibly hard to one day be granted such an honor.

A knight of Windermere.

Around 5’10”. Somewhat tan skin with blue eyes and short blond hair, and two diamond shaped blue runes attached to the end, one in a small side braid and the other swept behind his ear. He has black and gold armor, but most of the time he’s just wearing the lighter version of the uniform, which is a black vest, white shirt, and black pants.

It's better to burn out than fade away.