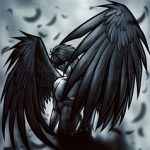 One way to find out.

Aero was a general in the army of heaven and fought in many wars against the demons. However he was asked to take the role Lucifer had left behind after falling from heaven and refused the position. However being that angels don’t refuse orders he had to flee but instead of fleeing to hell he chose to live amongst the humans. And he has since before they could talk. Once civilisation started he made a move to assist king’s and kingdoms with Intel and advising. And he did this until the modern day. Where he owns a large company that owns a piece of everything in the world.

Aero stands at about 5’10” and has short straight black hair. He is fair skinned and has blue eyes with irises that sometimes glow or change color to red. He also has two large black feathered wings that he can hide by turning them into tattoos in the center of his back.