A long time ago in the land of Gia. When the Dragons roamed the skies and the land was covered in green vast trees a disaster happened. A creature from beyond the stars fell on to the land and claimed the land of Gia as its own, later she was known as Beira the Ice Queen. Once   The one vast green land was beginning to fade, covering everything into cold white ice. Many chose to oppose her others followed her blindly. The first to fall where the dragons who were taken by surprise and instantly frozen at the Broken peak. The only dragon who managed to escape Beira’s gasp managed to form an alliance between human elves golems and fae, But even with their combined force. Beira’s power proven to be too much and in one last stand, the Golems and the Fae created a barrier between Beira’s realm and the last green exciting province. Creating a safe haven for years to come. In the midst of battle, the last dragon was about to be frozen but before that could happen. An arrow Shot by the Elven king pierced his heart killing the dragon before he could be turned into Ice. The Legend says that the spirit of the Dragon will be reborn into a new child who would liberate its brothers and sisters and reclaim the land of Gia once again. 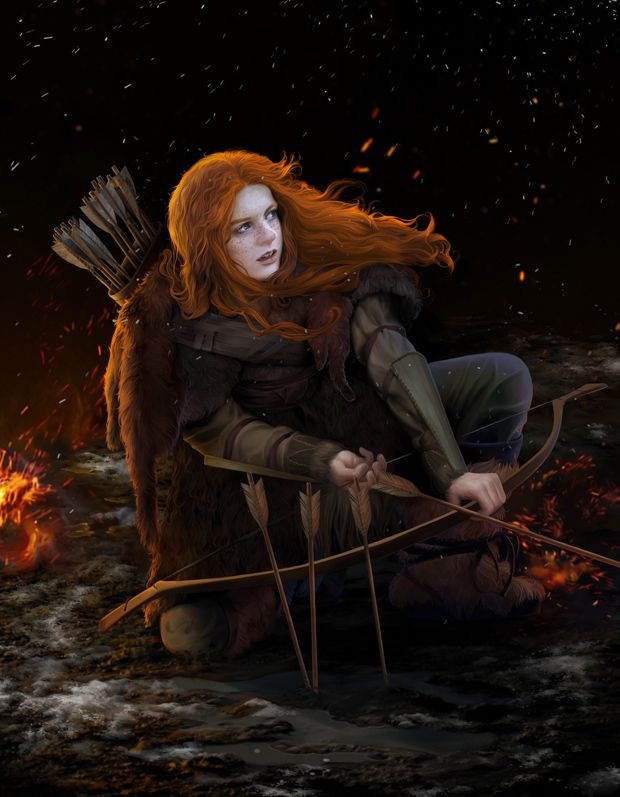 Aga was born in the safe Heaven. She is the daughter of Adhors the hunter. Since she was born Her father taught her the art of hunting and archery. Just like the other children in her village. She was told the story about giants and the Queen of Ice. Something that she didn’t believe despite the small evidence around her. Aga was more focused on getting along with her life day by day. When she arrived at the age of 12 her mother passed away giving birth to her brother. Both Aga and her father took care of her brother. When Aga reached adulthood her village was raided by a group of bandits, killing her father in the process and kidnaping her brother alongside other kids.  In retaliation, a small group of villagers gave chase to their kidnappers hoping to save their young.

The small group of hunters was able to follow their trail until the end of the valley. Where the mountains scratched the sky starting the edge of the unknown for them.

(the story will continue on the following blogs )

Aga is the type of person that someone would call both brave and cocky. Thanks to that every danger that she faces she does it with a smile and a quick playful remark. But in reality, she does it to cover her own insecurities and fears. She hides her true self in front of others’ eyes since she doesn’t want to be seen weak. Aga also can be more emotional and impulsive acting more on her feelings rather than logic. It can be said that one of her greatest strengths is that Aga is both a strong-willed person and loyal. Thanks to that she was able to step foot out of the edges of her world and continued on to find her brother. Even if that meant to risk her own life and face her own fears along the way.

Aga is a hunter trained since childhood. Her ability with the arrow is stunning making 9 shots out of 10. She can also scout her objectives for longs periods of time without losing its track and predict the behavior of wild animals and creatures.  Her footing is impressive she is able to run for minutes and moved through obstacles with ease. Despite that, she has great abilities at long range her close rage combat is something to be improved with. Her abilities with the sword are not that great and despite she knows some basic ways of the sword is not something that she relays with. Since most of the people can outdo her with it. (This note is created to remind the reader that she does not know about this herself ) Aga is also capable to manipulate heat to a certain point Since her spirit Is the same as the Dragon that died ages ago. Once she is doing this her eyes glow in gold fire and her skin slightly become translucid.