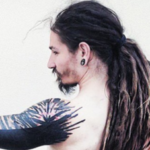 Aikaure was born in Japan to an ancient family demon hunters, and was quite good at his job for many years until his own actions caused him to be stuck as he was now.

His family served in the first true empire of Japan under Emperor Kimmei, and have served since then the country of their origin. Even now some of his family still protects the country but he was excluded as a result of his curse.  Around the age of 14 he slayed a demon that laid such a curse upon him with it’s dying breath, a curse that would change the boy and allow him to become the man he is today.

The curse replaced Aikaure’s innards with chains, some are barbed.. Some have hooks, but some how he manages to hide them well enough beneath the perfect skin suit he wears to look as he does. His human state is just as it should be, he has a need to eat, to drink.. The basic human comforts but at will he can allow his skin to tear and release the chains for battle at no harm to him.

The chains are magical in nature but are like most chains, breakable and easy to avoid for someone who’s as seasons a warrior as him but the chains also make the wielder harder to hurt.  He can only lift the curse through doing many good deeds, something he’s not exactly been all that great at accomplishing because his attitude can be a bit poor from time to time.

Aikaure himself however is not as old as his family, he’s only roughly around 35 though he’s stopped counting as his physical appearance hasn’t changed much since he was around 22 other than the few modifications he’s made that some how stick to the skin he wears.

He works as a servant and protector for the highest bidder, as long as the individual’s intentions sit well with the man of chain’s personal outlook on how things should be. He’s not an assassin so he’s not going to go killing people just because he’s commanded to do so.

5’9″, long black hair that can tend to be a bit messy especially if he’s battled recently. Tattoos on most of his upper body that tend to appear more visible if he’s not used his chains in some time. Usually wears business casual stuff, with a pair of good sneakers so that he can run if needed.

Chains, lots of chains. And what ever weapon he might be carrying at that moment, usually some form of short blade.

That one should remain silent and learn.