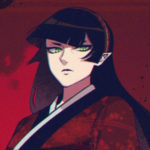 Current Status: Member of the Shinuhana, elite assassins of Lady Ruka, and guardian of Taki no Mura

Blood Scythe of the Okuyama

None of your concern…

Why are you asking me this?

“Tsukumogami (lit. “tool kami“) are tools in Japanese folklore that have acquired a spirit.” – Taken from Wikipedia

Birth of a Blood Scythe

Countless years ago, a family of highly skilled assassins passed along their lineage a particular kusarigama (chain sickle) among their most elite. This piece of heritage bathed in the blood of thousands, drinking it in for centuries. Eventually, this led to the weapon coming to life as a yokai, known as a tsukumogami, in the shape of a tall young woman.

The man who currently was in possession of the sickle was awed and frightened by the sudden birth of her. He respectfully implored her to continue to serve his family. The woman felt a sincere conviction to her symbolic status, and thus agreed to do so.

This contract carried on for seven generations. She would loyally follow each new son she was passed along to and travel with them. Whenever the need arose, she would transform into her weapon form to be wielded.

However, a demon of envy one day possessed the mind of one of the men in the family. He was jealous of his younger brother who inherited the chain sickle, when he, the eldest, would traditionally receive it. Overcome by rage and jealousy, the elder brother slit the younger’s throat in his sleep and stole the tsukumogami, using it to slaughter the rest of his family.

Distraught from being used to slaughter the ones she had so dutifully served for so long, the woman appeared, summoning chains from her own being to bind the elder brother, and from her arm, her own blade. She condemned him to follow his family in death then and there.

Without anyone left to serve, the woman left her home to wander, seeking a new place to reside. Her journey ended with her stumbling across the village of the Ketsuchi. Realizing that the residents here included other yokai, she considered stopping here, and was granted permission to do so by the village head, Nitsu Ketsuchi and by Ruka Okuyama, the head of the clan who the Ketsuchi work under.

Birth of the Death Flower

Here she trained vigilantly to join their militant ranks. Through the years she became very interested in Ruka, and started to desire to serve under her properly. Hearing of the elite Shinuhana, Ruka’s ranks of personal assassins, she soon became determined to be recruited as one. Her training would intensify and be redirected with this new focus. She constantly pushed herself, hoping to one day be called by Lady Ruka to face the trial to become one.

During her time in training, she served under Nitsu Ketsuchi, forming a very close bond with him. While he was very passionate tsukumogami, she was more reserved and focused. Regardless, she truly respected Nitsu and even started to grow a bit fond of him.

She was also trusted with the task of building a new village to expand the Okuyama’s influence, and helped oversee it while Ruka was away tending to more important matters. Ever loyal, she remained diligent, even following the brutal orders to eliminate all the builders once the village was completed without any hesitation.

Finally Ruka would summon Akane to a trial more grueling than she could fathom; a one on one battle with the fearsome mistress herself. The maiden managed to win the fight, earning her place among the ranks of the Death Flowers; the Shinuhana.

Thy Will Be Done

Akane travels a lot currently to carry out various assignments from Ruka, as well as to gather intel on various specimens. 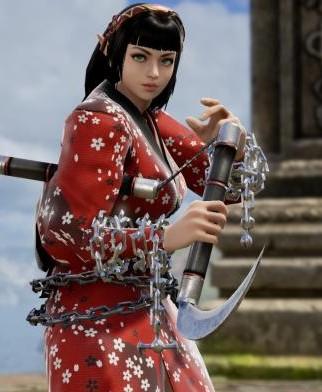 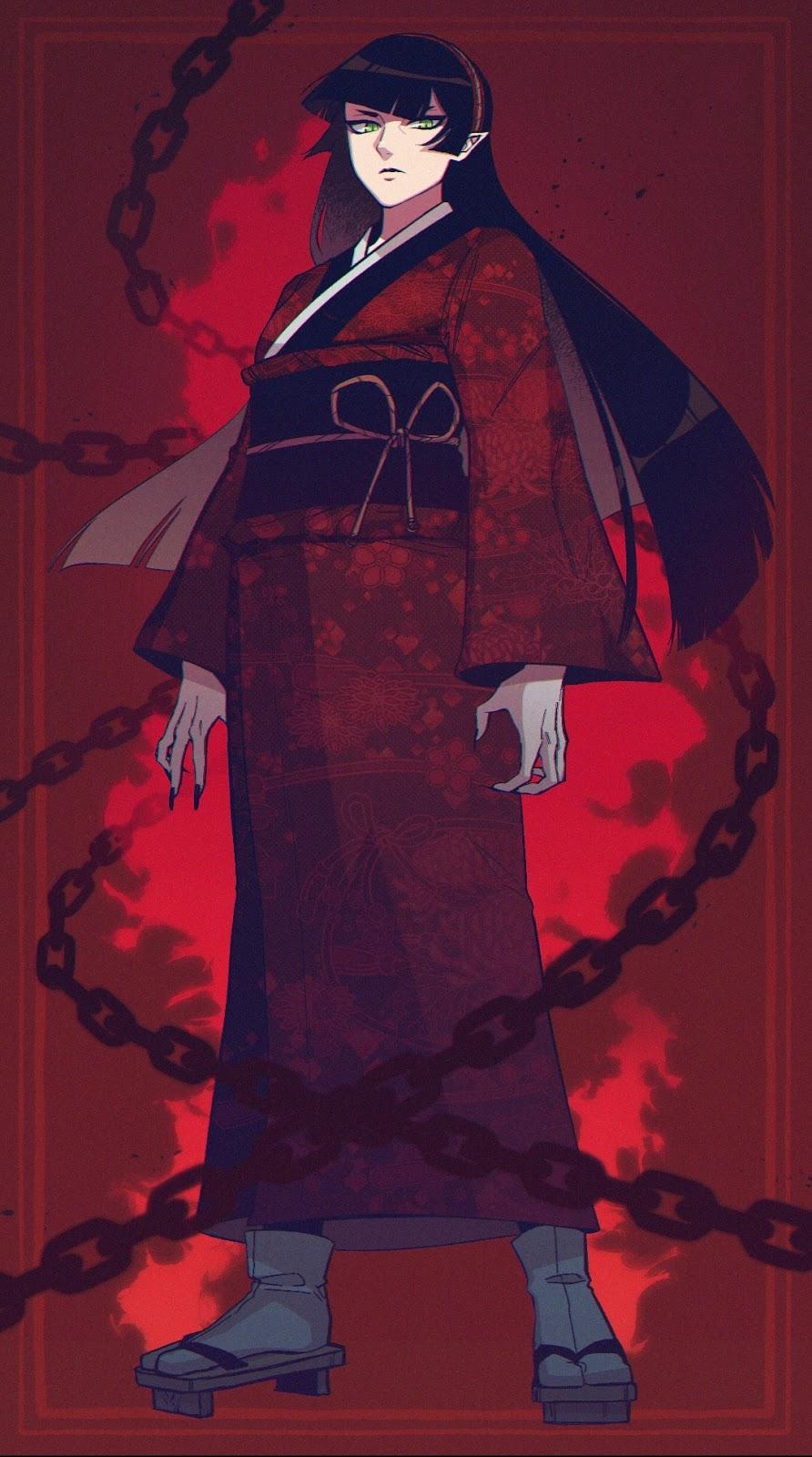 Personality: Focused and determined. She has a strong conviction and due sense of loyalty. First to the family she once served, and now to the Okuyama. She is not easily frustrated, but when she does get frustrated it gets messy. Otherwise she comes off most of the time as rather stern.

Transformation – Akame can return to her weapon form at will, or partially transform part of her body. This means she can extend her blade (usually from her forearm), or multiple chains from her back, or combinations of this. If she goes into full weapon form, she can be wielded by someone else, but can control her own movements so this is optional.

Agility and Speed – As she is training to be an assassin, she has worked to perfect her agility and speed, her yokai nature allowing her to exceed human limits. Being able to partially transform allows her extra flexibility, as well.

Blood Absorb – She can soak up spilled blood to regain her strength when weary in battle. She has been nicknamed by some as the Blood Scythe.

Immortality – She is technically immortal, unable to age or die. Only if both her human and weapon form are thoroughly destroyed can she ‘die’. She is still able to be greatly injured and feel pain. If her human form is destroyed, she can only be wielded by another person in weapon form, rather than fight for herself.