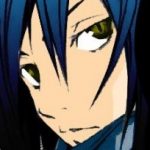 Short Description incase you don’t want to read everything…

Name’s are Akito, Agito and Lind.

Before this question comes up in every rp with someone not familiar with Air Gear. AT’s are a highly advanced Roller Blade that have blades on them sharp enough to kill there kind of like those one shoes called wheelie’s as the blade on them is not always out, but is kept sharp. They can be used to do things roller blades cannot such as grinding across telephone lines.

From the Anime/Manga Air Gear

As Akito he’s gay, a pacifist, kind, friendly, has normal amber eyes and normal teeth, a bit straight forward when it comes to showing other males he likes or is interested in them. His right eye is covered by an eye patch.

As Agito he has Slited amber eyes, fanged teeth, wears an eye patch on his left eye, foul mouthed, doesn’t like romance but is hinted to be bisexual.

Lind(Manga Exclusive character): Straight. He has over crossed twinkling amber eyes, spiky hair, fanged teeth. He is a play-boy towards Women, Ruthless towards males mainly, sadistic, disdainful, refers to Agito & Akito as “Babies”. He holds all memories of there Mother Gazelle due to him being the reincarnation of her, as such he is the strongest personality can easily over power Akito & Agito not just in control of the body but also in AT’s he’s the only Male character in the series to be able to ride the Sonia Road all other AT rider’s being Female.

PersonailtyThe youngest and dominant persona, Agito was created by Akito to cope with the mental stress created by his pacifist nature and responsibilities as Fang King. As such, his strength is derived from his desire to protect Akito. His devotion to Akito is shown in his match against Akira Udou, where he nearly sacrifices himself, believing himself to be the cause of his physical deterioration. Otherwise, he is an aloof and foul-mouthed character (his most-often used phrase being ‘FUCK!‘); despite this, he is nonetheless a valuable asset to Kogarasumaru. He is not to fond of romance, and is completely oblivious to Yayoi Nakayama’s infatuation with him. Like everyone else, he refers to Ikki as “Crow.”The dominant personality prior to Agito’s creation, Akito is Agito’s polar opposite in almost every aspect. Timid and gentle, he was trained by Kaito Wanijima to be the Fang King, and is referred to as his. He was originally the Fang King. It is hinted by Agito that Akito is more frightening than Agito when angered during Kogarasumaru’s first encounter with Tool Toul. feminine both in behavior and appearance. He is homosexual considering he stole Itsuki Minami first and third kisses. For unknown reasons, he is terrified of the Trophaeum Tower probably due to the Brain Charger Project, which subsequently resulted in his creation, or the fact that Lind’s personality, the senior and original personality, was the first generation Thorn King later to be revealed as the Thorn Queen Gazelle.The last persona to appear in the series,is the ‘First Personality’ of the body. Lind’s personality is actually a copy that of Gazelle, the first generation Thorn Queen, also known as the ‘Wings of Beginnings’. He inherited her abilities and memories and is the mother of Agito and Akito. He is metaphorically referred to as the ‘Seed of Judas’, planted within Kogarasumaru to sabotage them. When his person was grafted on, Lind’s consciousness was too much for his body to handle; Akito, and by extension Agito were created from the resulting mental turmoil, while he went into hibernation, awaiting his body’s maturation. He is the Brain Charager No. 0 and prototype for Sleipnir, making him their senior. Ruthless, sadistic and disdainful, Lind regards Akito and Agito as ‘babies’ possibly referring to the fact, Lind technically has the personality of their mother, and has a playboy attitude towards women. He does have a caring side though, as he was smiling when his youngest ‘brother’ Agito reasserted control of the body. He is also very protective of “Kaito Wanijima”, seeing as he mentally snapped when he saw Arthur and Shalott beating them up and proceeded to attack the duo with the intent of killing them. He also has a vendetta against Nike Takeuchi, as he calls him his “prey” and says he’s been after him for a long time. Lind is also most likely the sole male character in the series that can use the Sonia Road due to the fact that he has the memories of the original Thorn Queen Gazelle who owned the original Thorn Regalia. Bloody Road riders in their own right, and share the shadow, which appears as an elongated, multi-finned shark.Akito- enjoys using lots of proverbs, strawberry milkshakes, his favorite animals are birds especially crows, his favorite colors are blue, green and yellow.Agito – BOSS coffee, his favorite animal are sharks, his favorite color is red.

As far as Sexual Orientation goes it depends on what side is in charge as Akito he is gay, as Lind he is straight and as Agito he isn't necessarily interested in anyone it is slightly hinted he might be Bi-sexual though.

How they were created:Akito/Agito/Lind’s mother, Gazelle, was pregnant at the time of her death. When she died in the polar waters between Japan and Russia, her body was preserved by the cold sea. Her body was retrieved and the fetus was removed and artificially enhanced by a mysterious benefactor.

Bearing a striking physical resemblance to their mother Gazelle, Agito, Akito and Lind are an effeminate-looking teenager with a slight build and shoulder-length, dark blue hair. They are 14-15 years old when first introduced, aging only 6 months as the series progresses. They are 142cm(4’8″) tall, weigh 38kg(84lbs) and have blood-type AB. Their usual attire consists of an eyepatch, black pants, and black jacket with the Kogarasumaru emblem emblazoned on the back. They used to carry straps with hooks that could be wound around their legs and used to bind enemies. When first introduced, their attire was an orange straight-jacket with stripes along the sleeves and front, an eyepatch, white pants, with their usual straps with hooks. Additionally, each personality has its own distinct physical appearance and traits:As Agito, he has amber eyes with slitted pupils and fanged teeth. His left eye is covered.Akito, he has amber eyes with normal pupils. His right eye is covered.As Lind, he has Over-Cross Twinkle Eyes, spiky hair, fanged teeth and both of his eyes are uncovered. [See Avatar for a slightly different Lind appearance]

Nonetheless, there are distinct differences in their abilities:The current Fang-King, Agito ranks among the top. In combat, he is exceptionally collected and focused, possessing keen instincts and analytic acumen. This, combined with his ability to perform moves after having seen them just once, has earned him the moniker of Genius Fighter. His initial R.E.A.D. level, which rises to 99 in his duel with Akira Udou, and 122 during the battle with Sleipnir. During the battle with Arthur and Shalott, Akito mentions that he and Agito’s R.E.A.D Level is now standing somewhere above or close to 200.Akito, a former Fang King, is actually even stronger than Agito; however, he refuses to ride A-T’s due to his pacifist nature. Nonetheless, he is able to fight indirectly through Agito by lending him strength, boosting Agito’s capabilities significantly. Akito was also Agito’s tuner prior to Yayoi Nakayama’s ‘awakening’although he could not fully realize Agito’s full potential because he lacked the ability to sense biorhythms.Lind:Inheriting the “Wings of Beginnings”, “Gazelle” abilities and memories as a Brain Charger, Lind displays inhuman skill with A·T’s. In his debut, he easily dominates an opponent that Agito/Akito combined could not even put a scratch on. When he lends ‘half’ his strength to Agito, they have a R.E.A.D level of 302. Considering that information if he did indeed lend Agito half of his power that means Lind would have a R.E.A.D level around 360. The secret behind his strength is a hybrid combination between Sonia Road’s flexibility and Bloody Road’s sharpness and destructive power. Controlling these two powers is the Flying Heart, the “Virgin Blade”.His A-T is named Sand Tiger which has a bladed ridge on its vamp and serrated wheels. The Fang Regalia’s core,Bloody Armor, is installed in its wheels. Initially, Akito was only able to bring out 24% of Bloody Armor’s total power; when appropriately tuned and deployed, Sand Tiger’s front wheel guards jut out to resemble a shark’s fin, and the wheels split along their serrations into a saw-blade configuration.Tricks:Solid FangAGITO Ride fall Bloody roll, soul 1800°Backward Cross Ridefall Upper Fang “TWINCAM”Fang GrindAGITO Bloody Fang Ride fall “Leviathan”Gigaers CrossCage of FangsBloody Road: Infinity JailAGITO Bloody Blade FangAgito/Akito X Kazuma: Grand Fang Fire BirdBloody Road: Saucer Crush