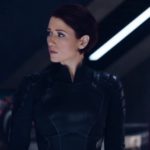 “It is our job to take risks. We run into the line of fire. We face enemies that no one on this planet has the courage to.”

The Department of Extranormal Operations (D.E.O.)

Superfriends (in secret. Though those of the Crew know they’re a part of it)

Bio-Engineer of the Department of Extranormal Operations

Co-Captain of the Crew 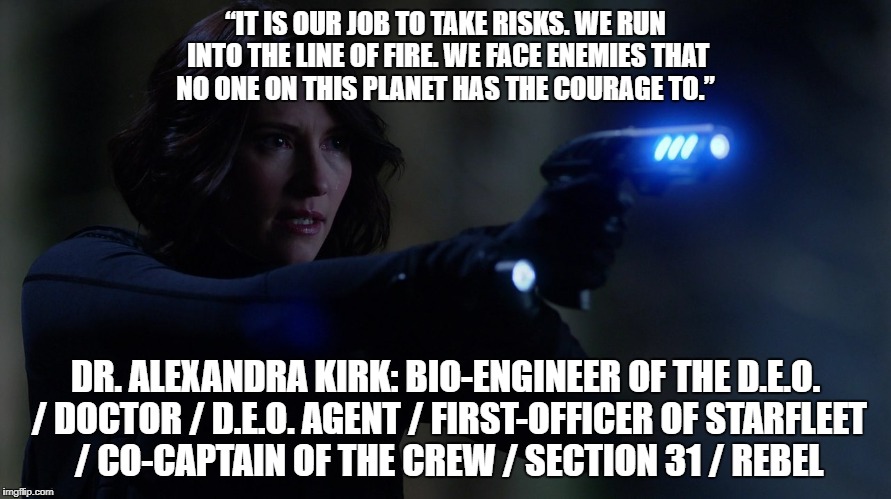 Bio-Engineer of the DEO / Co-Captain of the Crew 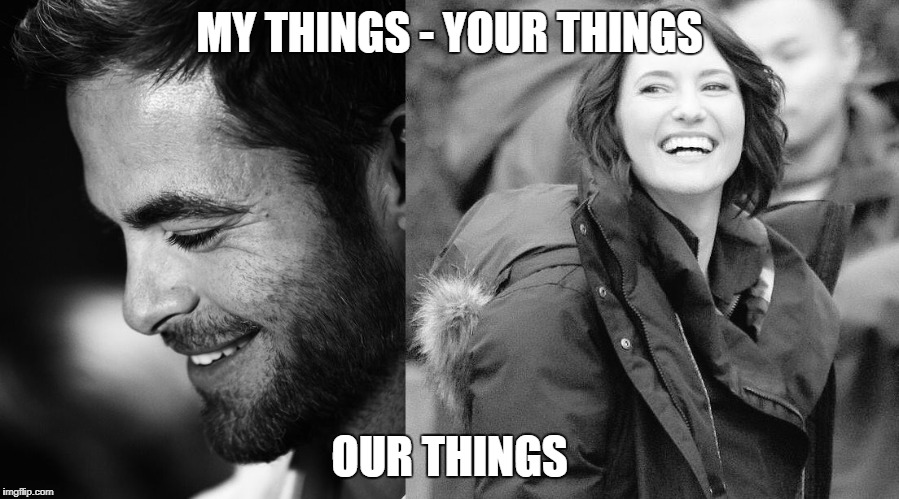 James T. Kirk and Alexandra Danvers got married the 30th of December 2017

Their son, Tiberius Karlex Kirk was born the 6th of February 2018

”James is my everything.”
”My one and only love.”
”Now and forever.”
”My guiding light.”
”My shining star.”
”My beloved husband.”
”James Tiberius Kirk.”

As a person, Alex is both independent and courageous, oftentimes facing danger head on. She is also caring, confident and headstrong. Alex also shares the same passion as her parents for bio-engineering. Most of her time has been spent protecting her adoptive sister, Kara Danvers, resulting in her having had little time for herself since childhood.

Loyal (romance and at all times) 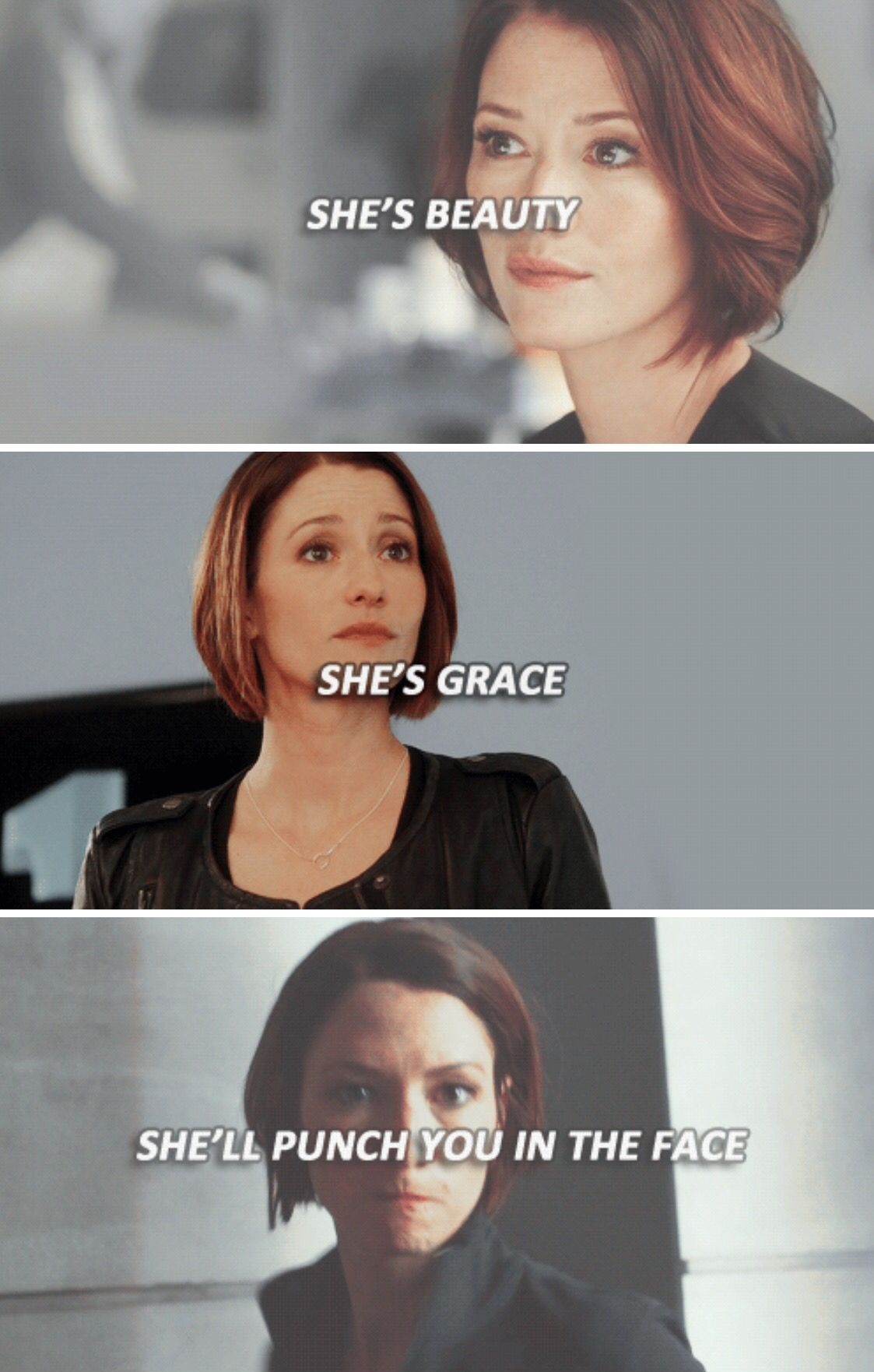 Hobbie the Hobgoblin – ally & friend (played by me)

Lt. Commander Whiskers – Jim & Alex’s cat, who is one not so ordinary cat… (played by me)

The Associate – Unknown (played by me)

”Together we can accomplish anything.” 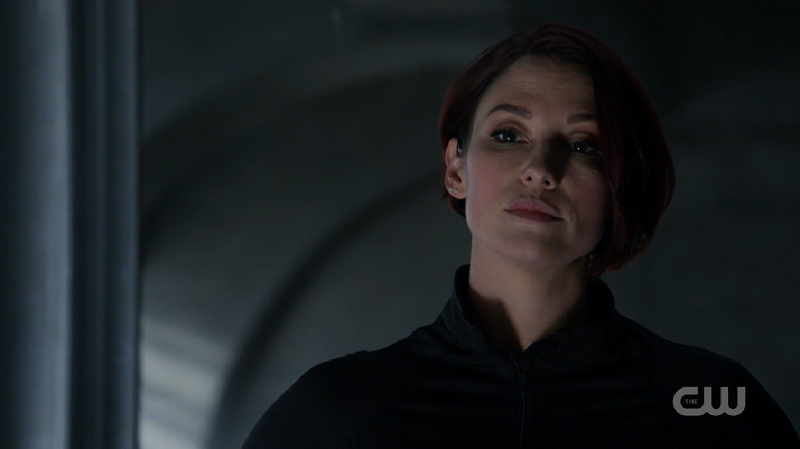 ”Wearing high heels is as painful as being punched by a Kryptonian.” 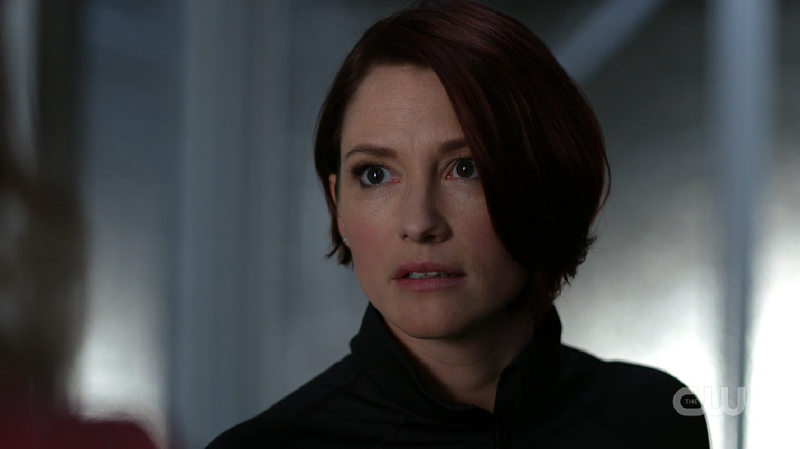 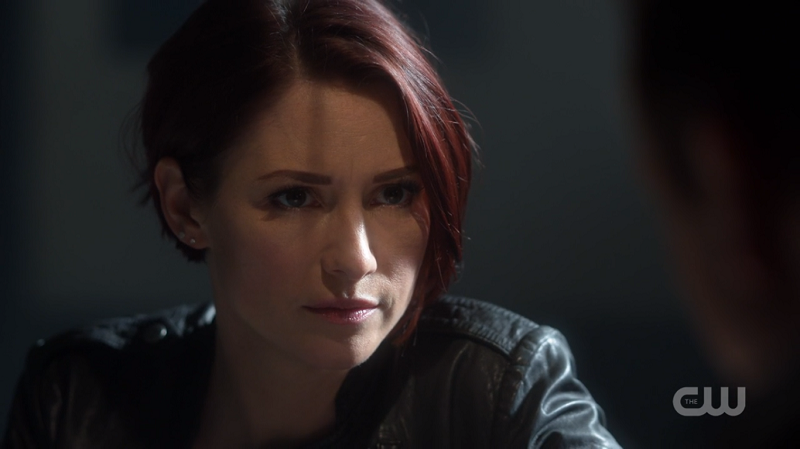 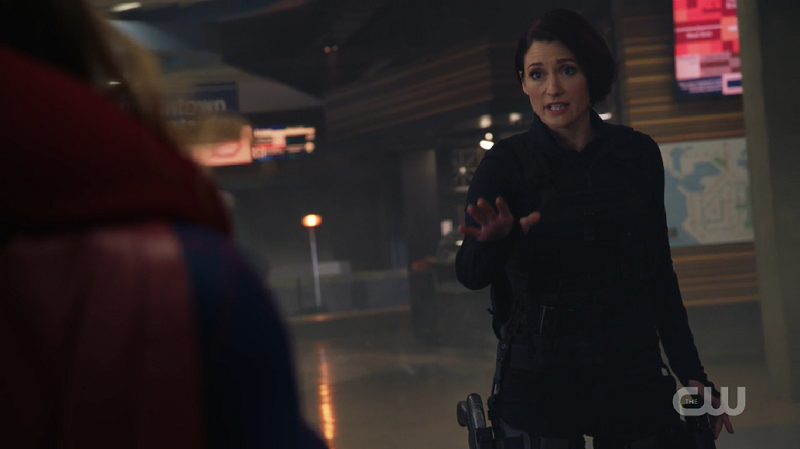 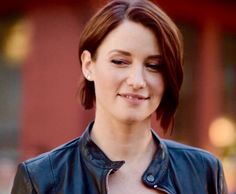 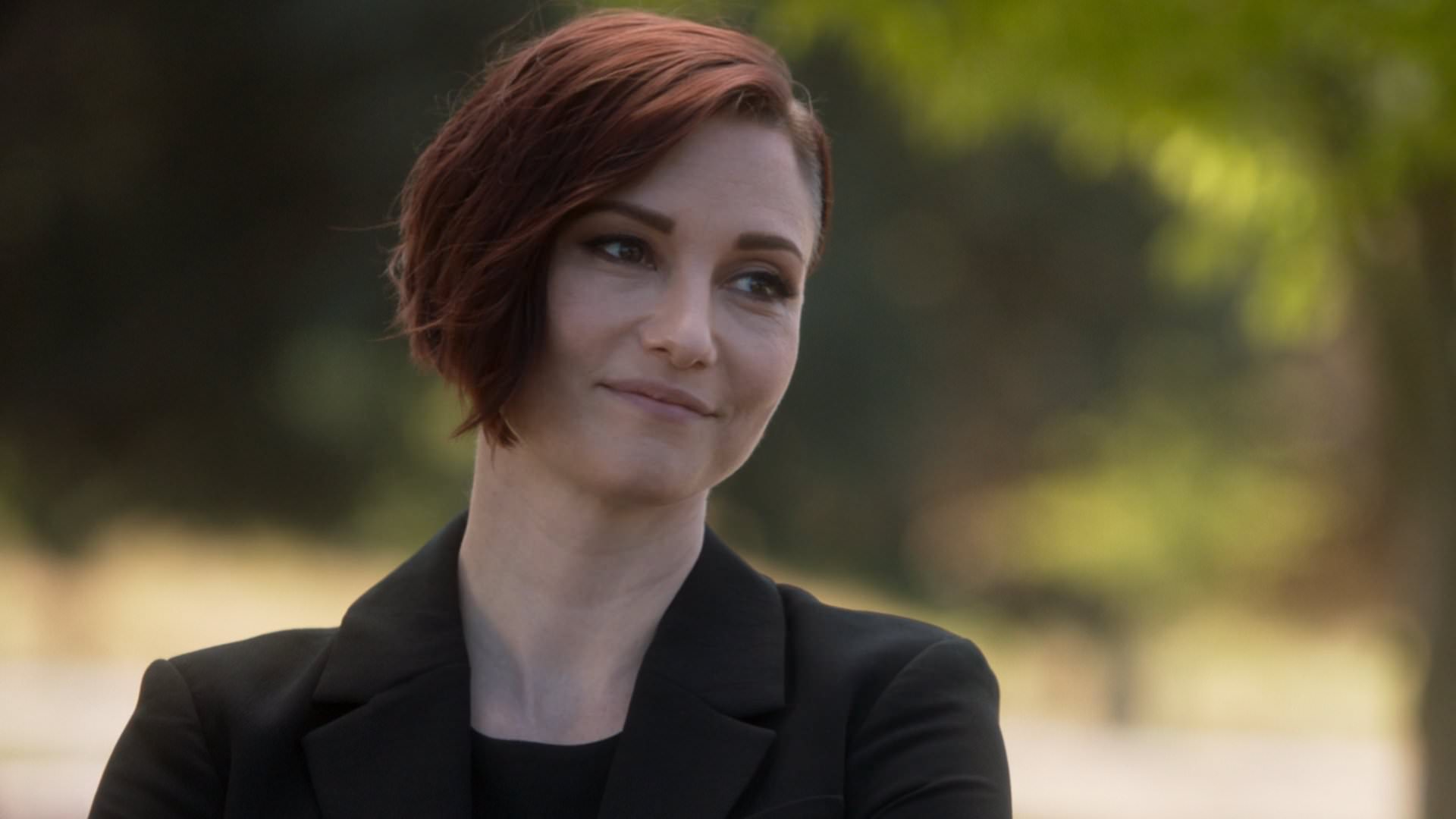 + Genius-Level Intellect/Expert Scientist/Expert Tactician/Leader: Alexandra Danvers displayed a sharp intellect and aptitude towards science since early childhood. She showed great interest in science fairs as a child. She was pursuing an MD/PhD at an accelerated rate and managed to finish the PhD portion by the time J’onn recruited her to join the D.E.O. at the age of 24.

Her PhD in bio-engineering means she’s an expert when it comes to alien physiology and her expertise has been used on several occasions while working for the DEO.

Aside from a bioengineer, she’s also a neuroscientist and xenobiologist. And recently she also became a doctor, thanks to her husband, Captain James T. Kirk.

Alex is also an expert tactician and extraordinary leader.

+ Peak Human Physical Condition: After a full year of training at the DEO, Alex is in top physical condition with heightened relfexes, strength and durability. She often puts herself through excessive training to stay in shape and keeping her physical condition at peak capacity.

+ Expert Medic: Alexandra has performed medical procedures on humans and aliens alike. Anything from physical to psychic attacks/injuries.

+ Expert Hand-to-Hand Combatant/Martial Artist: Being an Agent, Alex is an expert when it comes to unarmed combat. Due to the requirements of the DEO, Alex spent an entire year in training before even being sent out on the field. The training involved 12 hrs/day for 5 months in a training room, among other things.

The training has definitely paid off, since she’s been able to defeat multiple aliens at once with ease.

+ Expert Interrogator/Torturer: Alexandra Danvers is an effective interrogator and torturer, thanks to the training of the DEO. She claims she knows six ways of torture with just her index finger.

Her interrogation technique knowledge is so advanced that she has managed to fake the results of a polygraph test.

+ High Pain Tolerance: Alex has shown that she’s able to withstand high amounts of pain. Prime example would be when she snapped her credit card in half when she was kidnapped. The broken edge of said credit card was then used to cut deeply into her skin on her shoulder in order to remove her subdermal tracking chip. Alex barely showed any reaction at all during said procedure.

+ Expert Markswoman/Firearms: Thanks to the DEO training, Alex is an expert when it comes to firearms.

+ Expert Markswoman/Firearms: Thanks to the DEO training, Alex is an expert when it comes to firearms.

+ Skilled Swordswoman: Alex managed to fend off various Kryptonians with the use of a Green Kryptonite sword. Said sword is one she has kept, even to this day. It was also the sword that killed Astra In-Ze, the aunt of Kara Zor-El.

+ Expert Driver/Pilot: She is an extremely skilled pilot, being able to drive both common vehicles, as well as flying spaceships.

+ Skilled Stick Fighter: When the unnamed alien bar in National City got attacked, Alex used a pool que to fend off armed forces in order to defend herself and her friends.

+ Force Sensitive: At one point in time during her stay with James Kirk and their time on Hellifyno, her connection to The Force was awakened. Gradually she learned and studied more and has become rather skilled in both lightsaber combat and in the use of The Force.

+ Lightsaber Proficiency: The skill that allows a Force user to use a lightsaber without harming themselves.

* D.E.O. Tactical Suit: While working on the field, Alex wears a special protective suit made of an unknown black material. The suit also offers some stealth capabilities.

* Kryptonite-Powered Exosuit: Alexandra also has a cybernetic exosuit that is powered by Kryptonite. The suit itself physically enhances her abilities, such as endurance and strength. The forearms of the exosuit are equipped with Kryptonite-powered energy guns that can create green, concussive shockwaves to physically repel and incapacitate opponents. Especially Kryptonians.

* Maaldorian Laser Pistol: During a rescue mission on Maaldoria, Alex acquired an alien gun from a fallen alien. One she has kept ever since. The pistol is powerful and once it hits, it sends the target flying a couple of feet upon hit. It was once used to take down a White Martian. 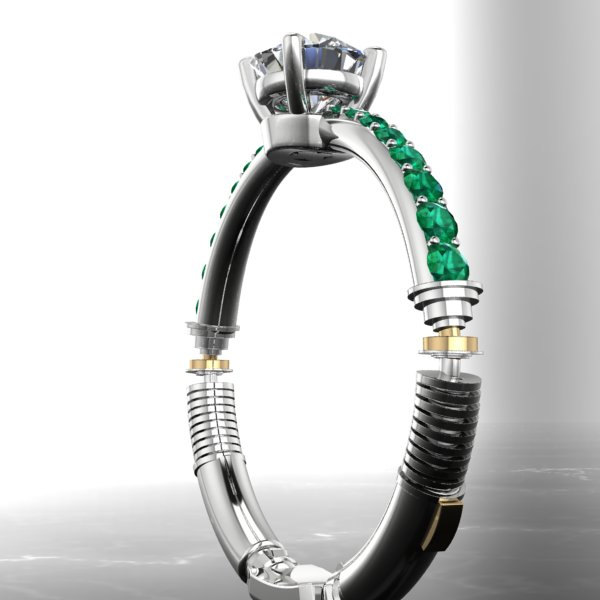 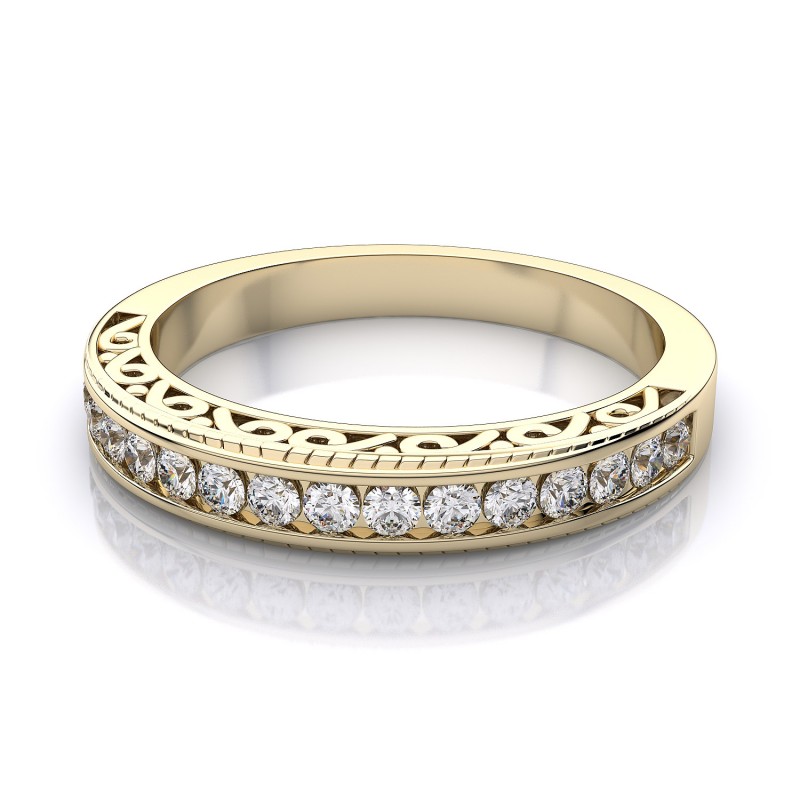 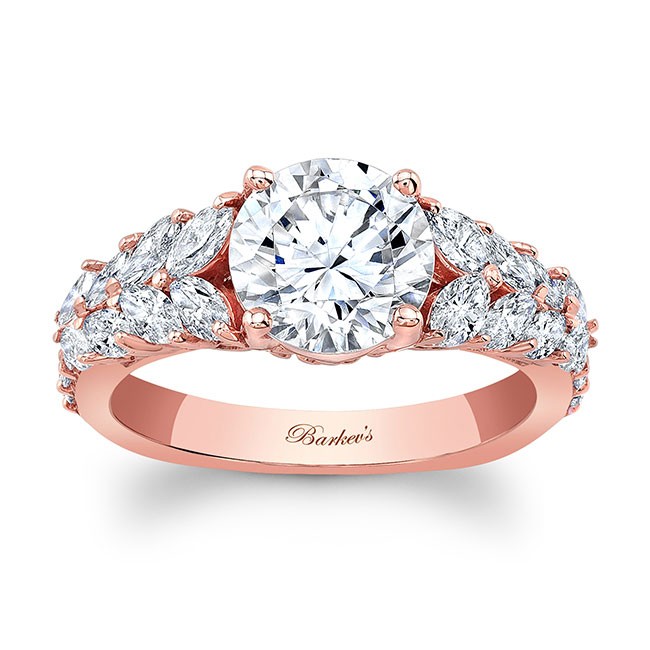 Federation Jumpsuit Uniform for the baby of Jim & Alex. Given to Alex by Eliethiya Daniels as a Christmas present 2017.

DL-44 Heavy Blaster and top of the range medical kit. Given to Alex by Koppa as a Christmas present 2017.

Immaculately-forged long knife. The knife has a button similar to that of a lightsaber and has faintly glowing runs on it. Said runes say ‘Quantum Unitm Est’ (United As One). Compact, easily concealed and also able to cut through the same materials as a lightsaber. Given to Alex by Helveraccoon as a Christmas present 2017.

A crib and a blanket for the baby that Alex and Jim are expecting. The blanket helps with growth, growth of body and soul. Said spell fades when the child is at the age of 15. Given to Alex & Jim as a Christmas present 2017.

A silver chain with a sapphire attached to it. In reality, said chain is able to summon a ballistic proof armor for Alexandra Kirk. Given to her by Chitose Tsuru.

Two property deeds and farming certificate. Given to her by her husband James T. Kirk as a Christmas present 2017.

* Alexandra gave up her medical career for the sake of her adoptive sister, Kara. Although seeing as she’s working with bio-engineering (which is similar in ways), one could say that it merely took a different route, rather than being tossed aside completely.

* When asked about her job, Alex often says she’s an ‘overqualified nurse’. Which is both true but also vague. Dr. Alexandra Kirk is allowed and able to perform any type of action a nurse would. Just not surgery. Then biological engineering involves way more than patching people up and giving them injections.

* Alex seems to forget about eating whenever she’s stressed out.

* Alex never eats sugar in the middle of the day.

* Her choice of alcohol is beer and red wine.

* Her new favorite drink is whiskers whiskey, thanks to her husband James Kirk.

* According to Kara, no one can drink Alex under the table. In other words – she knows how to handle her alcohol.

* She isn’t keen on vegan icecream. Alex had to eat it, due to losing a bet.

* She drives a motorcycle. Whether she has a car or not has yet to be revealed.

* Alexandra enjoys playing pool and if rumor has it, she’s also rather good at it.

* Alex and Kara have something called ‘Sister Night’, which often involves eating something good while watching a show on TV. It’s unlcear how often this happens but once / week seems likely.

* She has been a fan of the rockband Barenaked Ladies ever since college.

* Her sister, Kara, claims Alexandra has been through a ‘weird punk phase’ at one point in her life. Perhaps it’s still her go-to music when no one is looking? Never know!

* According to her mother, Eliza, ‘keeping secrets doesn’t agree with her’. In other words, Alexandra isn’t very good at lying or keeping secrets from people.

* Alex has actually been on another planet, besides Earth. The planet in question is Maaldoria (a.k.a Slaver’s Moon). She totally kept the gun she found on said planet.

* She likes pizza and enjoys it more than most foods. However – her mothers lasagna is definitely on a shared number one spot!

* Alex had chicken pox when she was in high school.

* Alexandra wants to be a mom and have kids one day. She wants to teach her kid/s to read, how to throw a punch, how to write cheesy Valentine cards and hold them when they have a bad dream.

* She also knows that Kara will be a ”slightly nerdy aunt”.

* Her favorite color is blue.

* Alex’s own, famous eggnog is referred to as ”Highly intoxicating and deliciousness.”

* She once snapped her right-leg tibia in half. An injury caused by Reign.

Alex Danvers – Ready or Not

Alex Danvers – Are You Gonna Go My Way

Kara & Alex – I Just Feel Better When We’re Together

Kara & Alex – Find My Way Back to You

Kara & Alex – I Feel at Home with You

The Brothers Bright – Me and Mine

In my husband, James T. Kirk. My sister, Kara Danvers. The Crew. Corn. In doing the right thing. My family. Protecting my family.