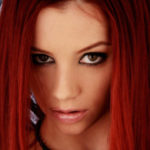 Birthplace: On a small Island

Sire:Alluvial (Whom she loves to death)

Hobbies: Ameila loves to sing , Her favorite songs to sing are slow songs , She loves to write and draw , as well as reading.

Ameila was born , Ameila Le’Mort , She dosen’t remember much of her past or of her birth parents , She remembers details here and there but that is about it. One rainy night , Her powers grew out of control .. ending her younger brothers life , Damian Le’Mort.

After words , Ameila escaped the island and soon found herself living on the city streets of Ravenblack. She wondered around for years by herself , She met and fell in love with a man named , LandKaster. .. They dated for a year then he asked her to marry him , She agreed. .. then he cheated on her. Leaving her heart broken.

Years went by and then in 2011 , She met a young Demon named , BaaL.. And once again fell in love , After six months of being together he asked her to marry him , Happily Agreeing. They are now happily engaged. Ameila and BaaL are going to wait to bind , Until they are fully powered that is , Ameila is also a Water and Fire Elemental , Only she dosen’t know this for those powers have been locked away inside her by a tear-drop shaped pendant around her neck. Ameils must always keep the pendant on or death would surely follow if it were to be removed.

Then amazingly by chance , Some may call it that but she calls it fate , She met Alluvial. Ameila and Alluvial talked for a month before Ameila decided to sire under her. So , Ameila then sired under Alluvial and will remain sired under her

Ameila now resides at , Halls of Astrate with her loving family. Ameila sometimes wonders about her birth parents.

A crescent moon shaped pendant that she has had since birth