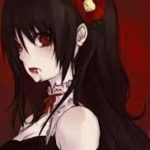 What am I the answer I don't know

Well if you truly want to know my story then you must be willing to see the picture in the blood. What’s that you can’t see it then before the night is up you will know my story. Growing up I was never anything like the other kids at the orphanage. No the first time the adults who own that place looked into my eyes they could tell. What they could tell was that something in me was truly evil just waiting to take over. The first incident happened when I was walking on the edge of the garden when it happened. The first time I tasted blood my own blood to be exact while I was walking Billy one of the older kids threw a rock at me. This caused me to lose my balance as I fell my hand caught the edge of the cement leaving a cut with blood running out. To this day I still don’t know what made me do it but once my eyes saw the blood my hand moved towards my mouth. It was like I could not control the urge to drink my own blood and once I started what I felt next was the most enjoyable feeling ever. Well, that was until the owners caught me I was punished severely for this act. They chained my hands and feet to my bed and left me there like that for the rest of the day and on into the night. Once morning came they unchained me telling me to never do that again but this cycle went on for years until I was sixteen. One night the male owner came into my room he kept telling me how beautiful I am well after he made an attempt to lunge at me my eyes caught him and he froze in mid-air just above my bed. What came next was every drop of his blood fell onto my bed After he died I felt something running down both of my eyes once my fingers touched the substance I knew what it was. This substance was blood from my eyes well after I did the same thing to the female owner having the same effect on my eyes I left the place that I have grown to loathe. But once I stepped outside I saw the world in a different light for while some live in black and white I live in the red just by looking at someone their blood tells me every sin they ever committed. I am now nineteen and I have found that I have to feed on blood before the hunger can set in for once it doses the voices they never leave me alone. Now I am going to leave you here goodbye.