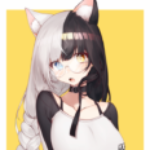 “Is the camera on??”
Yes. It is. But I’m narrating, remember?
“Oh yeah!”
Karma Valentine Amour is a very… Interesting girl. raised by her aunt Margo, living in a small, quant town called Shibaro, where many Neko Cats lived. Among them was Amour, of course. She often dreamed of becoming a big star, modeling for magazines and acting in movies. So when she was brought ideas to be in a brand new show after acting in many commercials, she took it. The show was called, ‘The Sweet Death of Marklyn Rex.’ after Amour stared in this show as the main character’s love interest, Amour’s career quickly took off. Today she is modeling for a magazine called ‘Lunar Dusk’ with her cousin Quill.
But her career path was one thing, family life was different. Amour had to take more and more time away from family and grew apart from her Aunt and sister in the process. This lead to major fights of which Amour hasn’t talked to her Aunt in years, sometimes talking to her sister.

One blue eye, one yellow eye

“Well, I’m a model so I have a fair amount of clothing.”

"Success comes with prices to pay."