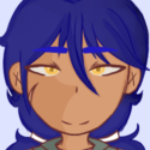 Uyeda Koton. The 'protagonist' of my crazy story.

Honestly, I don't really care at this point.

“Relying on others isn’t really my thing.”

This is a bit obvious, considering his talent, but he enjoys the idea of the butterfly effect and the chaos theory.

Uyeda enjoys expressionism because he believes that the art form of people showing how they feel, a topic they want to talk about, or anything else is impressive, and he wants to replicate it one day.

This is quite simple, but Uyeda enjoys birdwatching. He first started it as a test study but now he’s hooked on them.

Uyeda hates this idea because he prefers to live in the moment. He doesn’t like thinking that there is fate or a predetermined destiny for himself.

Uyeda dislikes being asked multiple questions at once, or being overwhelmed by his own questions. (If that makes sense.)

Uyeda thinks that focusing on something that you can’t change is silly.

Uyeda is generally pretty chill and calm when interacting with others he is acquainted with, and he is basically the same with everybody. The only time he gets frustrated is when he is faced with a situation where he is destined to fail. He doesn’t really think too much on how the past could affect the present or future, as he commonly focuses on the “here-and-now”.

As a 10 year old, Uyeda’s parents had divorced, and as a child, the constant back-and-forth between parents had made him unsure if he should love one or the other, as he thought he couldn’t love both without the other being angry.

This was the main cause of him not having a very strong connection with his parents.

Uyeda’s friends had made him feel a sense of comfort when he didn’t feel he could confide in his parents, which helped him discover his enjoyment of art, mainly because his friend Muruda Ito has drawn a lot, and he always admired and idolized her.

Uyeda’s enemies are on the list because they sort of motivated him in an odd sense. They were just average people that didn’t really support what he did, and when he was in high school with them, he always wanted to “prove them wrong” and sort of passive aggressively send the message that he turned out to be successful.

Currently, Uyeda is residing in his own personal residence. He normally remains in solitude, but that could change. His current list of allies is empty, maybe you could be the first.

Uyeda is a dark blue haired lad who stands at 6’1. His slightly-past shoulder length hair is put into two low ponytails for convenience. He radiates a sly aura, and his way of speaking only enhances that. He has a slight accent when he talks, and it easily draws somebody in whenever he does speak. His slanted orange-yellow eyes are similar to those of a cat.

He wears a green suit and a red tie that is a blink of an eye away from falling off. He isn’t very organized and it is very obvious in his dressing.

Small pocket knife.
My phone.
A notebook that I jot notes in…Obviously.
A picture of…Somebody important.
A picture of a blue jay.

That everything always changes. It's just how it changes that's important.