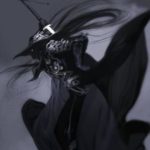 “Beware you all with wicked hearts, lest you bear the butcher mark, his whispers crawl inside your head, his chains will drag you out of bed, he’ll hang you on the butcher’s hooks in the center square for all to look, he watches you from the dark, beware beware the butchers mark.”

Awakened from a great tree in the land of Thistlemere by the Trade Lord Sassy over a year ago, Simon has traveled the world of Hellifyno performing varrious jobs and missions for those with the money to pay. From where he comes from, he does not know. Everything before his awakening is a mystery. What isnt a mystery to him, is a set of skills that come as natural to him as breathing. Cooking, being one, and the other? An innate instinct to kill. Slowly, he has begun to make his name as an assassin for hire. Though, he tends to leave a mess. Simon is not the one you hire when you want a quiet kill that looks like an accident. His targets do not slip quietly in their sleep. Instead, they are left mutilated. Their blood painting the walls of where their final moments took place. Their bodies and the bodies of those that would get in his way torn and ripped apart with The Mark of the Butcher carved into their cadavers.

Recently, he has reemerged. Joining Cpt.John “Firebrand” Wallace as second in command of the KrakenSlayer pirate crew. However, even this has brought with it some issues. Shortly after joining, he came across the Individuals within The Blue Moon Tavern. What was supposed to be a quiet night quickly turning into a violent brawl that wounded his reputation.

A conflict between him and the “Moonchild” Azura. Who attacked first is unclear. However, the conflict was not without casualties. Zvestra was caught in the crossfire and found herself slain as by an attack from Simon that was not meant to be lethal and aimed at Azura. With her blood on his hands, he has been declared an enemy of the Wintersong Comander, Nacht. Though Simon has tried to negotiate with the commander, informing her that what happened was not his fault and an accident, Nacht refuses to believe him and has sent her shadow hounds to hunt him.

Simon now stands at a crossroads. Does he attempt once more to reason with the commander and spare the blood yet left unshed? Or, does he give into his base instinct and declare war on Nacht and her forces? With the odds stacked against him and no alliances to call on Simon The Butcher faces his first real challenge since awakening on this world.

Simon stands at six foot even with porcelain skin and hair as black as night. Grey eyes speak of his true age and his slender but athletic frame speak of his training. Normally dressed in all black with a bandana covering his mouth and nose and a wide brimmed hat that covers his head. A massive Chain Cleaver on his back signifying his brutal lifestyle.

Im not a bad man, just a man that never had the option to be good.