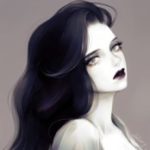 Personality:
She’s usually cold, but playful in a way. She usually wants to avoid swells of intense emotions, but she can’t always avoid them.

– She can Take/Consume souls of any living things, unless other character is not considered alive, or is immune to such things.

– Can communicate with dead people.

– Can control souls she has consumed or captured.

– Can “teleport” due to her ability of controlling souls.

– A pointless, but fun ability, is that she can summon items to her through transportation of souls. She just needs to have been to the certain place before.

– Leading off of the last, she can control emotions, but this takes a lot of restraint to not consume the soul.

– She can hone in on her ability to read minds and memories through channeling in on one’s emotions and/or soul.

– Wherever she goes, a coldness from her will spread around the area, making others feel the coldness and emptiness of her.

– She can make spirits manifest in their human form.

– Can’t feel heat or cold. She can only “feel” if there is a physical thing putting pressure on her.

– She lacks emotional ties/ strong emotions, and usually doesn’t know how to deal with a great influx of them. This does not, however, mean she can’t eventually gain them through forced humanism or through people with some sense of humanity surrounding her.

– Her heart. If stabbed through or ripped out, she will die.

– She can’t eat regular food. Instead, she must consume souls of other people in order to keep existing. If she doesn’t feed, she will slowly deteriorate, and eventually die.

– Though it won’t kill her, if Arabelle is stabbed or injected with blood from a dead priest (or any other holy person), she will grow weak and will become victim to mortal wounds and can fall victim to be overwhelmed by other’s emotions.

Arabelle was once a happy and lively woman. A daughter of an influential and wealthy family in England, she had everything life could give to her.
The beauty of society, the Belle of any ball, Arabelle had a comfortable life ahead of her as she was receiving many suitors and proposals.

Her father was holding a party for a recent and successful business deal; and more than just his associates came. One moment she was dancing, socializing, and having the time of her life.

The next, she was laying on the cold, cobblestone streets without her soul.

It’s been years since that night, since she found herself as a freezing husk of a human.

Since then, she’s made her existence… Comfortable.

She could no longer age, no longer die by usual human causes.

She’s lived many lives, taken on many different names.

A peasant, a priestess to many faiths, a member of numerous royal families, a keeper of many secrets…

But no matter where she went, no matter who she said she was, she was always known as one single thing.

A taker of souls, the disbalancer of Life and Death.  For whoever she touches, whatever living thing that grazes beneath her bare fingers, she consumes, and takes their soul.

A powerful being with no want for it, Arabelle now lives her many years taking on different names, living different lives, and continuing her existence, searching for something that she has yet to indentify in her many, many lives.

A seraphic beauty with paler than death skin, gleaming silver eyes, and blacker than night hair.

Though what she carries with her will usually depend on when and where, she will most certainly always have on a pair of gloves on her hands, a way of preventing her from consuming the soul from anyone she touches, and a veil o hide her less-than-human features from the prying eyes of others.

Too many to name.