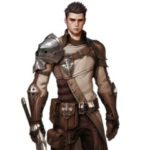 A swordsman seeking his lost honor

Who may catch his fancy? A lady who can turn his eye and perhaps mend his spirit

Petyr knew what he wanted to be from early in his life, he wanted to serve in the king’s guard as his father had. For this Petyr had trained his entire life, learning from his father who had been allowed to retire in peace from the king. In his youth Petyr was always impetuous, seeking to relive the stories that his father, Errold would tell. The stories were of the deeds that he and his fellows had done in service to the king, Fighting off assassins, seeking out battles to stem enemies of the land, and of course living on the blade of a sword. It was this that made him aspire to carry his family’s honor as he rode to join the king’s guard. His father and mother bade him well, though it was with a heavy heart as they knew success would mean his loss from them.

Petyr was driven, though he had many duels with his fellows who saw him as a threat to their own goals. Petyr would not let them dissuade him, even when he was outnumbered and beaten with fist and club. The captain of the guard inquired what had happened but Petyr did not reveal his attackers. The resolve and his skill earned him the respect of his peers. Soon Petyr became part of the guard and rose to be the king’s right hand, his own personal guard. It was his dream and he relished the honor of guarding the king. Many respected him, some envied him, and most of the king’s enemies feared him. He was known as the wall that blocked the king from anyone wishing him harm.

All that changed on the feast of remembrance, the king was visiting the graves of his ancestors, Petyr at his side as always. The attack was sudden, swift and Petyr fought with hard courage, but the odds were overwhelming. The king was assassinated, and Petyr was left alive. Naturally, suspicion fell on him, how could the king’s guard be surprised and why did he survive. The king’s family held him to blame for the death, and he was dishonored and barely escaped execution. He has always questioned it and the startling realization came that he was betrayed by his fellows.

Now he wanders, seeking a new home and to find a way to restore his honor.

Petyr is tall, but lean and muscled spending years honing his skill with a sword. He wears simple light armor that allows for swift movement rather than thick defense. His eyes are a dark blue though not too much to stand out. His steps are quick and have the likeness to a cat ready to move if need be.

The clothes on his back

Only to know me can you know them.

No honor is so lost it cannot be brought back.