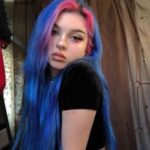 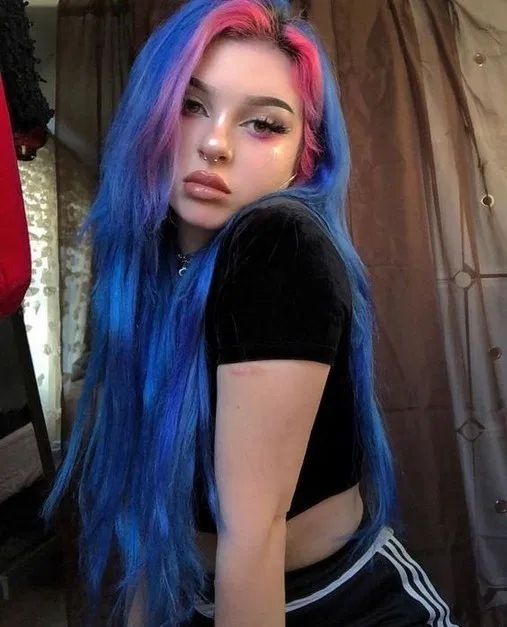 The mother dies. The father becomes cruel. Or already was to start with. Isn’t that how most stories start? Well, Asherah Cascade’s is no different except for a few small details… 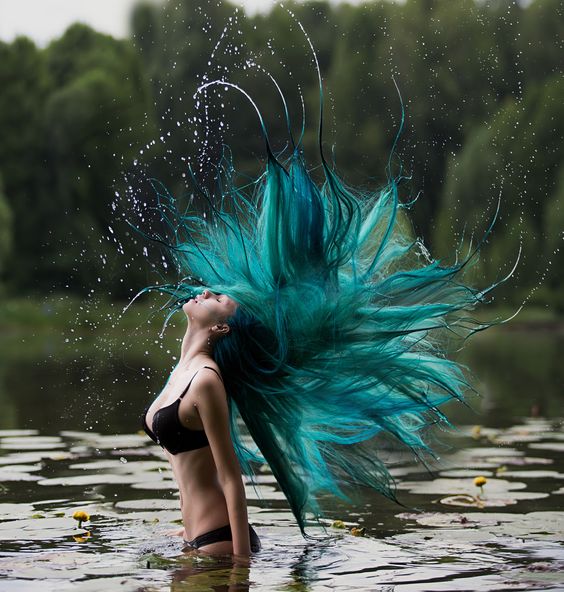 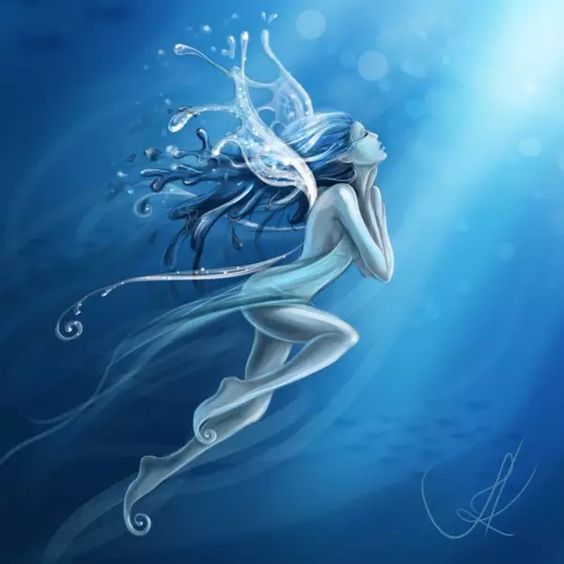 Her mother was an Asrai– small water fairies often mistaken for mermaids or selkies but were otherwise known as the ghosts of the sea due to their translucent bodies, skin so pale it was clear. The tiny creatures were nocturnal, unable to stand the harsh rays of the sun for too long or risk being reduced to nothing more then shimmering puddles of rainbow water and so they dwelt at the very bottom of the sea in homes carved from whale bone.  Reclusive creatures were they and for good reason. Hunted into near extinction for both their immeasurable beauty which was rumored to send those who looked upon them into madness and for the charm magic they possessed. Only breaking the surface once every century to bathe in the moonlight, it was on one of these visits that Asherah’s mother, Sirena, was lured into the clutches of a land dweller. 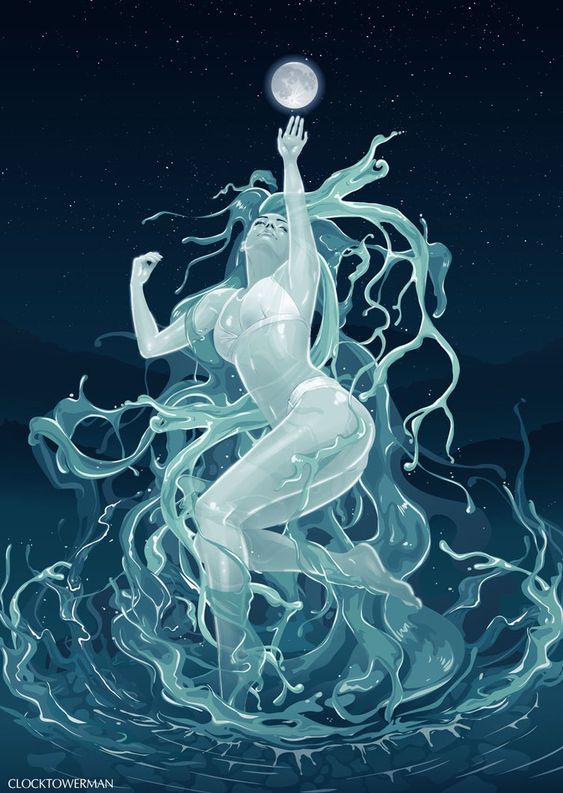 Captured and enslaved, the Asrai was married against her will as is often the case in these stories. Her unhappiness, a life lived by night and restricted to the stone and mortar during the day so she was unable to even end her own misery. And then a small miracle happened, a daughter was born. Named Asherah, she who walks on water. 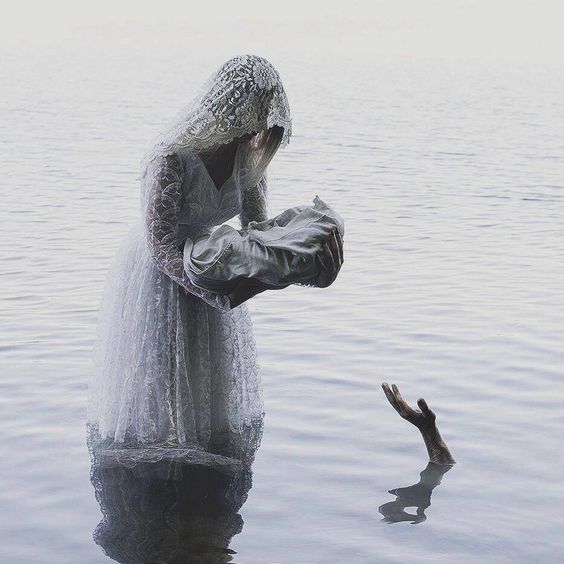 But even the joy her pale haired child brought, fingers laced together by transparent webbing, eyes that whispered of the sea, Sirena was slowly losing her mind, bit by bit. Her absence from the ocean seeming to cause an imbalance in her sanity. Desperate, she escaped one night, dashing all the way to the waves with her child bundled in her arms. She was so close.. so insistent to be reunited with the darkness below that she did not consider the fact that her daughter was cursed with mortal blood. Her first breath of sea water burned her lungs, salt curling on her tongue and the infant squealed and spluttered, flailing in panic, resisting the pull of the waves. On the realization that her child would likely be drowned, Sirena threw herself to the sand, heartbroken. Whether she chose to stay to bask in the sunrise, or whether she simply lost track of time in her despair, one will never know. Weakened as she was in both body and spirit, it took only moments for the woman to melt into a pool of rainbow colored water, a shimmering puddle in which the babe was later found. 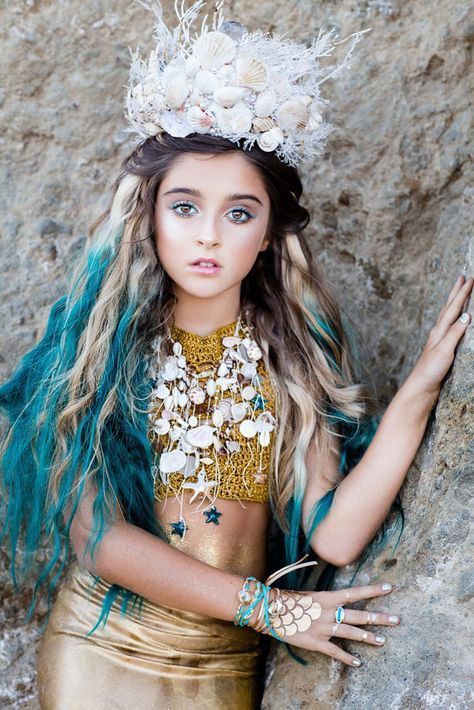 For many years, Asherah lived in the shadow of her mother’s so called crimes against her father, her desertion. She longed for the sea, hours spent staring at miles of blue from her high bedroom window and yet she was never allowed near its gentle rhythm, her deformity hidden beneath gloves that she was instructed to never remove. Over the years, her natural shade of blonde slowly began shifting to turquoise, a sign of her Asrai blood and connection to the water. But it was the discovery of her mother’s journal, hidden beneath a loose floorboard, that opened her eyes to the truth of her origins and Sirena’s descent into madness and death. Secretly, she planned her escape. 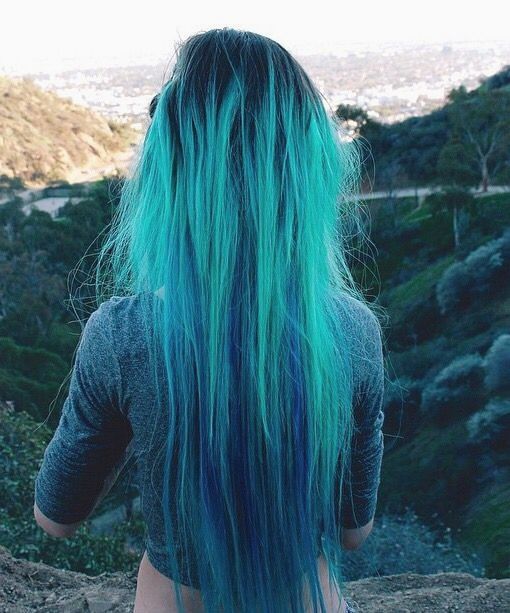 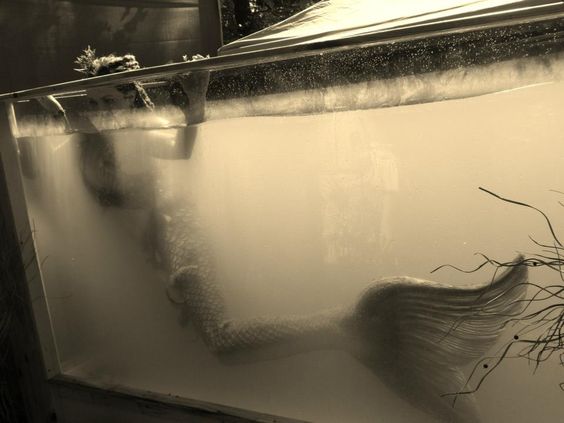 As chance would have it, she did not need to wait long for her lucky day came in the guise of a travelling freak show. He seemed trustworthy at first having noted the girl at one of his shows, those odd gloves and before long, she was being whisked away, escaping her life in favor of one that promised freedom, the chance to play at being something more akin to what raged in her blood. A mermaid. But alas, things were not as one was promised. Asherah was forced into a life of greater suffering then her previous one. Her webbed fingers were displayed for the world to see, something she would not have minded if not for the fact that she was made to hold her breath until she near passed out, trapped in a small cramped tank of glass and murky green depths, legs wedged into tight glittery fabric designed to replica the scaled tail of a mermaid. It was impossible to move, let alone twirl about with soothing grace for crowds of grubby children who beat on the glass with chubby grease smeared fists. Or the long ques of men that came after hours to view her, scantily clad in nothing more then a cheap bra of shells. Unsurprisingly, the woman soon developed a fear of small spaces and ironically, of drowning. But it was those private viewings that weighed on her the most, the rustle of skin and fabric, the shuffle of coin exchanged in darkness and those hungry, leering eyes. Asherah likely thought things could get no worse. But they could, and they did. 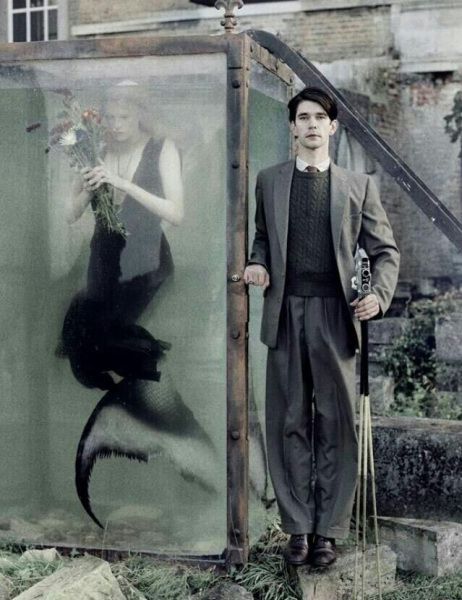 It wasn’t long before her ethereal beauty was noticed by another. A private client, a famous artist who was renowned for his reclusive lifestyle, his eccentric habits, his tendency towards darkness. In Asherah, he saw a muse for his paintings and with the novelty of her act fading, her master was only too happy to accept the exorbitant amount of money that was offered for his prize pet. Inhuman were the conditions the tiny girl was forced to work under, games of manipulation played with her mind as her body was poised into whatever position he required for his latest artwork. Her hair colour stripped back to natural blonde or else dyed to suit his fancies. Her needs were left to wither in favor of those bouts of madness he suffered when he would force her to lie still, decorated with pearls, shells and sea glass whilst he obsessively put brush to paper for hours, and hours. Feverish in his intensity. Her life was dark, filled with shadow and confusion until she was rescued from the man’s grasp by Archibald, like he had done for many others. 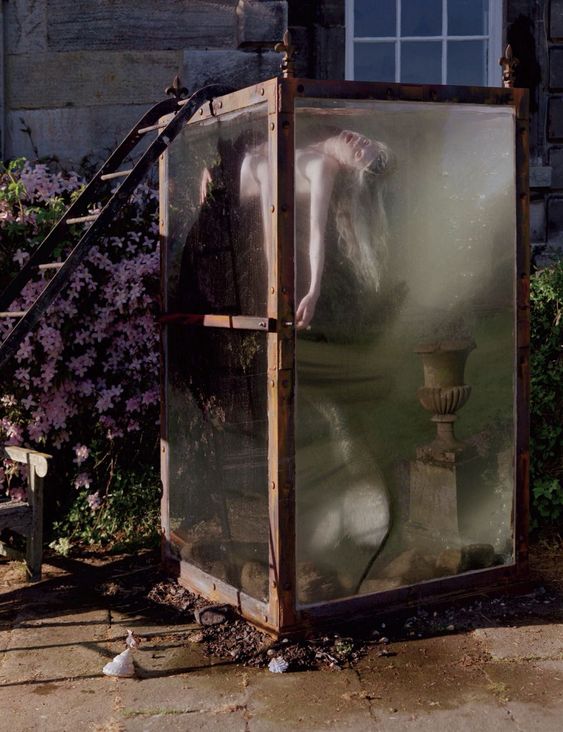 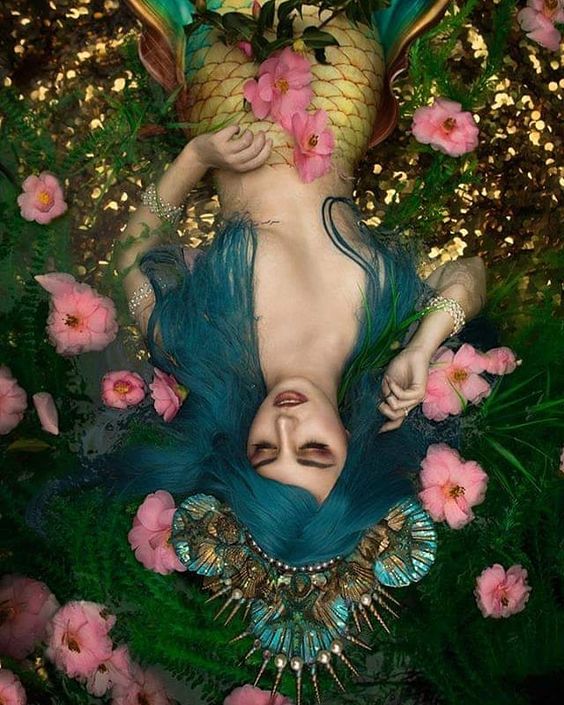 It was in the Cirque Du Lumiere that she found her true home and family and though she still dons the glittery tail regularly to astound the masses, she is allowed the freedom to express herself, and of course, a much bigger tank.  Ashera often duets in tandem with her closest friend and performance partner, Jasper. Whilst the two are, in many ways, polar opposites in personality, they often function in perfect harmony and balance to each other for they even out each other’s faults. 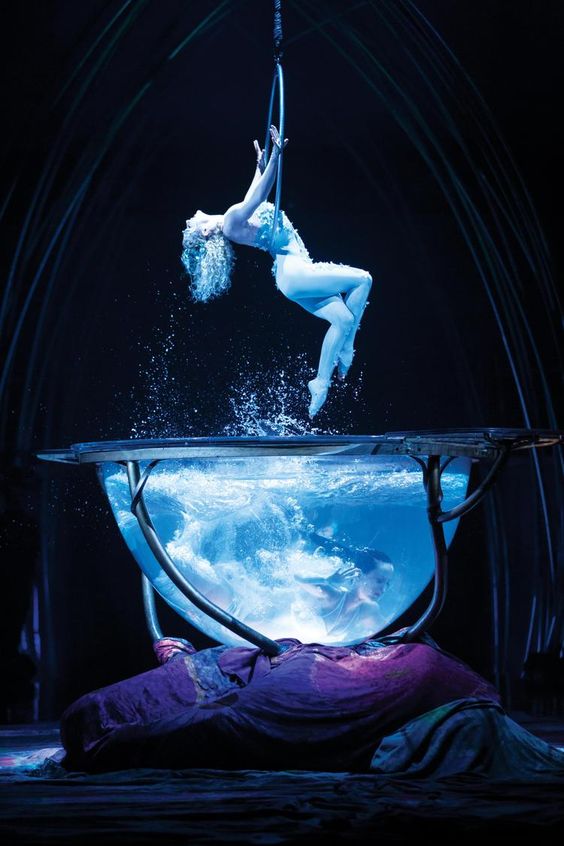 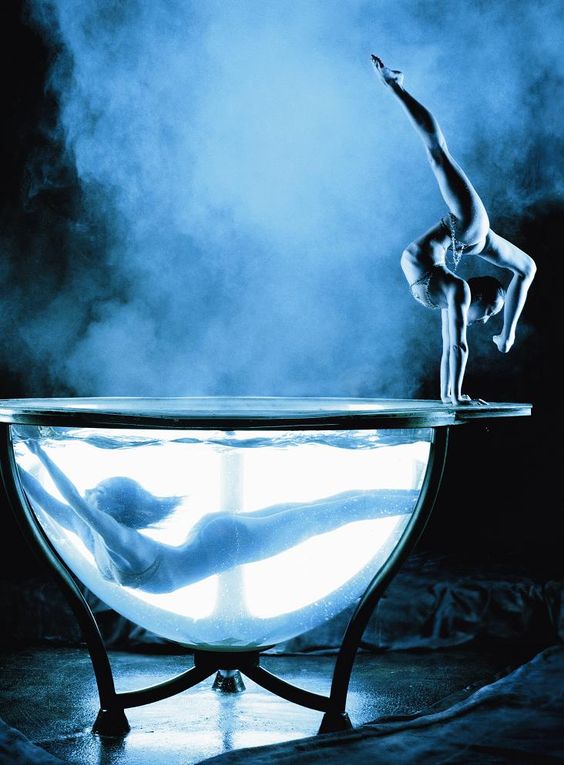 Asherah is tiny firecracker, constantly filled with energy. Personality wise, she is quite charming, friendly, affectionate and open to new people and experiences though much of this is just a mask she presents to the world, using humor and charm to keep people at bay and prevent them from delving behind the surface layer she presents to the world.

Whilst it takes a great deal to get under her skin, she has a fiery temper when stoked and is fiercely protective of those she cares about, especially the shy and reserved Jasper. Whilst she may appear fearless to most, she has an ironic phobia of drowning and is severely claustrophobic.

Due to her Asrai blood, Asherah cannot tolerate the rays of harsh sunlight for prolonged periods of time as she becomes inflicted with both physical and mental side effects in varying forms. The longer she is exposed to the light of day, the more severe her symptoms become.

Though she presents a tough exterior to the world, Asherah can be easily hurt and craves activity and people in order to alleviate the intense loneliness she often feels. She tries to surround herself with as much noise and distraction as possible for her darkest moments come in the wake of silence when she can no longer avoid the scars from her past. 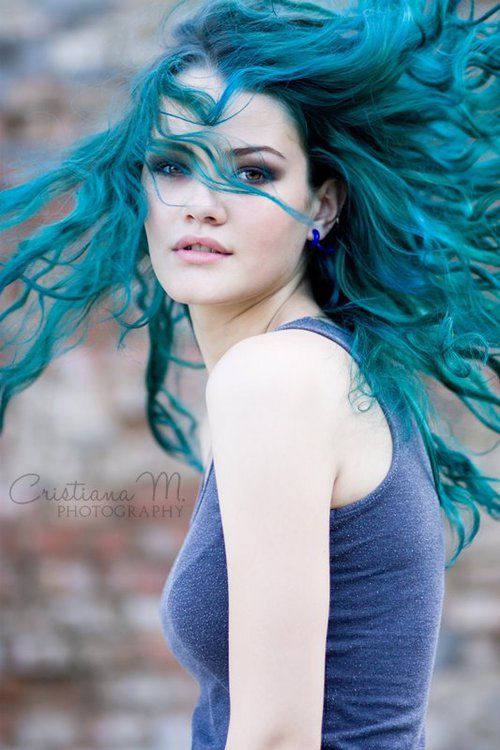 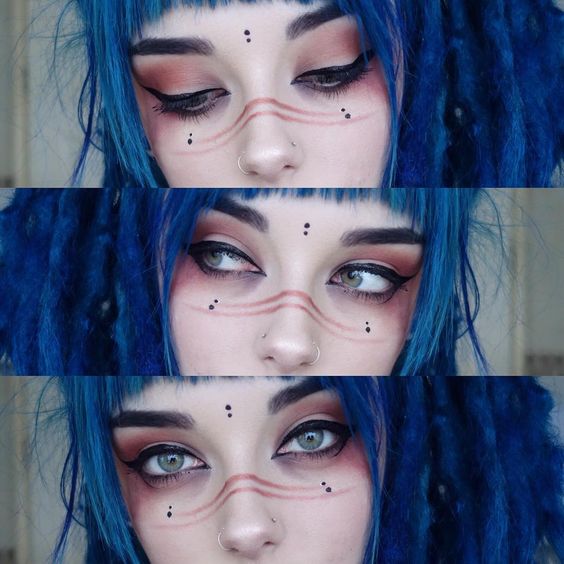 Eyes: A mixture of blue and green, the intensity of which changes with her mood.
Hair: Born with pale hair, Asherah often keeps her long tresses dyed in different shades of blue though she is known to change it up every now and then, if her act calls for it or she feels the whim.
Height:  With her Asrai blood, Asherah is quite tiny and stands about 4’8.
Piercings: Nose ring, Navel piercing. 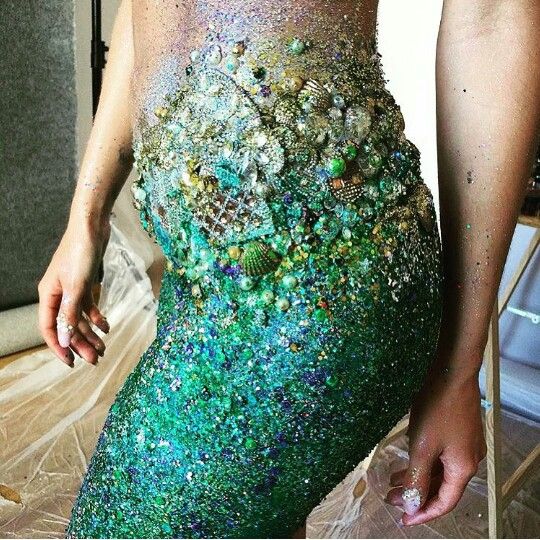 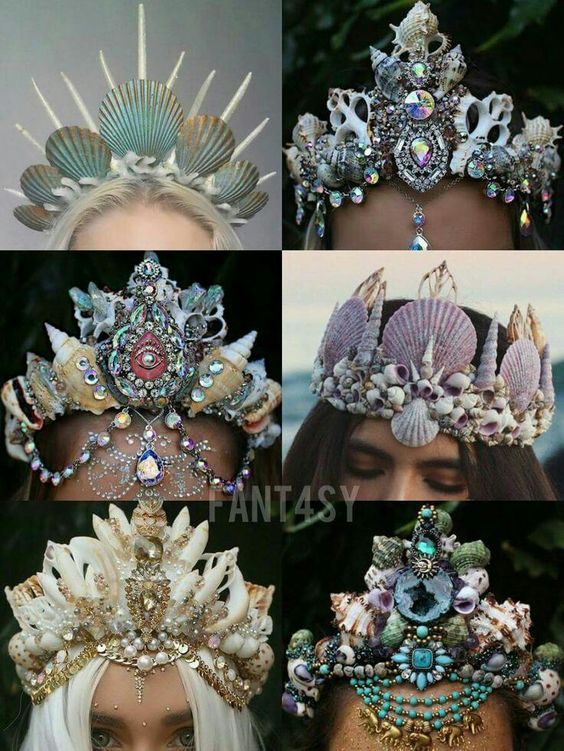 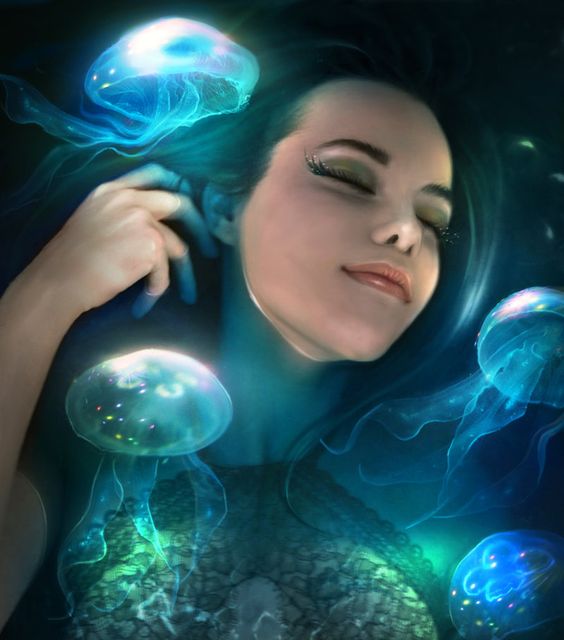