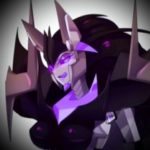 I.O.N. was born as the daughter to Megatron and an unnamed female Autobot. When she was birthed she was a mostly normal Cybertronian, born on the Nemesis. As she grew she was experimented on, being the only AutoCon to have been born that any had known about. Trained and modified to be as ‘perfect’ as possible, to shift into both animal forms and vehicles (cars, aircrafts, etc.). Through these procedures and trainings she became anything but perfect, her mix of sparks often struggling to remain whole, the halves splitting apart when stressed and giving her a mixed and bizarre appearance.While this ‘glitch’ is blamed on her mixed halves it doesn’t help that she is constantly thrown into stressful situations and has gone through many years of hard training and had to sit through painful experiments and add-on’s to her body.