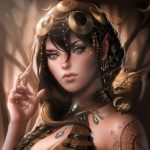 Ava is an elf/witch place in a steampunk base era, but this is subject to change at any given point in time mainly based on where and when a person would like the RP to be based. Ava, as stated before, is a part elf and part elf witch. So her powers are based around those two things.

Her powers consist of shapeshifting (But are limited to persons only), being able to cast just about any spell that she can think of. Her spell casting skills going as far as lighting, fire, space, water, mental, matter etc. Also with her being an elf she is very in tune with nature and can even speak with animals.

I do have a few “rules” I guess you could call them. I don’t Godmode, so it would be great if RPing with me that you don’t as well. Please don’t kill my character unless I have stated otherwise. My RPs tend to float around 18+ based but I’m fine if you want something more pg, (Not everyone is a fan of rated R I understand). I am a paragraph RPer, well if I’m not having writer’s block, so I naturally prefer paragraph based RP but it’s okay if one 1-2 lines are given, I just need enough detail to work with.

Also, it does sometimes take me a while to reply back. This is only because I can get very busy out of nowhere, but I also do my best to try and reply back as regular as I can. I don’t like to keep people waiting…it makes me feel bad.

“A princess never kisses and tells.”