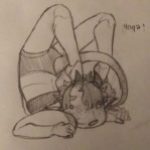 Dont message me if youre 18+, thanks.

Andi was once an angel, however he wrongly accused someone else is doing something very very wrong (the penalty would have been death for this person) and because of this he was sent to hell. And as punishment he has to service other demons in any means necessary.

Polaroid’s
Fidget toys
Soft fabric (to calm him down)

While he wants a very strong emotional relationship with somebody, he doesn’t know how to do it because he’s never had one or wanted to have one. He gets emotionally attached very easily which ends up hurting him later in most situations.