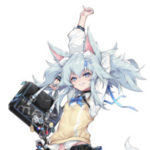 Occupation: Freelancer, she does anything she can do that gets her payed.

Personality: Lyalla is an energetic girl with a sassy attitude and confidence to her actions. Though she gets flustered easily when flirted with, she tries not to show it, and will avoid acknowledging her flustered state. She hates being embarrassed. She’s good at cheering others on and is an optimistic personality, and she doesn’t hesitate to get aggressive if need be.

Abilities: Highly trained in many forms of combat. Due to genetic and technological enhancements Lyalla is much stronger, faster, more durable, and has a very quick reaction time. In addition, she is quick-witted, often able to outsmart enemies even if she cannot overpower them. She has a natural healing factor that makes her regenerate from damage quickly. In addition, she has the ability to turn into a wolf due to her nature as an Okamimimi. Because she is Raiju-Descendent, she also has the ability to create and manipulate lightning and electricity at will, to currently untested levels. While purely theoretical, she is also possibly capable of harnessing her bloodline to turn into a Raiju for a short time, which would likely amplify all of her abilities to unknown levels. With help from her advanced technology, she can also teleport her entire armory to her at will, whether it be all at once or one item at a time is up to her.

Weaknesses: Lyalla refuses to fight with good people, and would rather give up than fight somebody good-aligned (in her own views), even if it meant her death, unless properly reasoned with. Also, if you can damage her faster than she can regenerate… well, you know how that would go.

Immunities: Lyalla takes very little to no damage from any and all electricity-based attacks.

Born on a starship only to be genetically enhanced and trained from an early age to be a powerful soldier, Lyalla Staticfur was basically your average super soldier most her young life. However, one day, the army that was using her was entirely obliterated by an unknown threat, leaving her to die floating in space.

Luckily, she was saved and taken in by a bounty hunter, who raised her properly and taught her more about the world outside of war. She soon developed more of her own personality, as well as discovered her ancestry involving the Raiju, and eventually became an independent Freelancing Warrior who travels the universe, and recently multiverse, doing what she can for money.

Her hair goes down to her back and is usually messy, sometimes if she feels like it she’ll put her hair in pigtails but she usually doesn’t find it worth the effort. Her outfits are generally rather casual, often consisting of t-shirts, sweaters, hoodies, sweatpants, and tennis shoes or slippers.

Lyalla has gathered a multitude of weapons, tools, and vehicles of many types, all easily accessible at almost any time through use of her technology-based teleportation systems.

I wanna do good things! And I wanna have fun as well!