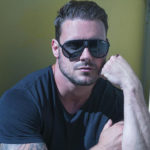 Azazel, has been around since the beginning of time and had seen much in his time from the time there was nothing but grass and trees, to the rise of humanity itself.

He would often think back in those times when human’s were so young and innocent and known nothing of the world around them compared to now and Azazel always wondered how they managed to always survive no matter what was thrown at them. Azazel, thought back to when he first walked amongst the first ever human beings as they were simple people back than only has one purpose to survive the day whichever way they knew how to. No bigger than simple farmers spending their every waking hours just to support their families, and village with simple food from one day to the next. Human’s back than were pure and true to the beliefs and never swayed from them unlike today’s world of corruption and darkness that surrounds them everywhere they turn. There was a time when when the world knew peace and harmony before war, and greed as well people lust for power ever came into play. These were the simpler times and was times he often missed.

It wasn’t til the Egyptian Era, that my services came into full effect. I mean there was that one time of death but that hasn’t been since Cain and Abel but that was nothing compared to these times. The mortal world began worshiping gods and pharaoh’s and that when things really gotten interesting. It was the first time that mankind experienced darkness of one’s ambitions. Mortals declaring themselves as gods to the lesser beings that were unfortunate to be born as slaves, and mankind began to lose their way ever since.

I watched on as these innocent human beings that would never hurt a fly, began killing and torturing and sacrificing all in the name of their gods, but even I know it was not in the name of any gods but in the seer pleasure of that person cruel ambitions, and just used the gods to justify their own means of taking pleasure in the misery of others simply because they believe it was just. We as horseman’s live by one law and that is to not interfere in the means of mankind, no matter what happens as we simply carry out what needs to be done at any cost. We were put here for one sole purpose, and that was to maintain the balance and make sure nothing tilts it and if that means at some point of time destroying an entire civilization than so be it as it is not the first time and it won’t be the last.

I have walked through every generation of mankind’s existence, and I have come by many different names throughout history as I have been known as The Pale Rider,The Silent One, Angel of Death, Architect of the Eternal Conflict,The Guardian,The Reaper to name a few. But nevertheless my purpose always remained the same, and it will always be so til the end of time. From the first civilization, to the very last being walking this earth. I will exist until there is nothing left, and when there is nothing left only then will I find eternal peace until this world is made anew.

I am the horseman death and where I go hell soon follows!!!