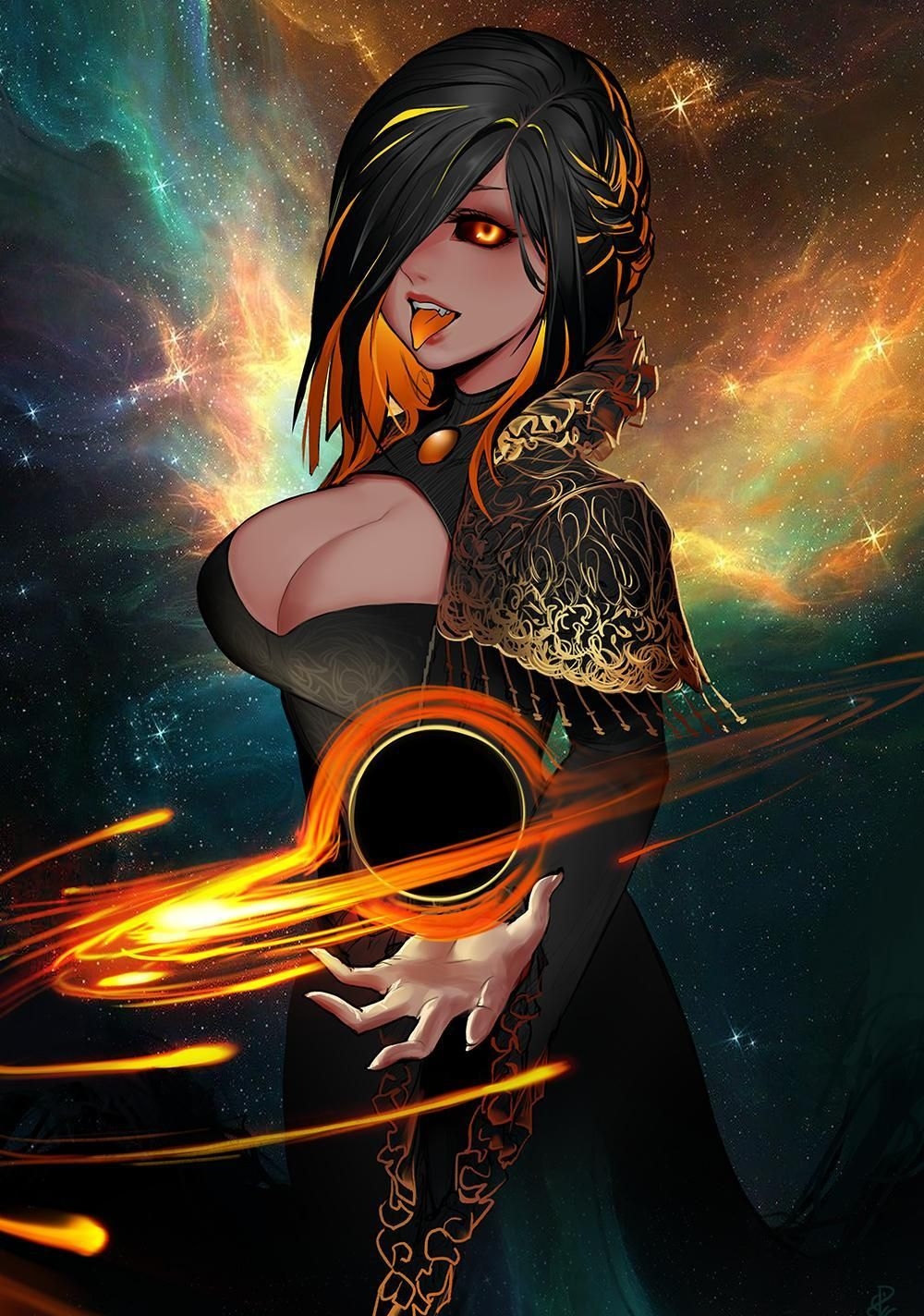 Minerva and her family were apart of a group of Saiyans sold into slavery by one of Frieza’s generals who figured that no one would miss a few monkeys, fattening his pockets. Shipped to a slave planet in the Dark Quadrant, a section of space filled with dying suns, and occupied by races who took advantage of those star’s death cycles by mining rare minerals and forms of energy that only ever came into existence near the end of a star’s life. These minerals and energies, however, were poisonous to most life forms in their raw states so they used slaves to gather it. Saiyans, because of their physical nature to adapt and evolve quickly, were the most prized slaves in the Dark Quadrant. The elder Saiyans in Minerva’s group survived for a good while, but the harsh conditions of the Slave planet, and the poisonous resources they were charged with gathering grew too much for even their Saiyan physiology to handle. However, the younger Saiyans, especially Minerva began to take to those harsh conditions as a true Saiyan would. Many times they were brought close to death, only to recover and become stronger for it. Their caretakers, while pleased, grossly underestimated the Saiyans.

With only four of them left, their caretakers began to push the Saiyans further, and further, moving them from planet to planet as they mined each one dry of it’s energies and resources. Eventually, however, they came to a planet that was different from the others. The conditions were much more harsh, the earth far more dense and harder to mine, as if it were holding something back. Greedy for these rare resources, their caretakers pushed the Saiyans even harder than before, but while they were physically evolved to the point of being able to handle even this planet’s atmosphere, Minerva and her companions had been driven near mad. This time their caretakers pushed them too far, and triggered a reaction in them that caused them to lose control of their power and they began to destroy the planet. The decades of working in the Dark Quadrant had infused their chi and life energy with not only the power, but the poisons of the resources they had been forced to mine for so long. Not willing to lose their riches, the caretakers tried to stop the Saiyans and their rampage, but were destroyed in the process. The Saiyans raged until finally they broke the planet and released what had been held inside. 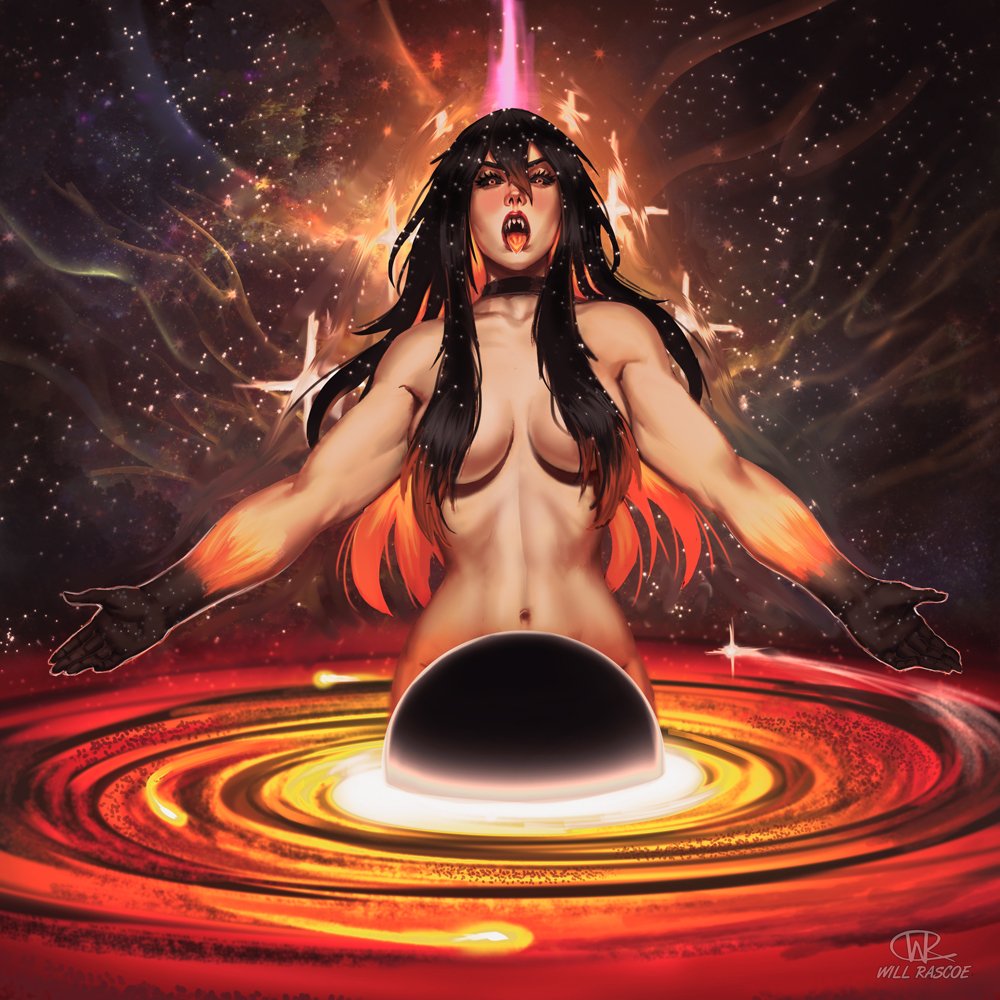 The section of space they had slaved away in for long hadn’t always been known as the Dark Quadrant. It had once been like any regular part of the universe, thriving and full of life, but all things must come to an end, and at the end of this galaxy’s life, the God who had once ruled over it would awaken to devour the galaxy’s dying flair and with that power, create it anew. That was why this last planet had been different from the others, for it had been the prison, the sleeping place of that God, the Goddess Regalia. However, the Saiyans had freed her prematurely, and the cycle of the Dark Quadrant and it’s death was sent askew. This enraged her, but her rage was met with the madness of the four Saiyans, a madness so strong that it calmed her because it was unlike anything she’d ever seen. The cycle must continue, however, and so Regalia played a game with the Mad Saiyans, pitting them against one another to see who was the strongest. In the end, only Minerva survived, having destroyed her former comrades, no longer able to recognize them. Delighted with this outcome, Regalia took Minerva beneath her wing, training her, honing her wild power, teaching her to control her madness, as well as taking her as a lover.

When there was nothing left for her to teach Minerva, Regalia charged her with one last task. Defeating her. They fought for days, which turned into months, and finally, Minerva was able to defeat her teacher and Goddess, though she knew that because of her premature awakening, she was in a weakened state. Her final words before returning to her sleep was for Minerva to go out into the universe, become even stronger, and return here when she finally awakened again to re-create this galaxy and become hers once more. Laying her to rest within that dark planet once more, Minerva cast out of the Dark Quadrant and into the other galaxies to do as she bid, and get stronger. Starting with the general of Frieza who had sold he and his kind into slavery in the first place. Taking her revenge, and destroying the star system that the general was in charge of, as well as he and all of his forces, Minerva began to travel deeper into space. 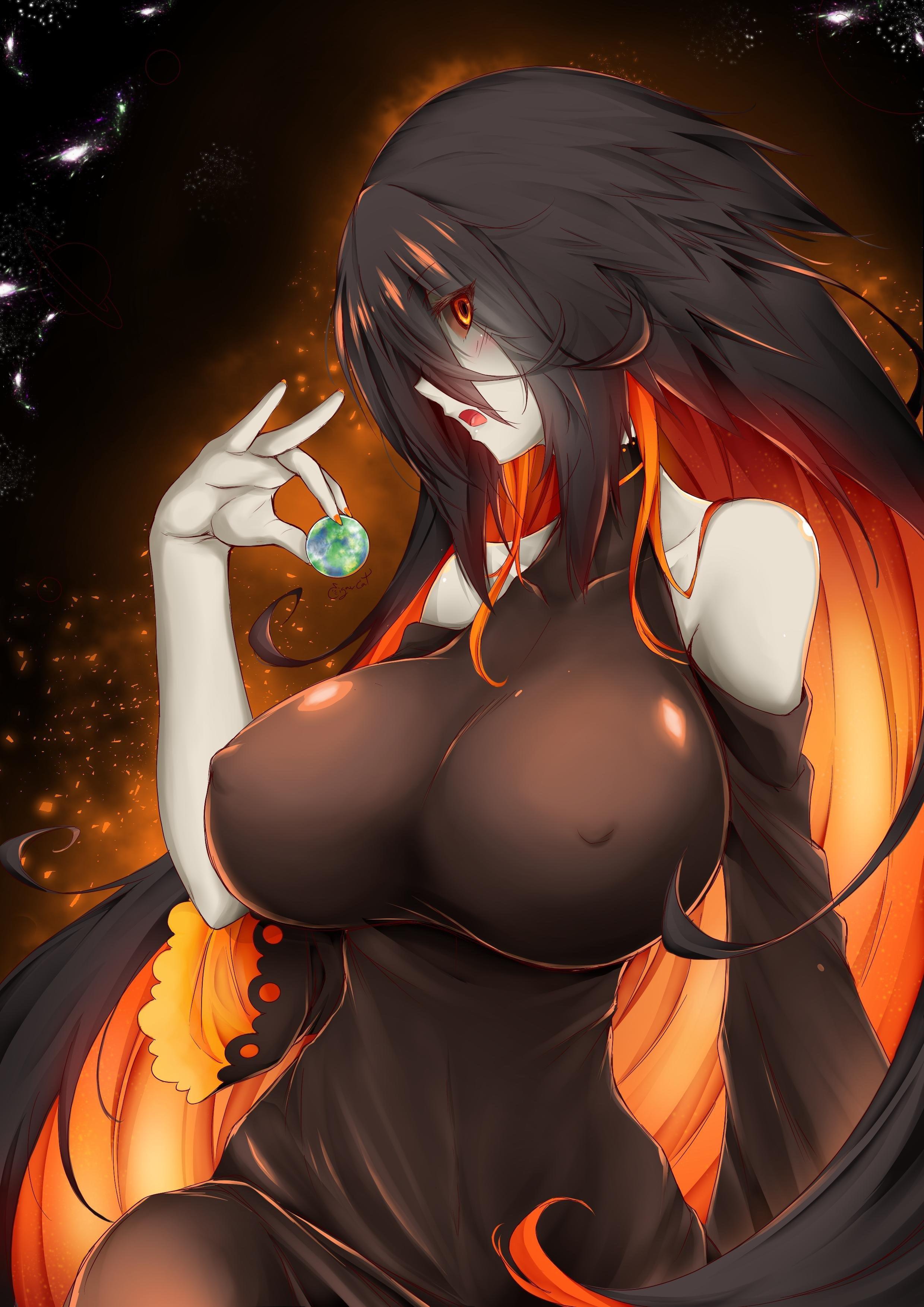 She met many challenges, and grew stronger and stronger until finally she felt a familiar call from the Dark Quadrant. She didn’t know how long she’d traveled the universe, having long ago lost track of the flow of time, but she could feel the pull from Regalia, and knew the goddess was truly awakening. Minerva returned to where Regalia had been sleeping, but when she got there, she didn’t see her goddess. Instead there was a pitch black egg where the goddess had once been. It was the egg that called out to her, and when Minerva touched it, a rush of power and information blasted into her. While in contact with the egg, it showed her the truth of the Dark Sector, and why it seemed so strange. It was a foreign stretch of space within a universe it did not originate from. The egg Minerva held was the original form of the Dark Sector, and that section of space had been grown around it. It wasn’t just an egg, but a seed that had been planted there in order to absorb the primordial energies of that universe. Even the controllers of this universe had not known it’s true form.

The primordial energies the egg had absorbed over the course of so many Millenia was enough to fuel its own universe. Minerva also found that Regalia herself was not a true goddess of this universe, but a physical construct meant to protect the egg. However, the time for the egg to awaken had come close, and so Regalia had chosen Minerva as the egg’s new protector, charging her with taking it away and returning it to it’s home realm. Minerva could feel the power of the egg as it sang out to her. She had become tired of this universe anyway. She had gotten her revenge, and with the rest of the universe focused on some multi-dimensional tournament of power, Minerva decided to take her leave. Taking the egg, The Mad Saiyan Minerva took her leave of her home multiverse and returned the egg to its own place of origin. She was met by a group of beings she had never thought she’d ever meet. Each one of them was far more powerful than she, so much so that even though her blood boiled with the lust for battle, her instincts were too strong and held her back. She needn’t have worried, however, because the leader of these beings, calling himself Yjarl, the father of the abyss, explained to Minerva that it was not she who brought the egg home, but the egg that had brought HER home. He had sent many such eggs out into different multiverses in hopes of attracting beings who held powers and abilities that Yjarl wanted to collect. Minvera had met all of these requirements, and thus the egg had brought her here. 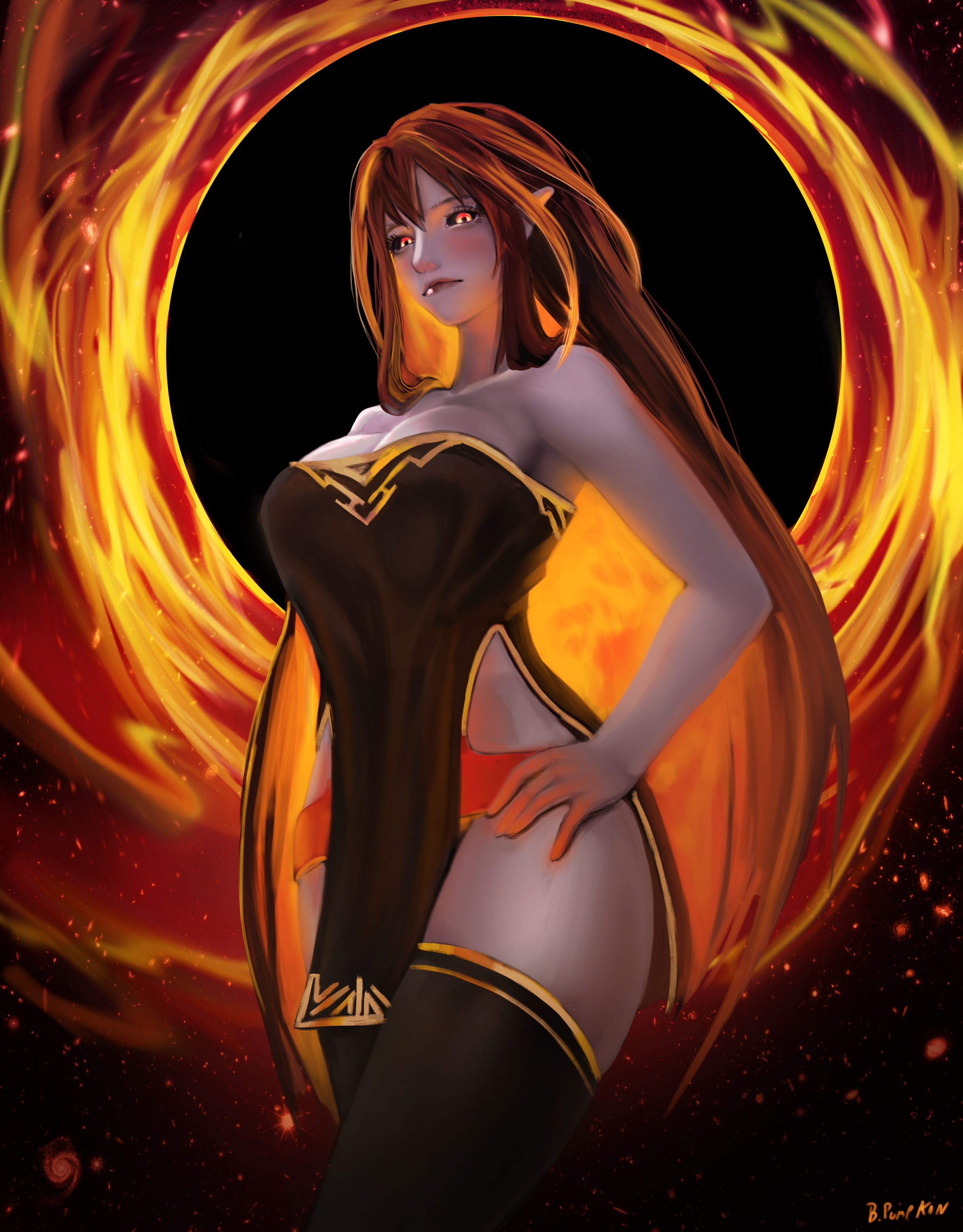 Yjarl offered Minvera a place in his family, even explaining his origins as one of this universe’s primordial controllers, and how his ‘children’ helped him with his ambitions throughout the different multiverses. Minerva did not hesitate in accepting Yjarl’s offer. Looking at these beings, his children he called them, she knew that a mad Saiyan such as herself had found home. The moment she accepted, the egg she held glowed with a dark light, which spread out and engulfed her, forming a black shell around her. She cultivated within this larger egg for what seemed to be centuries, and when she broke free from that black shell, she was changed. She was still a Saiyan, but the energies she cultivated had fundamentally changed. No longer did she cultivate normal Ki, or even God Ki, which allowed her kind to take a form able to compete against the gods themselves. Instead she now cultivated a dark, abyssal ki that was the origin of the universe. It’s potential, and applications were endless, and Minerva was overjoyed to be able to push this new power to its limits and then break those limits and push beyond them as her kind were known to do. Accepting, and being accepted by her new family, Minerva had finally found her place, a path with no end that would allow her to grow stronger and stronger, forever. 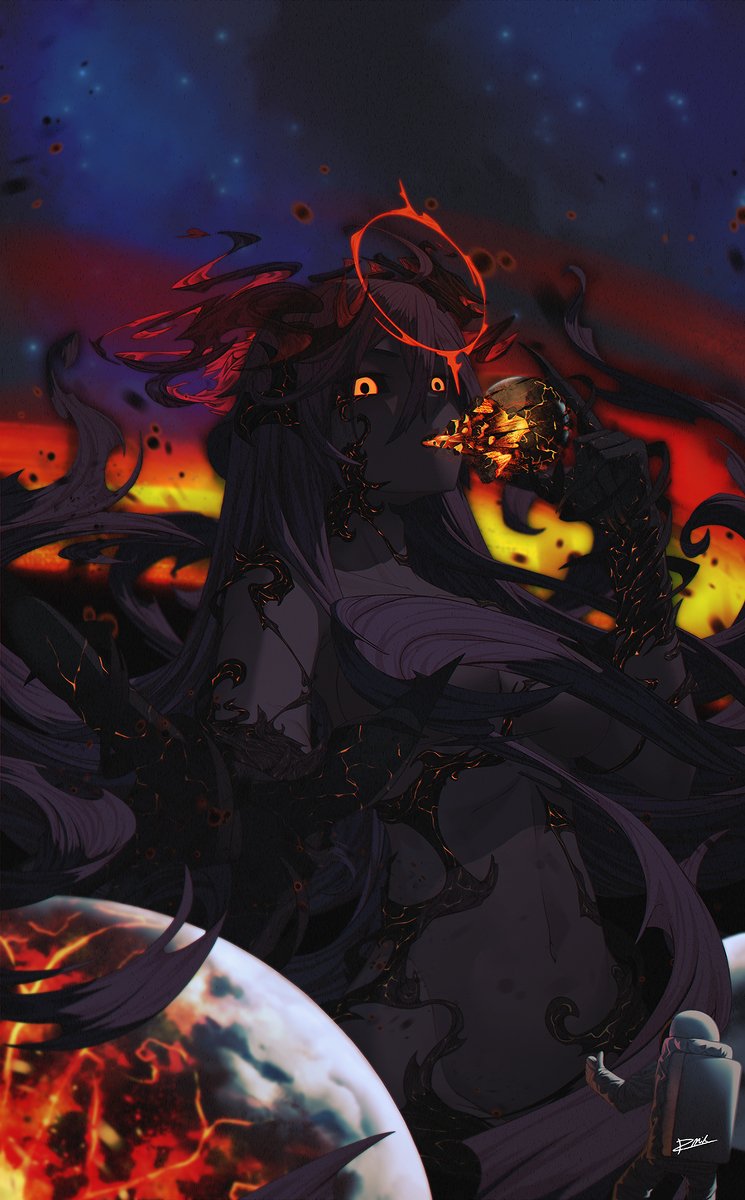 Saiyan Of The Abyssal Black Sun