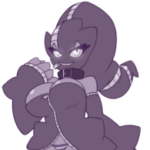 “I will find you William.. and when I do.. you best hope that the others find you before I do.. cause if I find you.. I will make your Death not a pleasant one..I.. ALWAYS..COME.. BACK”

None..I have no more love in my dead heart..

D.. don't ask me that!! I can't remember them!! M-mommy please help me mommy!! *She cries softly*

Amanda was once a loving and caring little girl who had a lot of friends and a loving family and siblings she loved Fredbear’s family diner since she went there always for her birthday..one day while at her 7th birthday party Spring Bonnie came to her and told her about a special surprise cake just for her her parents didn’t see this so she followed him to a spare room out of sight of the other customers.. but she realized something was wrong.. and before she knew it she was raped violently and stabbed by William Afton who left her to die in a springlock suit where she laid there.. for 30 years until she was found by several employees who used her as a prop in Fazbear’s fright unaware a corpse was in it.. during her time she became a banette and was trapped in the suit for years until the fire.. she got out but was heavily damaged and so she scavenged for parts finding old Endoskeletons and a burnt ash covered Fazbear’s mask and replaced her rotten spring Bonnie mask her corpse was heavily burnt and damage by a gas pipe explosion today she is still active.. looking for William Afton..so she can exact her revenge on him for what he did to her.

She was a black skinned young girl who wore a yellow and Pink outfit she always carried a chica plush with her. 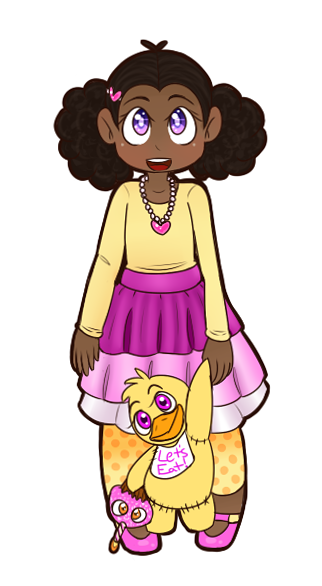 After her Death she became a 5’7 ft tall female banette possessing a plethora of zippers running across her body and a more busty figure. 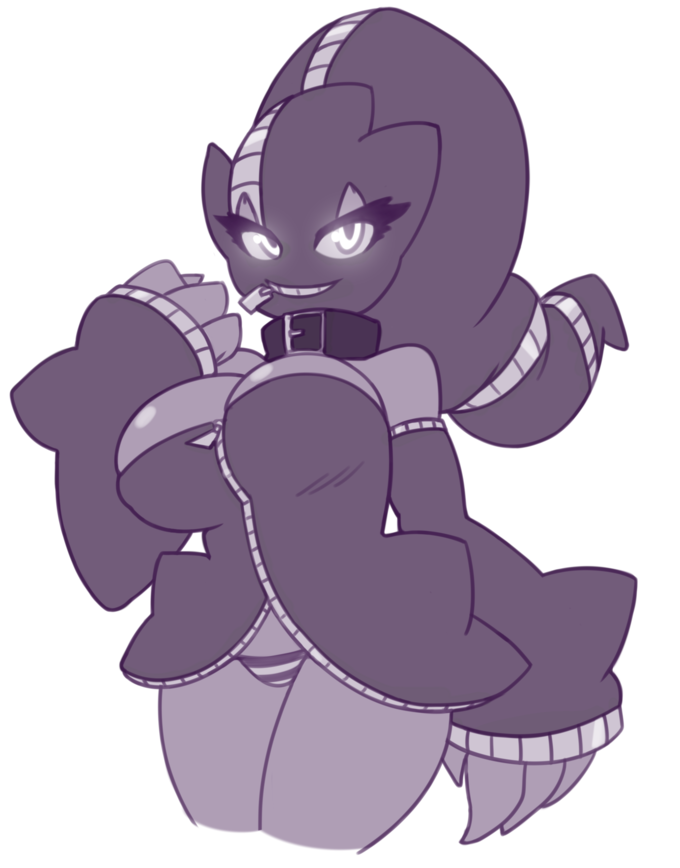 After she reanimated she became a abomination of rotten flesh and rusted Metal parts still alive somehow she became more active.

Creation is a mangled mix of Ignited Freddy, Ignited Bonnie, Ignited Chica, and Ignited Foxy.  As such, it has many of its features. Creation’s upper head belongs to Ignited Freddy, now lacking both ears, with wires coming out of where they used to be. The lower jaw is Ignited Bonnie’s. Both suit parts are now a dull grayish-blue. The animatronic’s torso and limbs are exposed endoskeleton parts, covered in wires, similar to the Fallen. It is noted that the bow tie belongs to Ignited Bonnie, but for the torso, it is unknown, but could still be Ignited Bonnie’s since the bow tie is already on the torso. Creation has four arms. The first set is Ignited Foxy’s. A lower set, located under the first belong to Ignited Freddy, as Ignited Chica completely lacks forearms while Ignited Freddy doesn’t. Like Nightmare Mangle from Five Nights at Freddy’s 4: Halloween Edition, Creation has three legs. Two of these are Ignited Chica’s, indicated by the suit feet they have. A third leg is completely bare and extends from behind. The animatronic who owns this leg is most likely to be Ignited Foxy. However, the foot doesn’t belong to Ignited Bonnie, because that Foxy’s foot is wide open, Bonnie’s is closed, and the third foot shown in the picture is open. Creation’s eyes are black, with bright red pupils which are presumably Ignited Bonnie’s

Old pins in her body body
Spare needle and thread for emergencies
A bear plush
Photos of the victims who deserved to die horribly by her hand.

In life her name was Amanda clover

In that nothing matters..NOthiNg at All..