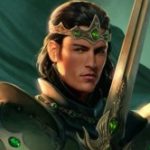 Bayon was born a prince. Eldest of four Brothers and Two Sisters he grew up in the lap of luxury being groomed to be the future King. Where he was born age did not determine the future king like most, but instead the king was the welder of an ancient power known as Haki that is passed on genetically through the royal line. Bayon displayed this power at an early age much to the delight of his father, but he never really wanted the throne. He wanted to travel, see the world, and lean answers to whatever questions came to his mind. Because of this he was elated when the youngest brother, Gideon, also began to display the power and soon grew to a strong contender for the throne.

Once their father passed it was time that one of the brothers had to be chosen. In order to decide this a duel between the two was decided upon and in the great coliseum they faced off. Three days and nights the brothers fought to a standstill until the dawning of the fourth day Bayon realized that the Kingdom would be better off in his brothers hands and knelt before him ending the duel. By law, due to the nature of Haki drawing others to follow the user ultimately leading to rebellion , the winner would become king, but the loser would be exiled never to return.

The next Day Bayon was led from the Palace and out of the city gates in what seemed more like a parade than a banishment and at the gates he shared one last tearful goodbye with his siblings before heading out.

It has been five years since then and has he suspected his Brother has thrived as king and he has thrived exploring. He still writes letters to let his siblings know what he’s up to and occasionally sends gifts from various places in the world although it is rare for him to receive anything since he rarely stays in one place for more than a few days.

He is in his early thirties with dark hair that he wears long with a clean shaven face. He is an imposing man standing just under Six foot five and built like a warrior.

He mainly travels light and just carries his Sword on him and a bag of basic supplies.

His main weapon though is his ability to use Haki

In simple terms, Haki is an ability to sense and predict spiritual energy, use life force as physical reinforcement, and, overpower enemies’ willpower with your own.

There are 3 main abilities to it:

1. Color of Observation – This allows the user to sense others around him even if hidden or trying to conceal themselves. This also help evade incoming attacks as he can sense what is coming before he would using just his sight or hearing

2. Color of Armament – This allows the user to to use their spirit to create, in essence, an invisible armor around themselves, providing potentially incredible offensive and defensive capabilities. This ability also extends to weapons and objects being held by the user and can strengthen the bladed of his sword.

3. Color of the Conqueror – This is arguably the most powerful ability of a Haki user and allows them to exert their willpower over others. This usually knocks out those with weak wills and stuns or disorients those with stronger wills. It also allows the user to tame animals by exerting their will upon it.