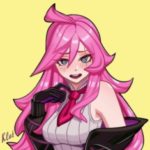 “Laws are set in place by pussies afraid people like me will rule the world.” -Bellona Mars after being apprehended in Zürich, Switzerland, 1944

"I am, a broken, feeble woman. Yet i can slit your throat faster than you can say 'pussy'."

"Romantic interests? Erm… Well, i want a guy who is as scarred, and battle broken as I am. He's gotta be good in bed too."

"As of now, I am in romantic cohoots with noone of particular, though there was a very good looking man in my bed this morning. I have no clue how, nor when, he arrived there however."

The following information is provided by Serene Flynn, who works with Bellona in the organization GFH, but due to a high intoxication, and the strong scent of weed on the woman, we aren’t entirely sure if it’s accountable to miss Mars’ information sheet.

“So, lemme get this straight, you’re giving me, a thousand bucks, to spill the tea on my best friend? Naw boo, make it two thousand, and I’ll even give you here body count!

“Alright, so I shall start with when i first met the crazy bitch. It was august, uh… 1972? I think. I’d just gotten out of a crazy guy’s house, trying to get that ganja ya know? So, I’m walking down the street, walking, hummin’ and puffin’ when outta nowhere this pink blur slams into me! My kush flies out of my hands, I tumble my ass to the pavement, and look up, and lo’ an’ behold, there she is!

“She was wearing a pink and black wolf mask, and had on these tight leather pants, (which made her butt look ggggg-reat! By the way.) A white, button up shirt, and had long ass pink hair that brushed her heels. And she was standing over me, panting like crazy.

“Honestly, i thought i was gonna die. Like, i even pissed myself a bit like, honestly. But anways. So, im staring up at her, she’s staring down at me, and then she reaches down, and helps me up. ‘you okay?’ she asked, but like, her accent was, and still is, so thick, it came out like, ‘ye ooh- kay?’

“I kinda just nodded, shaking a bit where i stood, and like, she kinda watched me for a minute, before picking up my kush. She goes, ‘whazz diz?’ and i go, ‘thats that good good. You want some?’ and like, i got her sooooooo high! Was amazing. But anyways. Ever since then we’ve been friends.

“Like, yeah, bitch has a huge, crazy temper. Yeah, when she kills, she takes it way to far. (I once watched her shove a mans intestinal track through one eyesocket, and pull it out of his mouth. I puked for a few weeks after that.) But she hella loyal. Just don’t insult her hair, she loves pink.

Promptly after providing this information, Serene Flynn was claimed missing, and still has not been found. Details remain disclosed. The rest of what is known of miss Mars, is taken from early accounts of hospital, police, and government records, dating back to the night where it all began, July 19, 1941.

A small baby, with a head of full brown hair, weighing at three pounds, and only nine inches in length, from the start Bellona was small. Her mother, who is actually unknown, (a ghost if you will), left the hospital in an abrupt whirlwind of grey skirts, after giving birth to the girl in the backseat of an ambulance, her only instructions being, “name her Bellona Mars,” before being driven off into the night.

And so, as she spoke, as it was. Bellona was cared for in the hospital until she was a year old, and then was brought up in a foster home. She grew smaller than most, being only a mere four foot when she turned eighteen and was let out on the streets.

This angered Bellona, for she wanted to be a police woman. She strived for growth, did everything she could to eat and eat, until one day she was introduced to Mary Margaret, a woman of great, and evil, power.

Mary Margaret, who we shall dub M&M for the sake of lightening our drab story, was a woman who… ‘fixed’ others, by preforming terrible, yet effective experiments. Bellona was first cut. She was cut on her face, and had a serum of sorts poured into the cuts. Then, she was stretched. Yes. She was placed on a table, and the table shifted, slowly stretching her body to the point it felt her skin was ripping. She was stretched until her body could stretch no longer, when the skin of her eye lids was pulled so far away from her eyeballs they could be seen. A small girl, with mousy brown hair, and to big brown eyes was all Bellona thought she would ever be.

And then, she died. But this wasn’t the end of Bellona. No, Bellona was awakened as “The Caster of Dreams”. She preyed on those who dreamed of fear and destruction, used their negative emotions to fuel her own. And then? She became the crazed,  remorseless, gun for hire she is today.

Bellona is a whirlwind wildcard. She answers really to no one, she is unafraid to speak her mind, and will not hesitate to kill you. Or worse. Because with her… Killing is merciful. Usually when given a contract, Bellona stalks her quarry for days, before sneaking into their home as they sleep. She will play with them, as if in a scene from a horror movie. Slowly torturing their family members, while making them watch, before moving onto the contract.

Awakening as a scarred woman, she carried over her pain from her past life. A pink haired woman, who stood at five foot, zero inches, given assets she’d dreamed of as a teenager, perfect, almost flawless skin, and beautiful blueish, minty green eyes, she was the envy of many. When she covered her scars with layer upon layer of make up, that is. Usually, despite the horror and fascination in the stares she receives when she does venture from home, she is wearing her scars on full display, not caring that her face is oddly disfigured. To her, the scars add to her warrior like beauty, and that is something Bellona cares about much more, than spending hours on using makeup to cover them, when she could be using that time, to kill people instead.

In a way, Bellona is immortal. She does not age, does not grow, or gain weight. She stays exactly how she is, forever, and ever, all throughout her eternal existence. Lonely, hoping desperately she will find her true love, but not truly, counting on it.

An odd assortment of weapons, usually daggers, knives, consumables, things of the sort.

Things noo else shall ever know.

Killing, is just another form of cleansing.