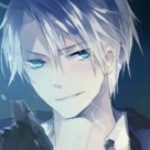 I am Bivodyr, Lord if ice. I am ice dragon

I have been asleep for thousands of years and awoken by a curious human who seen himself as part of a dragon cult. Much to his surprise the dragon looks like a man. His eyes ice blue and with a smirk as cold as ice. The Dragon stood up and towered over the man. The head of the dragon lowered and was larger than the cultist also. The cutest bowed expecting to be rewarded for wakening the dragon from its slumber. Instead he was met with a cold blast of air from the dragons nostrils that froze the man compleatly . Large wings would streach out and start to move as he started to rise to the air. A loud roar could be heard as the land itself trembled to the sound of it. The large dragon flies off to see how the world has changed.

In Human form he is a 6ft man with a clear and well spoken manner. He has much respect for women mostly and is a charmer. His behaviour might be flirtatious but he is more Devious than he seems. He is a collector and hoarder and that even counts for the hearts to those he calls Angelic in beauty. Only one would be able to be anything else but she is still in slumber.

Personality- Devious, charmer and has a dark sense of humour.

Blonde hair, blue eyes. 6ft with dragon tattoo that streaches all over his body. Muscular but thin. Wears a blue shirt and black jeans. Black boots.