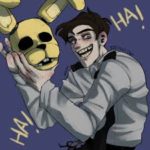 Most of his life outside of the franchise is unknown, but it’s heavily implied that he had a very miserable existence, to the point that he felt that life owed him for his sadistic behavior. He also isn’t as psychotic when he is himself, not in disguise.

William Afton is also rather ungrateful, having murdered Charlotte Emily despite the fact that if it wasn’t for him, then the franchise wouldn’t have achieved its earlier success.

In The Silver Eyes, William Afton originally the co-owner of Fredbear’s Family Diner and Freddy Fazbear’s Pizza alongside Charlie’s father, Henry. Being the mechanical genius that he was, Henry created the two springlock suits, one in which William would use in his killing sprees.

On Halloween, 1982, in Fredbear Family Diner, Afton donned the Spring Bonnie suit and kidnapped Sammy, Charlie’s twin brother, when they were both toddlers. While Afton was suspected of committing this murder, he wasn’t charged; as a result, the diner ends up closing down. Freddy Fazbear’s Pizza was established a few miles south of Hurricane, Utah, and once again, Afton disguises himself as Spring Bonnie, lures five children to the backroom, murders them, and hides their bodies.

One of his notable victims was Michael Brooks, who later went on to possess the Golden Freddy costume. Around the same time of Michael’s murder, he killed the other 4 kids at Micheal’s party, Susie, Cassidy, Fritz, and another boy described as having a grey and black striped shirt, who went on the be the Missing Children. This time, Henry is also suspected of committing the murders, but, considering that the bodies were never found, he was let go. Out of grief, Henry commits suicide (letting an unknown animatronic kill him). The pizzeria is closed down, and a mall was built over it.

Ten years later, a memorial was held by the parents of the late Michael Brooks, and Charlie and her childhood friends return to Utah to attend it.

They meet with a security guard named Dave Miller, who later turns out to be Afton operating under a fake persona. while they were revisiting the pizzeria for the third time; they begrudgingly take him along, but Charlie notices a series of scars on the back of his neck.

When the group of friends notices that Carlton was missing, they report it to the police department, but action wasn’t immediately taken, due to Carlton’s habit of being a troublemaker. Officer Dunn go to the pizzeria to investigate, but Officer Dunn immediately stabbed to death by William Afton.

Carlton Burke wakes up to find himself in an old, malfunctioning springlock suit; William Afton warns him about making any sudden movements, and he takes his shirt off, revealing more scars from a springlock incident.

Charlie and her friends return to the pizzeria to search for Carlton Burke. William Afton confirms that the animatronics were being possessed by the ghosts of the children William Afton murdered, and that they were going to kill Charlie and her friends out of confusion. When told that they would also kill him, he expressed no concern, stating that as long as he had the Spring Bonnie suit on, he would be safe from the children’s anger.

As the group was about to leave the pizzeria, William Afton grabs Charlie by the back of her neck, and threatens to choke her to death. Remembering how the spring lock suits operated, Charlie reaches into the neck of the suit and sets off the spring locks, piercing Afton and killing him slowly. The main animatronics-Freddy, Bonnie, Chica, and Foxy—appear, and they drag the dying Afton away. William Afton becomes Springtrap.

Afton is described as being obese around the time that the serial killings occurred, but he eventually lost that weight while in his Dave Miller persona.

The most notable trait concerning Afton, however, is the series of scars that could be found on the back of his neck and body. It was revealed that he had survived a previous spring locks incident, though he barely escaped with his life. His eyes are also described as made of glass, dead, and pale.

As Dave, William is stated to be tall, and his security guard uniform didn’t seem to fit him. He most likely had some longstanding illness, as his skin was described as being sallow in appearance.

After surviving the fires