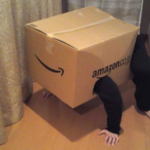 Copies of this data may be used for the purpose of replication of this experiment ONLY inside Amazon.com Inc.

Amazon Prime: Amazon Box can summon anything it wants inside itself, assuming it can fit and ??????????????????????. It can reach inside itself and pull it out using its arms, and may ‘deliver’ the object to a customer. Very useful for deliveries.

Pennies: The Amazon Box craves pennies, and has been known to attack those who do not comply to its demands for coinage. If this creature asks for pennies, remain calm. Toss a few over, then simply walk away. The box will leave you alone after you satisfy its craving. If you happen to cross the path of the Amazon Box often, refrain from giving it too many pennies at once. It’ll begin to see you as a friend if you do, and will demand more and more every time it recognizes you. If this happens, wearing a mask which covers the entire face has been found to prevent recognition.

since he rules over an entire galaxy because of the online shopping service he owns, I get to roam various places including this… weird shithole

fear me, Hellifyno, and bow down to your overlord Jeff Bezos

just like this, but with scaly clawed hands and black, fuzzy arms instead of some random human’s limbs

also without a human’s butt sticking out of the back

no matter where you are or what you’re doing, Amazon Box will always be right there with you, watching your every move…

…so that your ads can be personalized

I'm a fucking box god damnit, I have no religion or beliefs