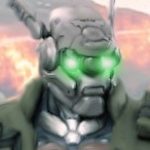 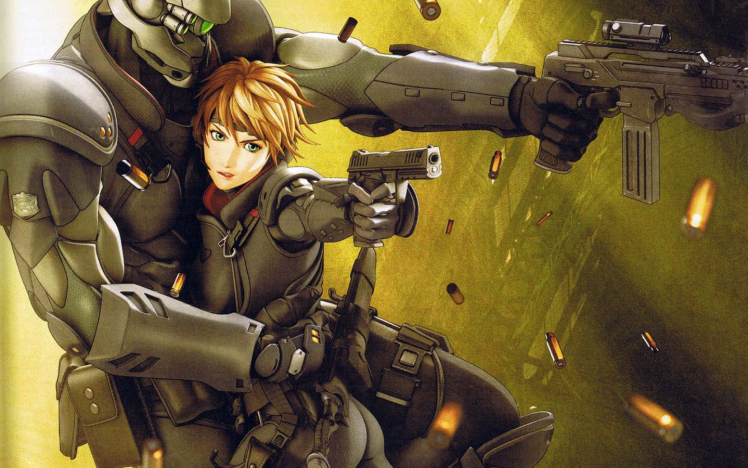 Briareos [Hecatonchires Cyborg System] is a character from Masamune Shirow's Appleseed manga and its adaptations in anime.[1] He is one of the two protagonists of the series, the other being Deunan Knute. Briareos is a trained ESWAT officer, his point man is Deunan. They met in her father's SWAT unit before World War III broke out. Briareos and Deunan are lovers and have been involved since before the war. Since moving to Olympus with Deunan, they have joined the ESWAT unit (Extra Special Weapons And Tactics). He is named after Briareus the Vigorous, one of the Hecatonchires (hundred-armed giants) of Greek mythology.

Originally an African man from the Mediterranean, Briareos was used as a terrorist by the KGB while still a child. He sought political asylum in the former USA after killing the unit’s commander of operations – for which he was put on the international “most wanted” list as an assassin. After meeting an agent from Special Security Forces, he began operating as a partner with the man’s daughter, Deunan Knute. Caught in an explosion, the 31-year-old survived only by undergoing a full cyborg body replacement – and has been making modifications ever since. Briareos is a prime example of the technology of cybernetic implants in Appleseed. Although his body is almost completely artificial, he suffers little loss in humanity. His outer skin is elastic, capable of feeling sensation, and the temperature can be adjusted to the cyborg’s preferences. He has eight eyes mounted on his head, four in his face (the large sensor in the middle is actually his nose) two at the bases of his “rabbit ear” sensors facing rearward, and two at the tips, which allow him to safely look around corners. His human brain is augmented by an auxiliary “brain” that acts as an information processor, and is capable of handling information in a conceptual format rather than hard numerical data. His cybernetics controller, the Hecatonchires system, is named after the same 100 handed giants from Greek mythology. It is capable of controlling dozens of limbs or other cyborg bodies independently from one another, with no additional strain on the user. In the manga, it is pointed out that a cyborg equipped with the Hecatonchires system is able to fully control an entire aircraft carrier on his own. This ability to process multiple limbs at once is seen in the film when he is seen using one rifle in his Landmate’s arms, and another in the control arms.

Eye Color: The lens colors change with his “moods” and his mods of sight picture.

Briareos sports an exoskeletal combat skin, as well as an internal combat chassis to protect his multiple CPU’s, and internal soft organs. The skin adjusts itself with the thought from Briareos himself, or automatically as a failsafe to protect the cybernetics vitals, by hardening itself to the point he can become impervious to small arms fire, fragmentation grenades or flack, yet can absorb vast amounts of energy that could otherwise fracture such materials into pieces. He even has adapted to use the absorbed energy to momentarily create a field around his body to increase his kinetic force for striking, taking additional blunt force trauma and increased close quarters combat efficiency .

He also wears a combat thigh holster rig, complete with two speedloaders, and his .460 Devastator revolver. Subdued in dark urban combat colors, it’s adjusted to Briareos’s attributes, as well as being created from his own design. It comes with a 7 in barrel, with an inch compensator attached. Briareos also sports a combat rifle as well in a large black duffel bag which he only carries in combat situations. When needed, the large rifle can be securely attached to a “weapons plate “ upon his back, that can either act as a means to secure the rifle upon his back, for faster access, or also be a means of dragging the cyborg in an emergency, should the cybernetic be shut down, or ultimately, take too much damage, or be killed. Both weapons utilize technology that is synced with Briareos’s Heads Up Display reticle within his vision schematic. Meaning he doesn’t have to hold the weapon up close in order to fire accurately. Master of close quarters combat, Briareos is fluent in many types of martial arts, and uses a mixture from many forms to round out his hand to hand skills. One person does matter, and one person can change the outcome of a fight.