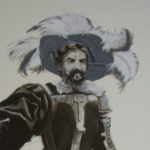 I am Erwin Steiner, a soldier for hire. I have travelled a great deal since I left the military, selling my sword to those who could afford it.

Born within the small town of Schonighagen, in the Schönherr Kaiserreich, my parents were common folk. My father was a stonemason and my mother worked at the watermill at the edge of town. I grew up in something a step above poverty, but I remember the cold winters and the days without food every now and then. When I was fourteen I saw the Kaiser’s soldiers come to our town, banging a drum and carrying a banner. They were recruiting for a new unit that was being founded, and I saw an opportunity to leave, for a better life. Lying about my age, I signed up and shortly found myself in New Dawn. I’d never been to the city before, and it was a shock for the first two weeks, but the training and the army lifestyle left little time for exploring the city, and it dominated most of my time.
A decade later I ended my time with the Kaiser’s army, after the unit was brutally decimated on the field. The survivors decided we’d had enough; the men of the unit that kept us going had died that day, and it felt like the time was right for us to go our separate ways. Once again I found myself in New Dawn, and I stayed this time, getting to know the place. However, it was not long before my money ran dry, and the call of the field echoed in my bones, so I took up my arms once more and left to pursue my current career, as a travelling mercenary. I’ve yet to find a mercenary company that takes my fancy, but I’ve done a few years here and there in their employ, but it just never feels the same as the old unit did.

I guess you’d say I was tall, which is fair enough. I’ve a little bit of a gut on me, since leaving the army and getting some uninterrupted drinking time, but I’m by no means unfit. I can still fight, and run, like any soldier, it’s just obvious I like my ale more than my marching.
I’ve decided to grow my hair out, and I’ve now quite an impressive head of long, brown hair. It’s mousy brown, and reminds me of the family dog I grew up with. I’ve a slight beard, nothing too fancy or big, just something to break up my face. I got used to having one in the army, and I’ve never really enjoyed shaving. My eyes are a grey-blue, like the sky just before the summer rain. My mother always told me they reminded her of the day I was born.

I’ve picked up a few tattoos, here and there, and some of them are pretty good. My favourite is a symbol I saw on campaign. It’s like two snakes, together, facing each-other… but the snakes are one!

That perhaps the Gods don't exist, or at least they've left us to it. There's too much killin' and sufferin' and all that nonsense for them to really be "guiding us".