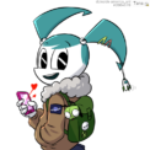 Um I'm not picky about the gender of them..

Single as of now

Thanks to having advanced artificial intelligence, Jenny’s personality is that of an eager, young, tomboyish teenager. She desires a sense of freedom but also wants acceptance from her peers. She generally possesses a kind personality and likes anything pertaining to teenage activities, but becomes agitated when her mother or her duties get in her way of her enjoyment. Unfortunately, being kind and sweet, she is easily trusting of others and, as a result, can be quite naive. The Crust Cousins, Brit and Tiff, have often taken advantage of this for self-gain or to humiliate Jenny. Despite this, she can also be mischievous, hotheaded, careless, and stubborn at times, but always learns from her mistakes.

In her duties as a crime fighter and global responder, she is vigilant and determined to get the job done, though she can be reckless and quick to jump the gun in very few instances. 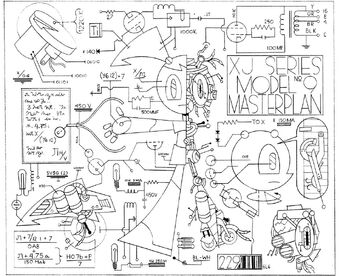 Jenny stands at 6.6 feet (1.98 m) tall and weighs roughly 600 lbs. She has blue “pigtails” with bolts connecting them to her head that can act as rocket boosters, blue “bangs”, white skin, blue “clothes” (a crop top, a miniskirt and boots), a belly-bolt (a bolt that simulates a belly button) which doubles as a linchpin (as mentioned in “Around the World in Eighty Pieces“), hands with 4 fingers each and center holes, a “false nose”. Jenny has no ears, instead possessing an auditory system “decades ahead of its time” (“Ear No Evil“). Her body processes are carried out by a fully-functional, metallic electronic brain, which her eyes are connected to (“Mind Over Matter“). Her body also contains several access ports for downloading, charging, and other purposes.

Jenny has been able to don a pseudo-human form in her ambition to be a normal teenage girl on two occasions:

In “Raggedy Android”, Nora designed an Exo-Skin for Jenny to freely go around in public during a amusement park event, but the first prototype skin was rushed in production within a day, which resulted in an exo-skin looking more akin to an old ragdoll that ended up scaring everyone at the park. By the end of the episode, Jenny decided to take off the Exo-Skin and reveal her true nature, and has since been able to blend into society freely as a robot.

In “The Return of Raggedy Android“, after the owner of Mezmers (Mr. Mezmer) refused to serve robots, Jenny goes to her mother to use the exo-suit again. This time, Nora had made improvements to the suit to make Jenny look more human — human enough to fool anyone to believe that Jenny was a real girl. However, the skin ended up possessing a mind of its own and began persuading Jenny to act like a “normal girl” by dropping her robotic identity and adopting a persona of a girl more focused on diets and not getting her hands dirty. However, one day as Mezmers was being raided by the Space Bikers and the exo-skin constraining her from confronting the bandits, Jenny poured a chocolate milkshake on herself, making the skin short-circuit and come off, giving Jenny her freewill back and being the vigilant hero she has always been.

While disguised as a “human” in her Exo-Skin, Jenny had light skin with freckles and rosy cheeks. She had red hair tied into two pigtails with black bows. She wore a blue dress with short sleeves, short skirt, white socks and black Mary Jane shoes.

Mine to keep to myself

Oh well in nothing really