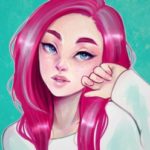 “Despite your betrayal, and the wounds you left on me, somehow I still find myself wishing you were here..”

Calypso was born in the city of ancient Athens, when gods and goddesses, fairies and monsters, and legends were still believed in. A time when an apple was a marriage proposal, and a woman’s opinion was frivolous. The girl was born onto a human mother and father, peasants most like, though their names, ages, and origins are unknown. Weeks after being born premature,still an infant suckling from the tit of her unworthy mother, it became apparent that Calypso, (who’d been named Amaria at that point) would bring great shame to their family. On a cool, windy September night, when the moon was high in the sky, her mother stole out to the forest. There, she left her baby, thinking, hoping that she would be claimed by wolves or an equally rabid animal, and returned to the city.

But deep within the woods, drawn to the helpless cry of baby Calypso, a fairy lurked. A fairy, not small, and loveable, with magical fairy dust to make you fly. Oh no. This particular fairy was one who was called Styrker. This fairy was a trickster, a thief, one that liked stirring up great floods, and setting fire to whole cities while he laughed from the safety of the forest. Of his forest. This fairy was a wraith, A cur upon the ancient world. And yet, he followed the cries, found Calypso, and for some reason, he took her as his own. He raised her, modeled her after him. Calypso grew to be a master thief and trickster just as her ‘father’ was.

She’d never been told of her origin. Believed that she, too, was a fairy just like him. After all, her hair was a delightful pink, long, and flowing down past her butt. Her eyes were an unearthly blue, so bright they seemed unreal.

For sixteen years she believed she was Strykers daughter, but her whole world came crashing down on her sixteenth birthday.

As a gift, Stryker had decided to take her into Athens. They walked along, enjoying the festivities, her hair covered by a shaw, and her eyes Were hidden by a mask. They danced, enjoyed themselves, and by the end of the night, both were quite deep into their cups.

They walked, listening to the soft cicadas and the end of the party. Arm in arm, Calypso happily taking in The night, when Stryker had kissed her.

Her features had blanched, and Calypso had froze, before pushing him away in shock. But Stryker was set on his goal. He pushed her harshly against the alley wall, and bent down, smashing his lips to hers harshly. She fought, wiggled away, and smacked him before turning on her heel, and sprinting away with her skirts gathered around her thighs. Waiting for morning before she returned home, fury in her actions.

She’d stormed inside, intent of screaming and reprimanding him, but she found him sleeping in a pool of his own vomit, and disgust overcame her.

She didn’t even remember bringing the sword down upon his head. But she had, and only when his head rolled with a sickening sound did it dawn on her. She’d killed her father in cold fury.

Something within her snapped then, and she turned the sword upon her self. Killing herself, and yet she didn’t.

She rose again, undead, as a spirit. A ghost of sorts. Still, she is able to touch, feel, hear, and do the things a normal person can. But no longer is she warm.

The heat has faded from her skin, and left in it’s place a terrible, terrible cold. Other than that, Calypso is, and always will be, a fairy.

Long pink hair, usually tied in a braid or a ponytail. Unearthly blue eyes, big, much like a mermaids. Pixie like face, with a nice body, more of a butt than a bust, giving her a pear like body type. Freckles on her face around her nose. Soft look lips the color of pink roses. Skin the shade of caramel.

She stands at four feet, and weighs sixty or so pounds.