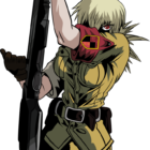 Single as of right now

Personality
Seras is a strong-willed woman and apparently had always been since childhood which is confirmed through her flashbacks. Seras is often considered a tomboy; a very brave, strong, and heroic young woman who while exhibiting a wild temperament, is not afraid to question the orders of her master if they cross with her personal beliefs. Her devotion to morals and integrity is rather unusual, considering her horrid past. However, she is a loyal and trustworthy soldier who will diligently follow the orders of her commander, provided said commander has proven his or her worth. Her level of maturity in comparison to the other characters is somewhat questionable; she seems to be the child the others could not be, yet possessing a sort of worldly maturity and superficial intelligence that most other characters lack, as well as a sort of ‘nurture winning against nature’ mentality, as opposed to most other characters. She’s the “light that stands out from the darkness” (quoting Kouta Hirano from an interview).

History
Before Hellsing
At the beginning of the series, Seras’ history is unknown, though hinted at through a very brief flashback in OVA I. Later in OVA IV, Walter tells Alucard that he had not met her family, as she had been orphaned. In Vol. 7 and OVA VII, Zorin Blitz casts an illusion on Seras, causing her to flash back to her very dark history. It is discovered that Seras’ father, a police officer, “got in too deep” during an undercover mission. The group he had infiltrated traced him back to his home and brutally murdered him. Her mother, Mrs. Victoria, hid Seras in a closet and then confronted the criminals, who immediately killed her as well. A distraught Seras charged out and stabbed one of the criminals in the eye with a fork before being shot in the gut. The flashback ends with Seras seeing glimpses of the criminals raping her mother’s corpse.

Sometime later, Seras was sent to live in an orphanage. The horrific murder of her parents caused her to react violently to bullies and other children. None of the teachers took kindly to her and discussed removing her from the orphanage if she continued to cause more trouble. In another flashback, Seras expresses her strongest wish – to become a police officer, despite being persuaded against doing so. It’s unclear what happens to her afterward, whether she got adopted or not but she managed to become a police officer as she dreamed she would.

Seras was originally a police officer who, along with the rest of her squad, was sent into Cheddar Village to investigate a priest who was responsible for multiple homicides. A vampire disguised as (or possibly was formerly) a priest had taken control of the town and turned its inhabitants into Ghouls. The vampire took Seras hostage; unsure if she was a virgin or not, he planned to rape her to ensure she would turn into a ghoul after he drank her blood. When Alucard arrived, the priest used her as a human shield to coerce Alucard into letting him live. Alucard asked her if she was a virgin, and when she confirmed that she was, he shot through her to kill her captor. In her final moments of human life, she was given a choice: to die as a human or become a vampire. She chose to live and Alucard turned her into a vampire.

With Hellsing
Given her condition, Seras was immediately employed to the Hellsing Organization after becoming a vampire. She was given a new uniform and almost immediately sent out on a mission by Integra with Alucard to eliminate some ghouls which had infested a household. While carrying out this mission she would come face to face with Father Alexander Anderson from the Vatican agency Iscariot who pierced her with numerous blessed blades from behind before proceeding to fight with Alucard.

During the course of this battle, Alucard’s head was taken off by the priest and Seras, fearing her Master dead, took it and fled. As she pulled out the blades from her body Alucard’s voice spoke to her, bidding her to drink his blood and become a true vampire. Seras, however, was too hesitant to do so before Anderson caught up to her, it was only the timely arrival of Integra and Alucard’s subsequent resurrection which saved the situation.

Sometime later, Walter revealed to Seras that per Sir Integra’s order, he disposed of her bed and replaced it with a coffin. It was then Seras was also given her new weapon, the anti-tank cannon Harkonnen. The timing of this proved fortunate as soon after the Hellsing Manor was attacked by two vampire brothers, Luke and Jan Valentine. The younger brother Jan led an army of ghouls which slaughtered the Hellsing troops and almost succeeded in reaching Integra and the visiting council members. Together Seras and Walter were able to stop this from happening. Walter led their attacks and Seras provided armed support, eventually managing to pin Jan down in a grapple she learned from her police training. After revealing the Hellsing troops were now Ghouls Jan broke free of her hold, sending Seras into the arms of the ghouls. She subsequently lost control and in a fit of bloodlust destroyed a number of them until Integra intervened.

Jan, now disabled by gunshot wounds at the hands of Integra and the council, died as an unknown entity set him alight from the inside, the vampire only giving a single clue as to who sent him, ‘Millennium’. Meanwhile downstairs Alucard killed and consumed Luke Valentine.

Shortly afterwards, a confrontation with the Iscariot Section XIII leader Maxwell occurred at the British Imperial War Museum, during which Seras successfully managed to avert another fight between Alucard and Anderson by pretending to be a tour guide.

After the encounter, she has a run in with The Wild Geese. Much later she is comically locked in her coffin by Alucard so she could be tricked into traveling in the jet to Brazil. When they arrive in Brazil, Seras awakens to Alucard telling her to prepare for battle with the Rio SWAT team.

Seras tries to protest but is berated by Alucard for her mercy toward mortals. During her master’s fight with Tublucain Alahambra, she tries to shoot at him but fails. The two are then rescued by Pip Bernadotte after Alucard defeats Tublucain.

During a fight with Anderson she tries to intervene but is scared into submission. At the meeting between the Iscariot, Hellsing, and the Queen she is a security guard of sorts.

During the Invasion of London Seras and the Wild Geese are stationed at the Hellsing Manor and she manages to destroy Zorin’s airship Alfred Rosenberg/Graf Zeppelin II. Later she easily tears through her men and comes to the rescue of the Wild Geese crew who were mostly being slaughtered by Zorin Blitz’s battalion. When she arrives she kills Zorin’s men and takes on the artificial vampire herself, only to have her memories searched, her arm cut off, her eyes busted open and wounded in the back and spine.

Pip then rushes to save her but is killed by Zorin Blitz. Right before his death, he orders Seras to drink his blood so she can kill Zorin. Seras does so and kills her and the reinforcements.

She then proceeds to save Integra from the Iscariot priests and meets up with Alucard on his return to London, astounded by his original form. Soon after she is present when Paladin Alexander Anderson dies and questions Walter for his betrayal of Hellsing. She and Integra are then invited to fight on the airship Deus Ex Machina along with The Major and The Captain. While Integra looks for the Major Seras confronts the Captain and is again being beaten by her Millennium opponent. However, with the use of a silver tooth and her familiar Pip Bernadotte, she is able to kill The Captain.

Seras is initially an attractive young woman with blonde hair cut into a flare cut and blue eyes. She had a fairly broad-shouldered torso, yet maintained a very voluptuous and buxom figure, which was further accentuated by the fact that she is considerably shorter than virtually all of her allies. Before becoming a fully-fledged vampire, she usually wore a yellow Hellsing uniform with a matching mini skirt, long white stockings, ankle fold brown boots, and brown gloves. Occasionally, her eyes assumed a red hue in moments of extreme rage or vampiric bloodlust.

As a fully-fledged vampire, her hair lightened to an almost platinum blonde color, and her eyes became permanently red. She continued to wear a uniform of the exact same style as before, but colored burgundy red instead of a yellow.

Upon fully embracing vampirism, nothing changed about her overall figure with the notable exception of her left arm. After losing the original one to Zorin Blitz, it was replaced by a mass of writhing black and orange shadowy matter that initially manifested as a whip-like set of tendrils. Shortly after transforming, however, she learned how to mold the shadow matter into the shape of her original arm. Thirty years after transforming, she demonstrated the ability to shapeshift this shadow matter with far greater precision, at one point going so far as to use it to briefly mimic a full copy of Alucard’s typical attire to wear as a joke. In the OVA, Seras’ shadow also developed a resonating effect similar to Alucard’s, which became more prominent when she was in battle. Due to her obtained immortality, she now remains in her 19-year-old form permanently.