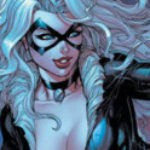 Felicia Hardy a.k.a. The Black Cat

“Don’t knock them. In my line of work, where you look for every distraction you can get, these tend to come in handy. And since this costume lacks pockets, where else would I hide all my tools?”

Felicia grew up as the daughter of a world-famous cat burglar named Walter Hardy. Walter taught her to be confident and to seize life by the horns. Assaulted by her college boyfriend Ryan, Felicia began to train in martial arts and acrobatics, her ultimate goal to kill her rapist.
Before she could, Ryan was killed by a drunk driver. Unable to exact revenge against the man who ruined her life, Felicia became a cat burglar like her father, determined to be even better than he was. Donning a black costume and mask, she became the Black Cat and sought to steal from the world to replace what was taken from her.
Her first act as Black Cat was to break her dying father out of prison. Despite Spider-Man’s interference, she succeeded; though Walter died at home shortly after.
More frequent run-ins and even a romantic relationship with Spider-Man soon followed, and wanting to be his equal, she acquired her signature bad luck powers. What she didn’t know is that her powers were provided by the Kingpin, and they came with a price.
Thanks to powers provided to her by the Kingpin, Felicia can negatively affect the fortunes of her enemies. In the same manner that a superstitious person believes misfortune can be caused by actual black cats, she can cause someone to trip, miss an attack, fall down, or hurt themselves, keeping her opponents from harming her in battle.
Before she sought out powers to try and be on equal footing with her love Spider-Man, the Black Cat was an ordinary, though highly-trained, cat burglar. Now, her powers make every encounter with her as unpredictable as possible, naturally making her very difficult to catch.
Other than Felicia’s bad luck powers, Black Cat is an expert thief and skilled acrobat. She also has extensive knowledge of the criminal underground.
The Kingpin is chief among Black Cat’s enemies. Not only is he the man behind her power upgrade (without her knowledge), but he’s been known to manipulate her on many occasions. Since he gave her the powers, Kingpin feels like Felicia owes him. She, of course, doesn’t see it that way.

Black Cat once worked with superspy the Foreigner in a conspiracy to kill Spider-Man, even carrying on an affair with him and with Peter Parker simultaneously. She always planned to betray Foreigner in the end, and since he could kill her easily, she had to flee the country to escape his wrath.

The life of a cat burglar is a solitary one, and though Felicia has temporary alliances with other criminals, there are only a few the Black Cat keeps close.
One notable exception, of course, is Spider-Man. Depending on the week, Spidey is either a friend, lover, or bitter enemy. Spider-Man is the first hero Black Cat encounters after beginning her career as a masked burglar, and Felicia develops a crush immediately. Not one to associate with criminals, it takes Spider-Man awhile to return the affection; but eventually, he is won over by Black Cat’s charm. After kicking off her career in masked cat burglary, the Black Cat quickly drew the ire of Spider-Man, who didn’t much care for masked burglars. Felicia’s immediate infatuation took Peter Parker off guard, considering he never became comfortable with romantic attention from women. Despite Felicia’s life of crime, they began an on-again, off-again romantic relationship that would last for several months. Felicia even considered giving up her life of crime for Spider-Man.

After the Black Cat was injured during a battle with Doctor Octopus and landed in the hospital in critical condition, Peter Parker decided he cared for Felicia enough to reveal his secret identity to her. He was met with bewilderment. Black Cat couldn’t understand why Peter, despite his Spider-Man alter ego, continued to live his mundane, paycheck to paycheck life. To her, the life of a costumed thrill seeker was everything. There was no other half. She made Peter put the mask back on and leave it on as often as possible. Black Cat’s Costume: The costume she currently uses was designed by the Tinkerer, created using leather material, and is designed to increase many of her natural physical attributes far beyond normal human levels by means of micro servos embedded into it.
Peak Human Strength: The Black Cat’s costume increases her physical strength to levels beyond the natural limits of a woman of her weight and physical build. In fact, her strength is increased to the maximum of human potential, enabling her to lift approximately 800 lbs with maximum effort.
Superhuman Speed: The Black Cat’s speed is similarly enhanced, though to levels that are slightly beyond the capabilities of the finest human athlete. Over short distances, she can sprint at a top speed of about 40 miles per hour.
Superhuman Agility: The costume she wears also possesses various implants. Without these implants, she has the agility of an Olympic level gymnast. However, the implants augment her natural agility to levels that are beyond the capability and physical limits of the finest human athlete.
Retractable Claws: The gloves of the Black Cat’s costume contain steel micro-filaments that form retractable claws at the tip of each finger when she flexes her fingers by triggering a magnetic surge which condenses the filaments into polarized talons. These claws are highly durable and razor sharp, allowing her to tear through most substances and to easily scale walls.
Equilibrium Earrings: Felicia wears earrings obtained by the Tinkerer that interact with the balance centers of her brain to grant her enhanced agility and balance, increasing her natural bodily equilibrium and allowing her to accomplish feats beyond the capabilities of the finest human athlete.
Electromagnetic Contact Lenses: Felicia wears contact lenses obtained by the Tinkerer that allows her to see in various ranges of the electromagnetic spectrum, such as infrared and ultraviolet light. When wearing these contacts, Felicia’s eyes appear to have blue irises as opposed to the green irises that Felicia naturally possesses.

Grappling Hook: The Black Cat has a miniature grappling hook device hidden in the “fur” of each glove, designed by her father Walter Hardy, which enables her to swing from buildings in a manner similar to Spider Man and Daredevil despite lacking the associated speed of either. She can also use the cable from this device as a tightrope, wall scaling device, swing line, or as a weapon in combat.