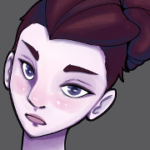 About me as a typist:

I am an 18+ roleplayer, so I’d prefer to keep it that way when playing with others. This is for a lot of reasons. I don’t feel the need to explain any of them as this feels pretty self-explanatory.

I like para-rp the most. But I’m not married to 4+ paragraphs. I can keep it to one. I generally tend to try matching the length of whatever is written to me for fairness.

I’d really appreciate it if you don’t try to control my character. It’s not hard to write an open-ended post which allows me to choose what I want to interact with. If you can’t do this, I’ll likely just stop rping with you entirely without word. I don’t feel it necessary to explain myself when a boundary is crossed.

I’m not married to my characters being alive. But ask me first—I may be married to them on that day.

I’m also not married to the particular character listed in my profile here on this page. I’ve been doing RP for a while. I have an entire graveyard to pick from. They’re lonely and cold. I’m certain they’d like a break from the big dirt nap.

If something I wrote confuses you, ask me! I’ll do the same for you.

Nature/personality: Precise and idealistic. She doesn’t like to bend to the will of others. A heavy believer in “say what you mean, and mean what you say.” She is easily put in a sour mood, and can usually find herself intertwined in impulsive decisions. She does, however, care and will find loyalty in those she is close to. She just has to get there first.

Height: Taller than average, about 5ft 8in

Significant marks: One solid red ring tattoo–all the way around left wrist. Some light scars on knees and elbows. Scar on the back of her head. Can be seen when hair is up.

Impairments: None so far. (Willing to rp perma-injuries if fights occur. Just make sure to ask.)

Clothing: An oversize hooded top (flowy but with enough room to conceal objects if need be), capri style bottoms, striped socks poking out of some rather worn high-top style boots. All garments are black except for socks, which are grey and black striped.

Abilities: Can manipulate light and shadow only at a minimal level (ie- making a room dark or causing a shadow to form for a brief moment)