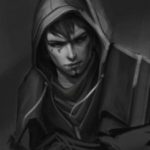 Chitose is the sole remaining person of the once crime family known as the Tsuru clan.

Chitose’s story was not always one of strength and confidence. In fact, Chitose was raised taught to be a servant more than anything. Chitose was born a neko male, one that lacked brute strength. Being the member with the weakest physical capability, he had been trained in the art of serving other people. Chitose was the stepping stone within the Tsuru ranks. Despite being the first born son of the clan leader, Chitose was treated more like the out cast. It hadn’t always been bad within the Tsuru clan for Chitose, as he had been taught to fight, survive, and even craft weapons. Chitose was not the only son of Damien Tsuru, as he once had a brother named Victor. The two had non-stop fought, trying to always be better than the other. Despite some of Chitose’s greatest efforts he could never beat his brother in combat. The clan leader had sent Chitose out on a mission, one that Damien believed to be of great importance. When Chitose had returned a successful male, he found the entire Tsuru clan slaughtered. His father Damien had lay upon the floor of their mansion coated in his own blood, his face having been smashed in by a great force. Niel Tsuru was found decapitated within the kitchen of the mansion. The various other members had also been slaughtered, any only by a single entity. With the majority of the clan missing, Chitose left to live with his aunt Vi Tsuru. As the time with Vi had been torturous, filled with multiple encounters of unsanctioned sexual encounters. (18+). After Vi had fallen victim to the unknown parasite that was taking out the Tsuru clan, Chitose went on the run. While on the run Chitose ran into Hellifyno, a planet that seemed rather friendly at the time. Within the first few months of landing on the planet, Chitose had felt much like an out-cast. As many had turned their backs upon the neko male, Chitose turned to the welcoming arms of Daniel Plainview. Chitose grew within the ranks of Daniel Plainviews hellish armies, even learning how to control lightning through a magical stone passed to him. Amaranta St. Clair took a rather big liking to Chitose’s servant like ways, even taking her liking as far as turning Chitose into a vampire. As Mara’s childe, Chitose served the woman until her untimely death. With Daniel and Amaranta both in the ground there was no where else to go. Daloki aided in rehabilitating Chitose back into the world of “Heroes”. Fighting in war after war, bar brawl after bar brawl, Chitose had been searching for another sense of being controlled. That was when he met the “Fabled” Zazel LunarClaw. For unknown reasons, Zazel took a liking to Chitose. The kilvian king trained Chitose in various forms of martial arts and aviation fighting tactics. After having proved himself to Zazel, a great gift was bestowed upon Chitose. A kilvian heart was placed within Chitose’s chest, replacing that of his own heart. After weeks of immense pain and border line misery, Chitose’s body accepted the kilvian heart. With the core deep inside of his body, Chitose had become a kilvian soldier for his leader Zazel. With the guidance of Zazel, the core was perfected within Chitose’s chest creating almost a perfect soldier for the man. Months after perfecting his core, Chitose engaged in almost a week long battle with an old Demoness known to many as Girly. After almost besting the demon in combat three; Girly tainted Chitose with the void allowing Chitose to summon void lightning from his core. A few years passed, Chitose’s body was wounded severely, one that would have put many on their death beds. That is when Chitose ran into a man named Augustus Giovanni. Making a deal with the devil, a new body, one much stronger was created for Chitose to inhabit. With the transfer of the core complete, Chitose’s new body created by the shadows was ready for combat. The years went on with this new body, one that was capable of a great many more things than his old one. That was when Chitose lost his left arm in combat. With the handiness of the mechanic Chitose, a new cybernetic arm was built to replace that of his lost arm. After being mated to a lycanthrope woman named Briar, Chitose thought he had felt love once again. That love was ripped from Chitose one day when a man named Bobby waged war on Hellifyno. The tavern was attacked by a group of Bobby’s elite soldiers. After Bobby pinned Chitose to the floor, he shot six copper plated bullets into the back of his body. Unable to generate electricity to heal his body, Chitose was forced to watch Bobby execute Briar in front of his very eyes. Shortly after that Chitose was taken hostage by Bobby, forced into servitude to create weapons for the armies of Bobby. One day during his entrapment, Olivia, Briar’s sister came to visit Chitose in his cell. The female lycan went into a primal rage, tearing off Chitose’s right arm. Using her claws to mirror the scars on the right side of the male, Olivia left Chitose broken and destroyed in a cell. When Bobby fell from his graces, Chitose went back into hiding to craft another cybernetic arm. After the years, Chitose went into hiding. Having actually left Hellifyno on the hunt for his brother, he came back one day.. But why? That question still remains unanswered.

Chitose stands at a solid 6ft 2 with broad shoulders. The most noticeable feature of Chitose would probably be his face. Upon the left side of his face, three slash scars travel vertically down from his hair line to his jaw lineeven crossing the eye lid. The right side of his face is mirrored with these scars. His nose is crooked from being broke in copious amounts of fights. His body type mirrors that of an extremely fit athlete. The typical chiseled abdomen muscles, perfectly sculpted pectoral muscles. Instead of two humanoid arms, he has two inky black cybernetic arms created out of a lighter version of adamantium. His hair is usually a mess of short black hair, though every once and awhile he brushes his hair down to the right side.

Serenty: The blade of this katana measures at exactly 36 inches, with a hilt that is six inches. The longer a fight goes on, the large the katana is capable of going. Once one of Chitose’s prized weapons, he now seals the weapon away as it has kept the souls of the victims he has claimed.

Rail-Handgun: A personally crafted weapon out of Chitose’s own arsenal that he has created. The gun is in the shape of a .45 magnum, except the fact that the wheel, hammer, and barrel have all been altered to fit into a multi-shot railgun. The bullets travel at roughly 8,000 FPS, capable of piercing armor as if it was tin.

The void is slowly tearing the sanity of Chitose apart.

That pain is progress. Without pain, a being is nothing.