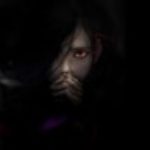 A quiet girl who's half demon, quarter mage and human.

Violet was originally from a small, overpopulated dimension. Her father abandoned their family and went back to Hell. Violet’s mother did everything she could to raise her daughter well, but she soon died from one of the many waves of plagues that the dimension had. Violet was sent to live with Mage Nuns, who pushed her to use magic. After a few years of raising her, they had come to the conclusion that she was a very scared little girl. She was pale and quiet. Whenever she was brought outside, she would cry in fear of the one thing that followed her. Her shadow.

On her twelfth birthday, Violet was assigned Shadow Magic. In the dimension she lived in, the magic one could perform was their greatest fear. She learned how to master shadow bending. She could create weapons from the darkness, and use other people’s shadows to do her work. When Violet was eighteen, the nuns presented her with a dark purple cloak. It would be a sign that she had joined the Church of Spellion, a religion in which magic was their savior. Violet did not want this, and ran away from the nuns with her cloak. She was marked as a traitor, and sentenced to death. Wanted papers with her face drawn on them were everywhere. Violet went into hiding, but was soon found by one of the highest ranked families in their dimension. The magic of fire had been in their family for generations, after their mansion was destroyed in a wildfire.

Violet was taken in with the name Margaret and her appearance was changed to match the family’s. They dyed her hair white and took her cloak and armor. They put her in tight red dresses and made her act like a mindless drone. After years of living in high ranked agony, she found her shadow found her armor. In the late night, Violet put on her armor, found her cloak stuffed in an abandoned shoe trunk, and cut the white dye out of her hair. It had begun to grow out, and her original midnight color shone through. And off she went, with her shadow and a bag of food to accompany her.

She safely escaped the dimension and went to a new one. One where people worshipped gods, and humans were not considered weak. Eventually, Violet’s hair grew back to the length it used to be. She continued to battle and go on journeys and quests.

Long black hair with red eyes. A bit shorter than average. Looks like a sweet girl, but there’s a lot to unpack.

She wears a dark purple undershirt tucked into a black and gold belt. Over that is a type of black jacket with gold trim that covers most of her hand. It’s longer in the back, and rounds out to around her knees. Her black pants are pretty standard, along with black steel toed boots that go up to her knees. The laces, trim and bottoms of the boots are dark purple. On top of that, she has a dark purple cloak. The broach that connects the two pieces is an intricate design that almost looks like an eye.

A shadow scythe that she can summon from virtually any kind of darkness. Numerous weapons hidden about her person, including many forms of knives, daggers, arrows, and even a sword. A silver locket that she can’t touch, because it will burn her skin and leave scars. A miniature spellbook she stole from the nuns. She carries a satchel for staying somewhere overnight. In it there’s two sets of clothes, a sewing kit, medical supplies, ammo, and some food.

There’s more to her past than you think. But other than that, any secret is only for the most trusted allies.

She doesn't really believe in anything. A form of Agnosticism.