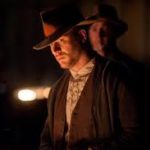 The legends say Christian was not born the way men are, but that he was created out of necessity. Dimness on Earth had grown into a dark, a tipping point, and the great spirits convened to do something about it. A veil had been cast, they saw, over humanity. So, the solution was simple:

It took what felt like hours for the villagers to find any words at all as they stood around the warm heap of ash that had once been a home, and a family, but those were their first. They remained, every one of them, still lingering from the spell of that enchanting prayer; for what else could it have been but a prayer? A prayer from a mother to save her child.

Hours before they had all crowded the small property, weapons and tools in hand, anger, and malice in their hearts. It was a betrayal beyond imagination, a blaspheme against faith that the head of their beloved church would make a baby with an unbeliever. A pagan. The two could have left – should have left – but they stayed in defiance to everything that was holy. They had brought this on themselves.

And so, no one asked who set the fire; they all watched it grow. No one removed the barricades, even when the heat and smoke edged them back for their own safety. But it was the prayer that held them there. It swelled over the sound of the wood burning, ignorant of pain or discomfort, in that savage dialect they knew so little of. It held them, for as long as it went on, and for long after. The fire raged for hours and died by dawn. It was then that they found him: the baby, the very reason for their hate, wiggling quietly in the ash.

But who would? As a crowd they had all killed. But who would stand individually and undo what some higher force clearly sought to be done? Not one among them. So, they adopted they child, and named him for the faith they preferred.

The pair froze among the hanging animal skins and shrubbery for only a moment. And in that moment, they both understood that the hunter was not there to kill her. This meant he needed to be careful with what he did next.

“They don’t usually walk so far, for so long. But here you are.”

The witch referred not so much to his journey of miles to get here, but to the years he walked the Earth. Like Christian, witches saw things differently from other men. But unlike Christian, they were all too aware of it.

“Careful, Veil.” The Hunter breathed the words in a gruff tone as the old woman approached. It was a bluff, and she knew it. The witch was beyond her time, wrinkled skin kept to her bones by a dysfunctional gathering of natural forces. Her heart pumped through her body by a different one entirely. The hunter could see it. A countable number of grey hairs hung from her head and dragged behind her. Not a tooth remained. It was a credit to her wisdom that she could mimic life at all.

“Veil!” The creature wailed as she walked around Christian. The hunter did not move.

“Before you they called me Enchantress. Woman of the Wood. Even the Old Witch. But the world has grown you freshly, to deny me any title.” She was behind him now, arms slipping under his. Boney fingers clawed his shirt into a fistful and untucked it from his pants. She lifted the fabric and drove her hands underneath, gliding them along his stomach and his chest, probing along his collar bone. Her skin was rubbery, like frog skin. Sensually she felt for him, and Christian’s face twisted in disgust, but he did not move. Instinct was kind enough to tell him when not to do something. For the Witch he knew seeing was one thing, but touching was very much another. She knew immediately upon looking at him that Christian was a Hunter, one of those cursed humans who could kill their superiors, and that he had lived for a long time. Just as Christian knew what she was. But after getting her hands on him, she must know much more. Things no mortal, not even Christian himself, could possibly know about him. And this was the point.

“Men before me mistook you for an enchantress, or an old woman, even a witch. But those are dead in you. I ain’t here to kill you because there is nothing here to kill.”

She liked him already. The Witch knew she could not eat him – he was of the sort that not even a ritual of her power could make the body parts useful to her — the moment she looked at him. This happened from time to time, it was not abnormal among Hunters. But feeling him – the old woman had only become more intrigued, because she could not see WHY she could not eat him. What the Hunter could or could not do, and what protected him, was nowhere in his mind. He was dim. There was something akin to magic at work. Power was not just beyond hers’, but beyond her potential. And yet, she could kill him; he was perfectly mortal.

She kept her hands on him, moving constantly, as though trying to draw the warmth from his body. There was plenty else in his head, the Hunter had lived a long life. But the Witch had become interested in what was not there. She could see his hunts, and his passions, but never his reason. It was not hidden – it simply was not there. Then, at once, she cast him away, shoving his large frame off with the strength of a young man. She gazed about, as though lights in the tiny hut had just come on.

“AHAH!” She cackled. Her wandering gaze became one of excitement. Her pride swelled, for she did not get this far by being powerful, but by being smart.

“I see! I see what you have done! What you keep hidden from all else. All else but me!” She shook a fist at the air and looked about the hut in general. “Make it a man because it has to be dumb. Make it large because it must kill. But you did not send him here, did you?” The witch shook a single finger on her boney fist.

Christian did not know who she was talking to, but he was sure no one was listening.

Then, her focus zeroed in on the Hunter once more. The finger pointed at him. “You!” her voice thundered. “You wandered here on your own will. You wondered her because you are mortal.” Then she smiled, wide. The gums were all rot and there was no tongue to be seen behind them. Only Black. The smile grew wider still, so wide the ends of her mouth seemed to disappear behind her head. Christian watched, curiously. He could hear her speaking, but it could not have been coming from her mouth, because it was not moving. The smile was getting wider but – no, the mouth was moving. It was opening. Wide. Impossibly wide.

“You came here because you have many lessons to learn. And you will not return until you have understood the powers that drive you. I curse you, human, with knowledge, and the means to hunt for it.”

It would do no good to run. Christian did not know what was happening, but he did know that. The blackness grew and grew.

Perhaps the Witch did eat him. Perhaps she had swallowed him whole and somehow, within her, existed this whole world. The witch had said something about how to return, but the Hunter had not really been listening.

In any case, the Witch’s stomach was apparently called Hellifyno.

"If it is, you don't need to believe in it: it is; and if it ain't, well then you ain't got nothing to worry about."