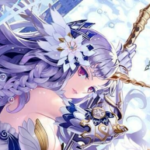 Her name is Chrysa Piscium, a 20 year old female mermaid. She's small with the height of 4'11". She's always seen wearing her pearl earrings and necklace. Unbeknownst to others, her earrings can turn into two silver daggers, while her necklace can turn into a trident which can help better control the water and communicate with living sea creatures..

As she was scorned by her own kind, she roamed alone around the ocean, living among the sea creatures. She’s friendly and cheerful, and usually wary of strangers. However, that changed when she met Asa from the deepest dark abyss. She woke up in an unfamiliar surrounding without knowing as to how and why she was dragged from her sand bed into the deep ocean. It was unfathomable however, because of this, she was able to meet Asa, her sweet new friend. He was always silent whenever she talked to him, however, she does not know why but she liked it. The tranquility and the silence he brings. the peace and the momentary pause in time is all she could ask for in this unchanging world. A wish that one day their paths would cross, Chyrsa ventured into an island with a quest to change her fate, from that of a mermaid into one that can walk.

Her quest a success, Chyrsa, the sweet medusa of the sea was left pining for what the world could bring her, with her new legs, armored body covered with transparent scales and her sweet and amiable nature. Her father brought her up with the values that her mother possessed. Although her kind is supposed to be cold blooded and uncaring, she was raised in the sweet comfort of her mother’s bosom and her father’s guidance.

Her hair is long and is decorated by a white ocean flower of unknown origins. Her tail is purple, it’s shiny and glitters whenever the sun shines towards it.

Two magical pair of pearl earrings and a necklace with one missing pearl.

Her singing can hypnotize people to do her bidding.

Hell hath no fury than a woman scorned.