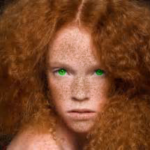 A Jaeger pilot (AKA) A Ranger for the PPDC

I am an open person!

I am Claire Beckett and I pilot a mark six Jaeger produced in 2021. I have recently lost my co-pilot when I crashed here in the Sierra Vigilant. She is a beautiful piece of machinery and the slickest design yet for any Jaeger, the Sierra Vigilant’s colours are grey, white and red. Her weapons are mostly hand to hand combat and plasma based weapons as the cut down on the spread of Kaiju Blue.

Claire is six foot three in height. She possesses the form of a female MMA fighter though as of recently she has become heavily pregnant, her stomach swells as if she has swallowed giant balloon! Claire’s face is fae like in it’s shape but the features are too imperfect to be anything but human. The young Jaeger pilot has eyes that are expressive and the most beautiful shade of green. Her face, neck, shoulders and arms are covered in freckles that added with her unruly mop of curly red hair makes this young woman a spectacular specimen!

A red and white blaster.
Symbiotic metals.
A bomber jacket covered in meaningful patches.
A hand made motorcycle.

If in our final hour we believe in each other then well will not fall.