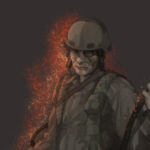 ” I’ve been in a lot of wars before.. The Revolutionary war…civil war… the great war… second world war… vietnam and afghanistan etc but i was known for bringing my men back alive..”

Captain Clifford Unger served in the United States Army  in the Special Forces before the Death Stranding, having fought in Iraq, Afghanistan, and many other countries and wars throughout history. He was known for consistently bringing back his unit alive and unscathed. Among his unit was a soldier known as John Blake McClane, who would later go by the name “Die-Hardman“, a moniker given to him because Cliff kept saving him and bringing him home. Eventually, Cliff fell in love with and married Lisa Bridges, and they conceived a son. Because of his impending fatherhood, Cliff left active duty to be with his family.

Following his return, Cliff and Lisa were involved in an accident, from which both came out alive, but with Lisa rendered brain dead and their unborn son at risk of death. Desperate to save his family, Cliff willingly brought them to Bridges for experimental procedures, not realizing what would become of his son. Lisa was put on life support to prevent her death and necrosis, and their baby inside a portable pod full of amniotic fluid, keeping him suspended in development until further notice.

Cliff gradually came to accept that his wife would never come back to him, and so turned his attention to his unborn son, whom he took to calling “BB”. Cliff bonded with his son, telling him stories, singing to him, and bringing him a cake for his would-be birth date. He also reconnected with John, who was working as security personnel for Bridges. However, Bridget Strand forced Cliff into putting BB through further experiments.

Eventually, John came to Cliff and warned him that Bridges would be moving BB to another facility. He claimed that despite his sworn allegiance to Bridget’s presidency, he wanted Cliff’s suffering to be over. Though he could not help Lisa, Die-Hardman wanted to give Cliff and his son a fighting chance at life, and offered him an opportunity to escape. However, he warned Cliff that if he caught him, he would be ordered to kill Cliff and would do so.

On the night of the escape attempt, Die-Hardman revealed that Lisa’s life support could not be taken offline, so Cliff would have to kill her himself. Providing him with a loaded revolver, Die-Hardman left Cliff to make a decision while the systems were down. Wrapping his gun in cloth, Cliff apologized to Lisa and swore to protect their son, kissing her and calling her his “Anomalisa”. He then put a pillow over her head and shot her twice. Cliff then took BB and fled the hospital room.

Making his way through the hospital, Cliff tried opening the exit doors, but they were locked automatically. An alarm went off and two guards stumbled upon him. Threatening to shoot BB, Cliff ran, but was shot through the back by several times by Bridges security. An intervening Die-Hardman caught up to Cliff bleeding out against a wall and tried to stop security forces from gunning him down. Cliff briefly used his friend as a shield, thanking him for his efforts to help, before retreating into Lisa’s room and shooting the electronic lock to seal security out briefly. Cliff apologized to his wife for his failure, and sang to BB as they waited for security to break into the room. Die-Hardman tried to divert them from the room, but Bridget ordered the doors to be forced open.

Cliff readied to take on the Bridges security personnel, but was quickly gunned down. In his final moments, Cliff took BB out of his pod and told him that abandoning his duty and being there for his family is what made him brave, and begged him to not make the same mistakes as him and to be free. After realizing BB had been removed from the pod, Bridget ordered Die-Hardman to execute Cliff. When he hesitated, Bridget grabbed his arm and pulled the trigger of his gun, shooting Cliff in the chest and killing him, as well as BB. This led Bridget to defer to her “ka”, Amelie, on the Beach, who healed and repatriated BB – an act that allowed the BTs to cross over from the other side and precipitated the Death Stranding. 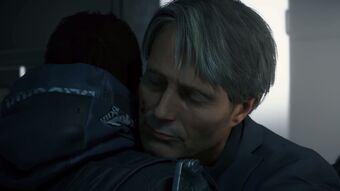 Cliff embraces his son
Cliff would continue on as the restless beached “Combat Veteran”, obsessed with reuniting with his BB. Unlike other BTs, he retains both a human form and his intelligence, and with it, a great amount of tactical ability. On a war-torn Beach entered through supercells, he regularly attacks the adult Sam, mistaking Lou for his BB and wanting to take the bridge baby away. In his final confrontation with Sam as the Combat Veteran, Cliff realizes Lou is not his BB and comes to acknowledge Sam as his “bridge to the future”. He is reunited with his son one last time in a metaphysical reenactment of the day they both died, wherein he is allowed an intermission of respite to embrace his son before he is shot dead as he was in the past 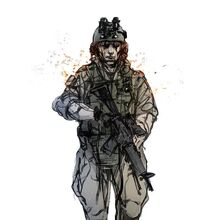 On the Beach, Cliff is capable of controlling skeletal, glowing-eyed soldiers through a series of black cables emerging from himself. They are shown to follow all of his orders without hesitation. After being summoned, Cliff can sever the cables to send the soldiers out further without breaking his connection with them. Often, the soldiers take up tactical positions to guard the area Cliff is patrolling or surveying, and when first summoned from tar, they surround Cliff defensively. He seems to control them using tactical orders, calling back to his experience of leading his special forces unit. Once slain, they disintegrate into embers and return to Cliff’s position.