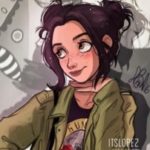 single as a pringle

When i was young my parents tried to throw me into the river saying i was a “a cursed child”, but i was saved by a girl named Hana who had also saved two other children named Clink and Yuna. Sadly Hana was murdered and the three kids were on their own for then on. Yuna ended up getting lost somewhere in Boston and the two other kids, Clover and Clink made their way to Gotham city where they stay now. Clink takes care of Clover through he is a bit abusive torwards her.

5’2, always wearing a corset, black short hair and big green eyes, scars all over her body from being abused, but yet is still pretty