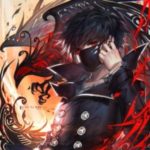 Traits: Has Anger Issues, Can Be A Romantic, Extremely Aggressive

Aggressiveness: He can be extremely Aggressive torwards people he doesn’t know or doesn’t trust. He generally dislikes waiting and being told no.

Childishness: There isn’t really a known reason for why he sometimes acts like a child, but the most likely cause is God Complex.

Depression: A close lover was murdered because of him.

False Invincibility: The reason for his false sense of invincibility is due to his God Complex. He thinks he is invincible and all-powerful. While he IS alarmingly powerful, he is NOT all powerful nor invincible.

Fell in love but demon hunters that were after him had killed her to anger him and provoke him. Enraged, he slaughtered them all and now he’s on road, trying to get over the loss of his lover. After years of training to get stronger, he has gained the extremely powerful ability “Requip,” as well as gaining full control over his ArchDemon powers. He has also become an expert in magic. At least, in his profession. [Update to Present Day] Now, Cole found a dungeon where Lucifer was keeping prisoners and soldiers that refused to fight, torturing them for his own enjoyment and entertainment. Cole confronts Lucifer, and Lucifer decides to fight Cole. He fights and kills Lucifer, and inherits his powers. But unable to control them, they overpower him and now he starts to randomly heat up to lethal temperatures (at least to anyone except him), and he has started letting off waves of raw, extreme power, easily detectable by the untrained scanner. It is even (in some cases) physically able to be felt if the wave gets powerful enough. There has not been a case in which the power has become so raw and pure, that the wave has killed anything. When Lucifer’s army finds out their leader was killed by their general (Cole), they attack him, not knowing that below their feet were their dead brothers and sisters, beaten, abused, starved, and killed. Cole barely manages to fight of the army of 5,000 demons, but he used his newfound powers, to slaughter them in a long and difficult and bloody battle. He is severely wounded. [Update, 2 years later] He has finally gained control over his powers, and can use them flawlessly in battle. He is now more dangerous and ready for anything.

Eyes: Blue, steely (does vary depending on his mood)

Hair: Black and messy (does vary depending on his mood)

Number of Wings: 4 (He is unique in this way, as no demon across the multiverse has ever been recorded to have four wings)

Has the ability “Requip,” allowing access to over 100 different armors and weapons. Can transform into his much, much more powerful ArchDemon form. Can control fire and how it acts. [Update] He now has the abilities of Demon King. He now has another form, transcending above ArchDemon, he can now shift into Demon King form.

He is not a Pureblood like he says he is……

that there was not a reason for anything to exist. It just does.