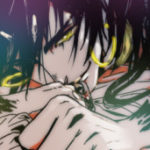 
It was a story born of both tragedy and unwarranted death. Nephlune was the name of the now lost Kingdom, swept under the raging currents of the unforgiving sea. However once a prospering land full of fortune, love, and most valued; magic — now was a lost memory both to the world and history. Nephlune grew to be one of the first land’s upon a mystical spot of land. Formed not from volcanic influence, nor from shifts in the earth itself, the imaginative creation of this land hides behind the now submerged and lost practices of the land’s people. Despite being a great trading port and a power-play in the world’s economics of such, this is more than likely why Nephlune was eventually lost beneath violent waves. Many today still chalk it up to be as mysterious a circumstance as the establishment of the land, however foul play remains a large suspect for those who survived. 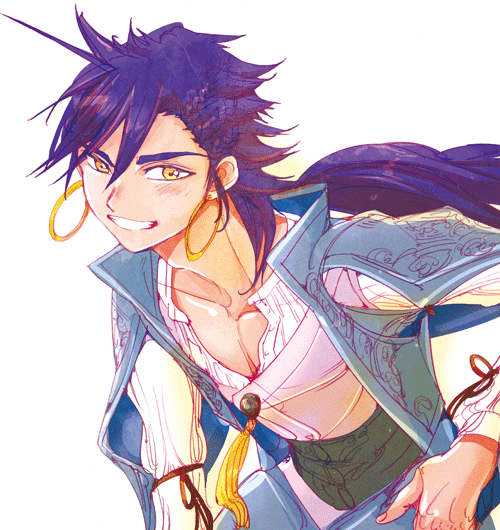 He was the last prince to the late King of Nephlune. Named after influence of Western History and the philosophers of the past, Silas was born within the city and bred high-hopes due to what its people would call the influence of the Gods. He was blessed by the magic and practice of the people, and through this, his birth brought hope to the people of Nephlune that they would prosper and become a city of legends. Silas possessed the same ability as his father — while foreigners are left wondering what brings about this magical ability of its citizens, it was the upstanding orb that also played a part in keeping Nephlune afloat. This magical ability granted people like Silas, battle-changing powers. On top of already inhumane physical abilities, Silas is able to tap into a explosive transformation that remains in tune with his soul and is shaped by both how his mind and soul work. Silas unfortunately, would only be able to discover the extent of his abilities outside of his city. He would only be eight years old when his city would finally encounter the crisis that would wipe over half of the population including his mother and baby sister. With quick work, the Royal Guard would help both the King & Silas escape the catastrophe through ships, harrowing through a horrible storm wrought after the sinking of the city. Leaving behind their Golden Land and by which those on board treasured, the people who remained of Nephlune were broken. Many had lost their families, their homes, friends. They were cast now to work in other countries, forever mocked for their once reigning superiority; now swept under harsh waves. It wouldn’t be long until Silas’ father would grow sick. Only a year after they escaped their home’s destruction, the King fell sick and bedridden. While seen only as a sickness by some, the King warned Silas that his passing and the destruction of their home was the work of an outside influence.

Now more than ever, Silas remains diligent in trying to find out what happened to his country. His discoveries and the uncovering a dark past surrounding both his family and those outside of him will both help him grow into the image of what would be his country’s next King, and a warrior bred of horrible circumstances.

SHERNOS: The god representing both the island of Nephlune and the sea at whole. His influence has created life not only for sea creatures, but he birthed the great island and society of Nephlune. In his own image, he wanted much like the other Gods to be proud of an advancing species, capable of utilizing skill & knowledge to further advance with the world. Unfortunately, for reasons yet to be revealed, he had become extremely disappointed with Nephlune after the incident that showed extreme disrespect to his presence. With the growing influence of the world around him showing true human nature, he became unforgiving in his wrath against Nephlune, almost immediately casting it into the watery depths. He watches over Silas’ adventure, testing the male in his attempt to redeem his fallen homeland.

EMBIUM: One of Nephlune’s watching Gods. He controlled storms, having deterred much warfare in the past from reaching the shores of the land before it was sunk. Much like the others, he favored Nephlune and adored the people. He was lost in despair for quite some time at the destruction of the land. In an attempt to regain that which he had loved and given most of his pride to nourishing, he becomes one of Silas’ most reliable allies. He teaches Silas the ability to use the possession of their Godly influence over his body to mystically transform into a mirror-like form of the God, though resembling Silas. He is Silas’ most go-to transformation, having been mastered quickly after the discovery.

NETIA: The Goddess of Logic who also played a role in the creation of the human-like species in Nephlune. While Shernos had created the land, created the magic to uphold their abilities, and gave utility, Netia had shaped the foundation of the super-humans residing within this land. By request of Shernos, she could not create a perfect species… so she bestowed upon the land, human-like beings who thought and acted like humans. Capable of positive and negative, so that they could watch the humans overcome differences or fight. She spread influence, yet she played no role in the fall of Nephlune. Although she wasn’t punished, she is heavily judged by the other divinity in their suspicions. To help Silas in his adventure and to prove her innocence, she grants him one of the most difficult transformations to handle. A form capable of combining the nature of positive & negative emotions into pure and destructive power. Not only does this form place immense strain under the body of Silas who has yet to master her form, but its power relies on his ability to constantly take emotion and turn it into different and balanced forms of power. If he can balance neutrality between these, he might conquer the path to this form. 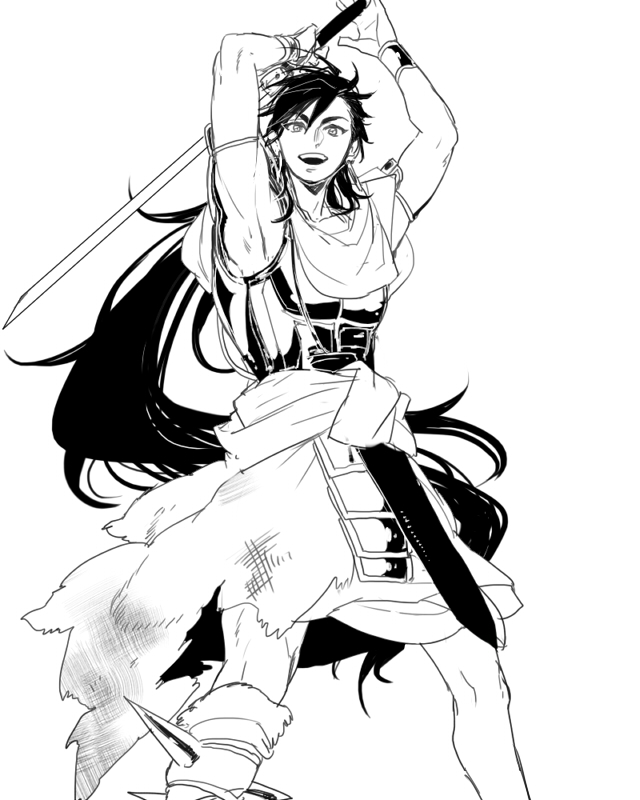 Silas is a young man with masculine features. Being born both the prince of his country, and raised a man of the seas, he is often depicted in both with distinct features. For one, many of his clothes possess gems and other artifacts that signify his importance and forthcoming as a representative and candidate for King within his country. However another is his ignorance to how long his hair becomes, or the radiance of some of his clothes being comparable to a pirate’s outerwear. Silas has extremely long purple hair, reaching down past his waist. Even at a young age, he is extremely tall, reaching nearly six-feet in height. He has a muscular build, yet remains rather slim despite so, allowing for very nimble and unrestricted movement. He had light-toned skin, yet now remains tanned due to his openness to the sun while out at sea so frequently. 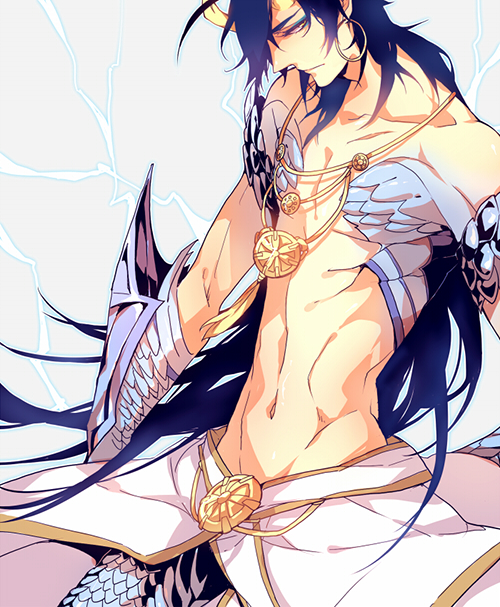 EMBIUM: Silas is in possession of two transformation sequences, though he relies on one most of the time due to his inexperience with the other and how difficult it can be. His favored transformation coats Silas in a blue armor on important parts of the body, creating a scale-like design. To represent the God tied with this transformation, he is given two sharp and golden horns on either alignment of his head, and his hair that was once a violet-purple now radiates a lightning-blue. His eyes, now not their amethyst glow are an intimidating gold. The abilities of this transformation of course are associated with the element of lightning and possess extremely destructive capabilities. 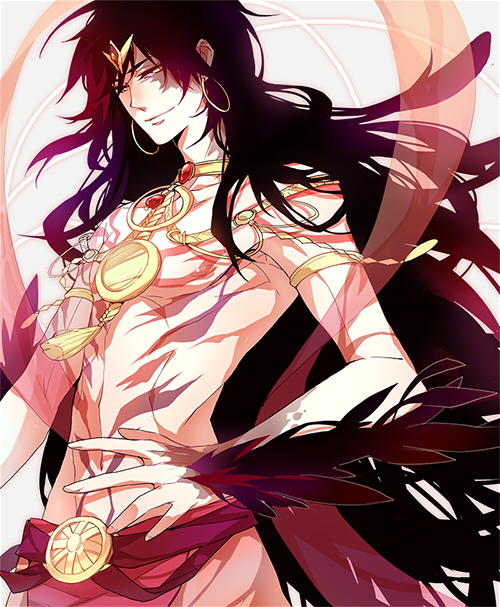 NETIA: Silas’ second transformation is extremely rare to see due to the user being inexperienced with the burden put upon him by the transformation and influence of the God associated with such. Silas takes on a dark exterior on this transformation, blanketed in a multitude of colors ranging from crimson-red to fully black. Feather’s cover parts of his body needed, much like his prior transformation, and scars bred of both light and dark proportions align down opposite sides of his abdomen. His once amethyst-colored eyes now become again, a golden and intimidating glow, while his hair now darkens itself completely black, to create a long and harrowing shadow to cover his approach. This transformation is capable of many destructive and manipulative abilities, thus warranting its harsh consequences upon Silas for using it without being entirely prepared. Silas plans to use this transformation more frequently when he understands the history and purpose of its usage.