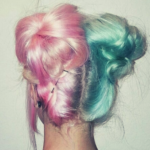 Personality: She’s a gentle, tender spirit despite what she was exactly created for. Very loyal to those she holds close, as well as nearly any who share information of this world to her as she still is moderately new. Trusting, perhaps too much for her good. She tends to space out quite a lot, and just let the voices take over her mind for a moment, allowing them to spew their ideas and thoughts. She can be a bit clingy but fully understands the limits. Pessimistic, even if it doesn’t seem so at first. Slight anger issues are a given, though few know just what buttons to truly push. Somewhat insecure within her more humanoid form considering the number of flaws it holds, though she’s learning to get over them slowly.

Al tarf Beta Cancri, but you can call me Cancri! Or whatever you want.

Long story short; the five stars of the 12th zodiac constellation all exploded, the last being the brightest (Altarf). The god of stars chose to give her and the rest of the constellations another chance at life, which resulted in her becoming human-like. All were named after their brightest stars, hers being the Altarf Beta Cancri.

As a star, she doesn’t remember much considering stars don’t have memory systems; she remembers very little, but remembers some none the less. She doesn’t remember the first couple of hundreds of years, nothing really happened, so she chose to erase those memories. She does remember the first star to blow up around her, however; Lota Cancri, the farthest from her. Right after, the Asellus Borealis, then the Asellus Australis, and so on. This change reaction left her momentarily dead, as well as her fellow constellations. They were all given a second chance, taking the forms of humans-.. Well, not entirely. She was given spilt colored hair, left was a silvery blue, the right with a peach-y color. Her eyes a light purple, no pupils however. She feels weightless, sort of mocking the dark void that humans know as space. She also seems to be twenty, except in reality she could easily be over thousands for years old. There are silver colored tribal tattoos all along her body, two show themselves more than others. One being a crab with the cancer (zodiac) symbol in the middle, on the back of her hand. The other would be the moon phases along her collar bone. She’s a very shy and gentle soul, that tries to put others’ happiness before her own. Out of all the zodiacs, she got stuck with being very emotional and sensitive; leaving her rather insecure and clingy.

Stars are made of plasma, a very hot substance, as well as have their own form of gravity. After each star blew up, the plasma that hadn’t already burned out had formed together, creating a new star; very unstable, however. The only way to contain it was to force it somewhere else, were it could live without being a danger to those around it. This ‘star’ had found its bodies, well parts of them and their memories. Some had been demons, others mages, and some human; leaving her body a hot mess. Her neck and above had been this sickly green color, white orbs with swamp colored hair, as well as a black ram-like horn; this one had probably been a demon of sorts. Her right arm and down the right side of her torso would completely be scaled over by pearlescent scales; they were probably from a hybrid, made a half-human, half-koi fish. The left arm would look to have severe burn marking running up and down it, as well as a blue tint to the skin. The left part of her torso, however, would have large ice burns all over, and a pink tint to it; they both seemed to come from siblings of sorts. There would be one area on the chest that wasn’t completely fucked, it seemed to be a circular object with wires coming from it, sitting in the middle of her chest. It was the only thing keeping her organs working, it was more of a light blue stone with healing abilities more than anything. Her right leg would only go to mid-thigh, the rest looked to be ripped off. It would also have wires of all sorts of colors coming out of it, sparking every now and again, as well as torn muscles attaching themselves to what looked to be a shadow in the shape of a human leg. The other leg would actually be there, a large chunk of the thigh appeared to her missing -as well as rotting, the same robotic parts taking the chunks place.

Someone had come along, not sure whether they had been a god of sorts or not, had fixed her body. She choses to believe it was a god, at the time she had nothing to believe or hope for so she settled on that. The person’s actions at made her into what her appearance is now. Her appearance will never be perfect, the base of a body, the head of a demon, arms of a hybrid and twins, legs of a rotting corpse; not to forget about the plasma infused blood. She has the same organs as a human, same weak lungs, same broken heart, and fucked up brain. Her body looked somewhat normal for the most part, pale complexation, soft purple eyes, spilt colored hair, and the markings. The markings weren’t supposed to be there. They were a punishment given to her whenever she screwed up while using this body. She lived amongst the stars for the first, possibly hundreds of years, and there she learned how to control her abilities and function as a human. The markings were burns, with a similar picture engraved into her skin as to what she did wrong. The crab; just another way of saying that she can’t fight without armor because of how weak she was. The water with a human standing & crying in it; another way of saying how weak she was, how much of a crybaby she was. The stars; she could never seem to pay much attention, staring off into nowhere. And many more markings, to many to count and go over every last story. Originally the were a pink-red color, they seemed to be painted over in a way, trying to hide what they were there for.

Each star that was apart of her had a life before then. They were all once living, they had their own lives, friends, family, etc. Those stars could’ve easily been up there for thousands to millions of years, the memories of these past lives slowly weathering away. This left her with five different stories, each having their own problems, holes were time had struck. When her body was re-forming the memories of those dead were given to her, forcing her to re-live every bit of pain and sadness the person had to go through; as well as their happiest memories. The green-demon looking part had come from a Hantu Kopek (Female nightmare demon.) that had possessed a human and ended up dying with that body. She had died from a exorcism, not a normal one. One that required a lot of bloodshed and guts, ending in the death of both. The scales came from a male, koi mermaid, that had completely white scales. He wasn’t like the pretty mermaids you see on tv, he had no hair or eyelids, sharp teeth, and blood stained skin/scales. He died in battle. The burns (fire/ice) had come from twins, one of the few Cancri actually knew the name of. Griffin, the sister, and Phoenix, the brother. Griffin was a hybrid of sorts, her half being a snowy owl, and the other was an ice mage. Phoenix was quite the opposite, his half being -of course- a phoenix, and the other being a fire mage. The ice tinted skin with Phoenix’s burn made no real sense however, neither did Griffin’s pink skin and ice burns. Both died of overdoing their abilities in battle, causing both of them to sort of explode. Burning both severely and killing them. The rotten parts came from a female, who was injured badly in a war; huge sections of her body being replaced by other’s from fallen solider, as well as going through a shit-ton of testing. There was a slight malfunction, that ended with her vital organs shutting down, then setting fire. Cancri is female because of that was the majority of the souls that had joined the constellation she was created from.

Hair: Frilled bangs with messy spaces buns, the color spilt in half; one side being a silvery blue color (left) and the other being a light pink color (right).
Eyes: Lilac colored eyes.
Skin: Pale
Height: 5’3
Weight: Undetermined, but feels weightless.
Age: Also undetermined. Looks around 20, could possible be thousands of years old.
Tattoo(s): Silver markings (burns) that run from her hands up to her eldow (left) or all the way up to her shoulder (right).
Other: Circular, pearly colored, framed glasses (mostly for reading.)
Normal outfit: White and light gray striped sweater, tucked into a dark gray, pleated skirt, and matching cross-body bag & converse. Mostly anything of the gray-spectrum, or monotoned to not contrast too much with her hair.

Age: Depends on which part of the body you are looking at.

Other: One black horn of the right side of her head.

Clothes: Doesn’t really wear any (due to the fact she lived/was created in the middle of space.). But does sometimes wear a skin tight black croptop/sports bra, and matching shorts.

-A bottle of silver paint/ink

Sparrow (Female), who is also very protective. A white kitten with light gray paws, and crystal blue eyes. She doesn’t like many, but those she does, she copies. Her fur (for Cancri) will try to take the physical appearance of her, spilt colored fur, left blue, and right a pink.

Wren (Male), calm and more relaxed than his older sister. A light gray kitten, white sock looking patterns, and light green eyes. He doesn’t really like being around others but doesn’t mind them, or attack them like his sister. His ability is that he can change his physical form (solid to liquid, gas/smoke, and shadows.). Normally only use it when he is bored or feeling threatened.

Not much of a secret but, doesn’t understand a lot about humans -well, their emotions mostly.

The we call oursevles gods, based off of strength and power -But in reality, are mental states and emotions make us weaker than we realise.