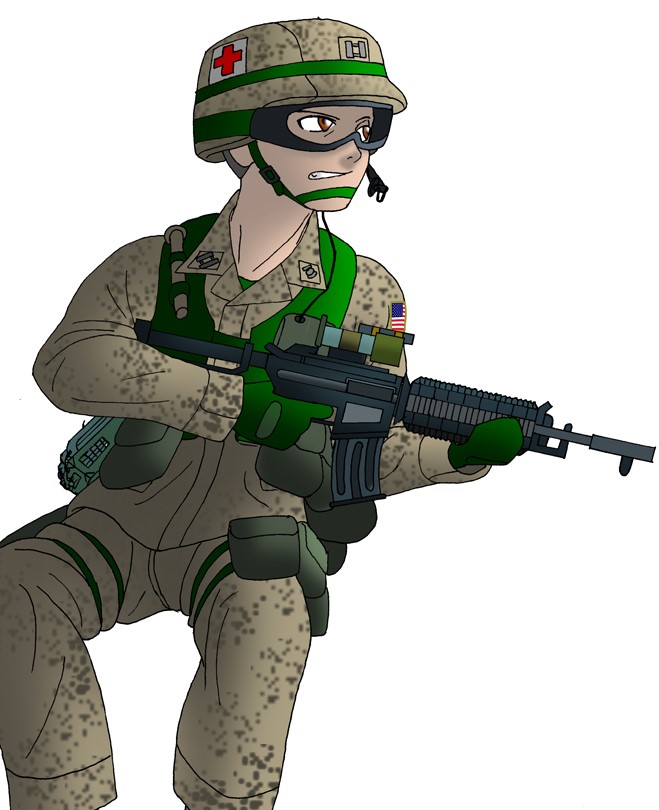 Natik Health: Combat medic and all around good guy. Natik would give you the shirt off his back if you asked and beat you to a bloody pulp before filling you full of bullet holes if you step out of line, and all in the same five minutes. His duty to help others comes first and his own life second. Natik’s peace by force begins where his understanding and help ends.

Dakota Amit: Dakota is a small element in a very large team, nonetheless, he usually works directly under Natik’s careful eye. Natik had saved Dakota once, and ever since it’s been returning the favor back and forth in combat. Dakota is a weapons specialist, and carries the big guns in the battle. 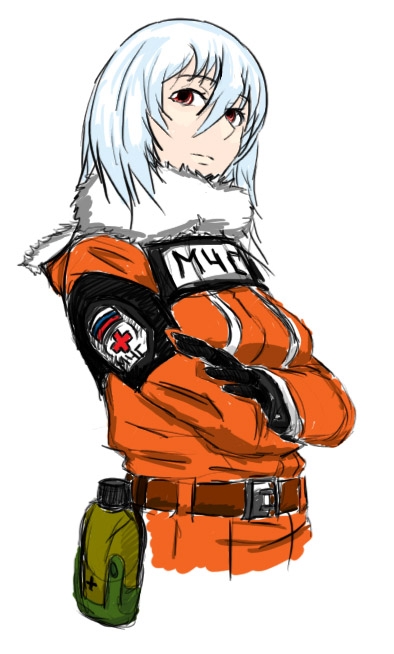 Oshea Ward: If Natik had been a pilot, Dakota would be his navigator, and Oshea would be his wingman. Oshea grew up in a very remote area and driven by the same urge to help other, she became a Search and Rescue (SAR) operative. Oshea would later join the military and do medical evacuations in some pretty hairy situations, which is how she met Natik. They’ve been partners on the job and good friends off the job ever since. 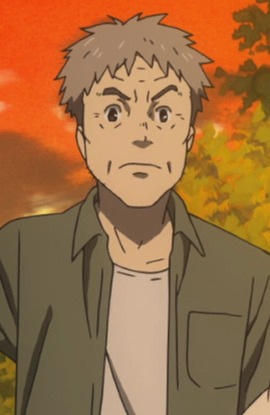 Ace Mitra: Ace is Natik’s uncle. Ace is ex-military and extremely wise though in his old age he’s become quite calm, yet able to hate pretty much anyone he doesn’t know very well. It’s not uncommon for Ace to seem quite cold but like the rest of his family and the people they associate with, he’d give you the shirt off his back and feed you dinner too. 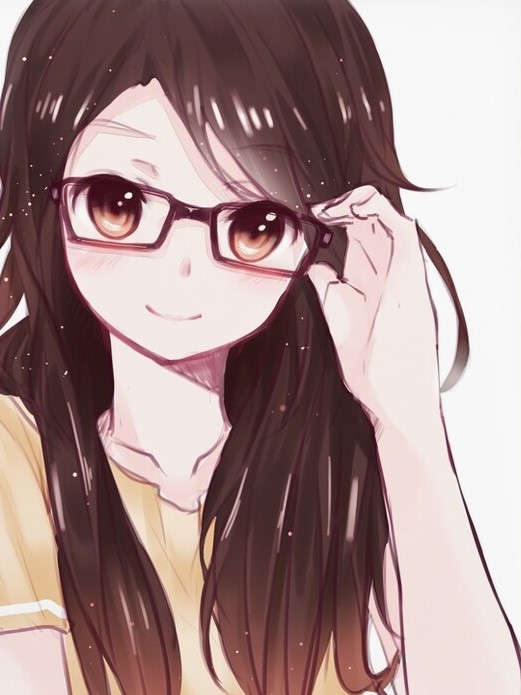 North Mitra: North is Ace’s 13 year old granddaughter. She is extremely kind and smart, though strength is something she is lacking. North is mentally tough if nothing else, having lost her parents at a young age. Despite being further relation, North calls Natik “Uncle Nat.” and views him as such. North is not one to engage in conversation unless spoken too first and would much rather be studying quantum physics and mixing together chemicals for fun.

Natik is the epitome of the underdog who’s on the right side. He grew up in a small town in the united states on earth. Natik tended to get into a lot of fights growing up, though usually on someone else’s behalf. When Natik turned 17 he joined the army as a combat medic. He climbed the ranks at a jaw dropping speed through battlefield promotions. Natik is pure human, and with such uses human technology, though as threats arise so do counters to them.

Dakota was an average soldier until Natik took him under his wing. In a field operation gone wrong Dakota was captured where he was supposed to be executed as an example, however Natik broke him free and they’ve been fighting together ever since. The only thing Dakota loves more than helping others is fighting the bad guys. Dakota is generally the combat expert of the group though Natik could probably hand his ass to him on a platter at the shooting range.

Oshea’s story is simple, yet it speaks volumes. She grew up in a remote area full of forest in the summer and snowy cliffs in the winter on the family ranch. A drive to help people compelled her to join a search and rescue team to find lost hikers and buried snowboarders. Eventually her knack for being able to find things with an extreme amount of skill and eyesight that eagles would envy landed her in the military doing medical evacuations in the worst situations you could imagine. This is where she met Natik and began working more closely with him on her own accord. Though Oshea is also a medic, her combat skills don’t even come close to Natik’s or Dakota’s, and she envies Natik’s medical abilities, but Oshea makes a spotter to be reckoned with, and if you get lost you can count on her to find you.

Anjelica Atom is the RnD specialist of the fireteam, she’s yet to be seen in public, though one can assume her strong point is her mental capacity.

Natik is usually dressed in the camo appropriate for the area, though occasionally he will dawn a dress uniform or civvy clothes. Natik is always armed visibly with a sidearm and often with a rifle as well. Natik always wears a backpack and often carries a knife as well. Sometimes in addition to Natik’s backpack he’ll carry an EMS bag with a large amount of medical supplies if he’s expecting to need it, though most of his necessary medical supplies will fit in his backpack. It’s not an uncommon sight to see Natik in combat gear such as a bullet proof vest or plate carrier.

Dakota’s appearance is similar to Natik’s. Dakota is always armed as well, usually with larger calibers than Natik. Dakota is almost always in combat gear being that he’s infantry and a war fighter. Dakota tends to be a bit rebellious in his uniform, trading his long sleeve BDUs for tank tops and his dress uniforms for business casual. Dakota often has a toothpick hanging out of his mouth, drawing comfort from the motion of putting something between his lips as he’s an ex-smoker.

Oshea is a bit different than both Natik and Dakota and much like them at the same time. Oshea usually isn’t armed unless she knows it’s necessary but is usually in combat gear and camo. It’s also common to see Oshea in very vivid colors, a habit made from being a search and rescue operative. She’s also always carrying a backpack. Oshea has an odd quirk of wearing a bandana around her neck, something she did as a child where she grew up in the remote wilderness.

Ace just kind of dresses as a normal human being would, being a retired veteran.

North tends to wear dresses on most days but it’s not uncommon to see her wearing jeans and a miscellaneous T-shirt either.

Natik: M4 rifle with an undermounted 40 mike-mike launcher, a side mounted laser pointer, a bayonet mount, a side mounted flashlight, and a top mounted low profile camera. A 45 caliber M1911. A backpack full of all the medical supplies he could ever need, the rope and cloth to tie up a hammock, and basic survival equipment such as a knife, a compass, a map, a flashlight, a lighter, and of course a radio. Natik also carries a Notebook that one can only guess what it contains.

Dakota: Guns, lots of guns. Dakota has access to any number of weapons so which one he has at the moment depends on how he feels that morning and the mission he is on. Otherwise Dakota also carries a 45 caliber M1911 and a number of glowsticks.

Oshea: The same medical supplies as Natik, though without the space taken by the consistent presence of a weapon she can afford to carry more non-essentials such as a laptop and more advanced survival equipment than Natik such as a hatchet and a collapsible shovel.

Ace: His wallet and a 9mm handgun.

North: A notepad, a pen, twenty bucks, a swiss army knife, and a smartphone.

Natik: I have nightmares of my battles

Oshea: Fuck secrets, if you like me great, if not kiss my ass.

Ace: I actually care, I just don’t want to get attached AND care because then I have to do something

North: I got a B on a test one time instead of an A

Natik: I'm being protected by guardian angels, Dakota: Natik is my guardian angel, Oshea: If you save two lives in your life you've made a difference bigger than yourself, Ace: People are semi-annoying, North: A pen is mightier than the sword