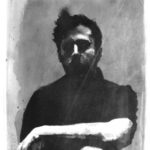 A guy with a weird vibe

Ever since he was a young child on Mars, inexplicable voices surrounded Mortimer. They talked to themselves, but sometimes they felt like his own. When he turned 6 poltergeists came. Objects in their home would fall from shelves. Hang weightless in the air only for him to see. Sometimes even shatter against the walls. His  pragmatic construction worker parents were sure their little boy was troubled. Having destructive impulses and blaming them on his imaginary friends. Exasperated by their son’s unhinged mind, they left him in an asylum for the mentally unstable. They paid regular visits at first. Yet looking him in the eyes became harder and harder with time, so Mort was abandoned there.

Mister Crane never for a second believed he was insane. The young martian was fixed on the goal of understanding his psyche. He read as much as he could. Trained his body, both through exercise and failed attempts to escape the facility. He even learned to meditate. And most important – Avoided the numbing meds like the plague. Years rolled by until the revelation came. Those voices were the thoughts of people around him. Brainwaves bombarding his own mind, much like auditory noise. The poltergeists were nothing but telekinetic lash outs of a tender psyche. Something to be controled and honed to the point of being an extension of his corporeal form. By the time he was 19 the prodigal psion had everything he needed to escape the asylum. No one even noticed the teen with the weirdly dizzying blank stare was gone.

The next decade Mortimer Crane spent on the streets of the domed Mars cities. Lying and cheating people out of their trust and credits was a way to get by. As well as a way to amuse himself. After all, he had the perfect tool set to be a conman. A self described con artist even. Along the way he met others like him, although their gifts were much different. Unfortunately these flukes of nature had been noticed by gene-grafting corporations that had the means and the incentive to hunt them effectively. Mort had already turned quite a few heads by getting more and more arrogant with his devilry. It costed him more than he was willing to pay.

Not wanting to be strapped down on a cold metal table and dissected he left Mars for good one fateful night. Posing as a crewman of a cargo cruiser he hitched a ride to a planet he had heard was a melting pot of weirdness.

Tattoos: An eye enclosed in concentric circles of cyphered text between the shoulder blades

• an old badge from the Hellifyno Guild of Heroes

• a pair of shades