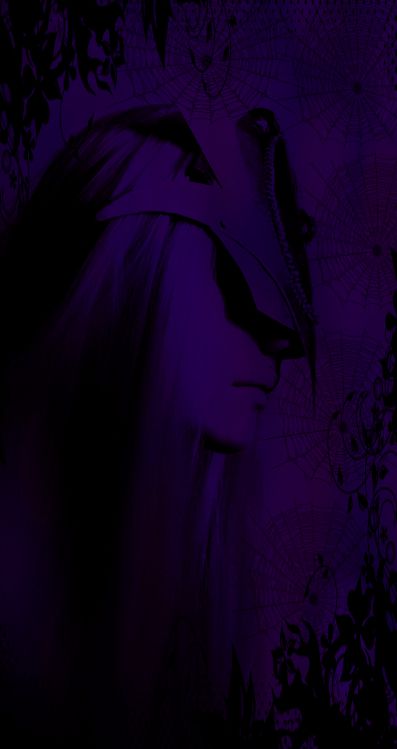 He likes to think that he is interested in none whatsoever, yet still partakes in pleasuring himself with sinful desires. He believes that his heart died alongside his previous lover.

* Brother – colleague – Sarihn
~ Lover ~ N/A
~ Personality ~ When under the influence of his black energy, he is cold, ill-tempered, short fused, and hateful. When he is sober of dark forces he is quite loyal, intelligent, sympathetic, fair, and sweet.
~ Likes ~ Soft things, innocence, truth,
~ Dislikes ~ Humans, his own anger, Arguing,

~ Creb’aidin’s Void – Desolare Tsillah ~ His home is a dark realm of it’s own, only a powerful mage could break into the dark void, unless given permission to enter. There rests a dark crystal-like fortress that’s spire shaped top pierces the sky. This fortress was once the one that held him prisoner at a time of peace. The dark magic coursing through him changed the once beautiful castle to the evil state that is now lies. The inside now a hollowed out cavern. Stalagmites and stalactites of dark shades filled its depths. The dungeon that Creb’aidin was tortured and enchained rests beneath the hollowed crypts of the castle. One would be considered trapped in the depths of this realm if he to leave one in the dark fortress. This was also the resting place of his previous lover.

Nothing at the time of imprisonment.

*Suit of armor bearing his families crest – Made of ebony and dragonscale. Darkness shifts through this armor, taunting anyone with dark powers that may lay their eyes upon it. The armor was cursed by the council of elven kings. Binding the soul of whoever’s blood touched it to its shadowy presence. They cursed it, hoping that Creb would be drawn into the armor, but to their demise his strength with the black magic surpassed their white energies and he admired the dark set, finding it useful for his violent actions. As souls were gathered, Creb’aidin would use them for experiments just as his biological parents had done. (Taken and supposedly destroyed by the new elven council of Kings after the death of Aeliestel. Was in Lorrenzius’s possession, but Creb has taken it back).

*Black energy ~ The ability to create and manipulate energy out of his emotions. It typically takes physical form of shadow-like tendrils, but will also take other forms as well. Purple electricity is usually present in the shadowy figure due to the friction of the energy. The tendrils suck energy from its victims. It could be blood, magic, or life-force (soul). It will drain its victims dry, feeding the energy to Creb’aidin whether he wishes to consume the energy or not.

* Hell’s fire ~ The ability to create and manipulate blue flames.

* Healing (White Magic) ~ The ability to heal minor wounds of those he touches using white magic.
* Healing (Black Magic) ~ The ability to heal others, or bring dead flesh back to life. Useful in situations against the undead.
* Raise the undead ~ This ability allows him to create undead beings and to control them. There is an upside to having his own army of undead, but the downside is that he can still fall victim to their hunger for life.
* Teleportation ~ The ability to gather energy around him to disappear into the shadows or void, allowing himself to relocate to whatever place fills his mind.
* Ebony wings – Heavy black feathered wings can appear from his back with a release of energy. Runes shaped in the design of the wings stretch across his back and shoulders like a tattoo, hiding the presence of the wings until he calls them out. (Affinity was granted after a demonic druid had healed his injuries with her own runes, causing his body to take in the demonic energy from her, creating his own runes).

*
~ Will add more when necessary ~

*When tempted by darkness, Creb’aidin’s dark side appears.
*He does have a heart, he just chooses not to listen anymore.
*Fear of constricted spaces due to his time being imprisoned as a statue.
*Desperately searches for something to put an end to his cold misery, whether it be death or a reason to live.
*His broken heart haunts him.
*Scars cover his purple skin, but is hidden by magic. The scars will only appear if he chooses to release his barricade of energy.

"Nothing changes.. Time simply moves on leaving it's mark on the world to torment us.."