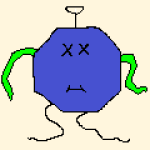 It’s been a while. A long, long while…

not a child anymore.

“I was born on Del.I arrived on Hellifyno at the Earth age of fifteen.I was involved in many wars, though I wasn’t sure what I was fighting for.I was a reckless and emotional child.I was in love many times.I lost many people.I made many friends.At the Earth age of eighteen, I packed my things and left. I was looking for something.I’m not sure what it was, but I must have found it, because I returned home after several years. I had grown. I had matured. I liked who I was far more than when I left.Consequence, the Consequence that I knew, was gone. So again, I left. Directions from strangers led me to the port, so I boarded a boat and waited.The boat docked in Persistence hours later.A few more hours of walking, I came upon the Red Sun Inn.And it goes from there…”

Short hair. An undercut hidden by a choppy bob, a striking difference from the long hair that once reached her ankles. She doesn’t keep up with it as well anymore. A simple ponytail for fighting. Combs it with her fingers rather than a brush. Her eyes are still heterochromatic, though they have darkened with maturity. Instead of solid emerald green, her left eye is now closer to a murky brown. Her right eye is a softer blue, grayer than it was years ago, and a small, white flame replaces her eyelashes on that eye. The flame extinguishes briefly when she cries or blinks. Her eyeliner is always smudged below her eyes, making her bags look heavier than they already are.Her clothes are more practical; gone is the miniskirt and tubetop. There’s heavier fabrics in her outfit now, and even her colors are brighter. She even wears armor finally, a plate that covers her neck, chest, and shoulderblades. She still wears highheeled boots (old habits die hard), but at the very least the heel is thicker, making them easier to run in. The boots, which lace up in the back, come up to just below her knee, and are discreetly plated to guard against attacks. Her usual garb includes underbust corsets, armored and flexibly boned. She is often seen in lace-backed shirts or long-sleeved crop tops, any kind of skirt or shorts with mismatched stockings. She wears a belt with a few tiny vials of gold and silver dust, as well as a knife holster strapped anywhere she can fit it into the outfit that day.Many scars, old scars, different sizes and appearances and locations. She’s covered in them, much like how one is after three wars. Over her right hand and forearm, cracked glass white lines spiderweb over her skin, making it appear paler than her left hand. On either side of her, above her left hip and below her right shoulder, are permanently-bruised scars in the shape of large dots; an impalement wound. A large, stylistic cross is burnt into a pinkish color on her back, a brand that has grown paler and cleaner with time. Puffy and discolored lines trace down each of her arms and legs, and along the edges of her fingers on both hands. Those are the ugliest scars, from a messy amputation of fins and webbing.

Her belongings are kept in a very old, very worn leather bag, held together by a cloth lining and a sloppy sewing job and maybe a bit of magic. The satchel is bottomless, holding anything that can fit through the opening. In it, she keeps many various books, and a journal with more pages torn out than written on.Around the strap is a silver bracelet, with a bird and a heart charm on it. Also decorating the bag are various buttons from jackets, safety pinned mementos of old friends.Nerignia, the exploding dust, kept in the vials of her belt.

there is a good in this world.